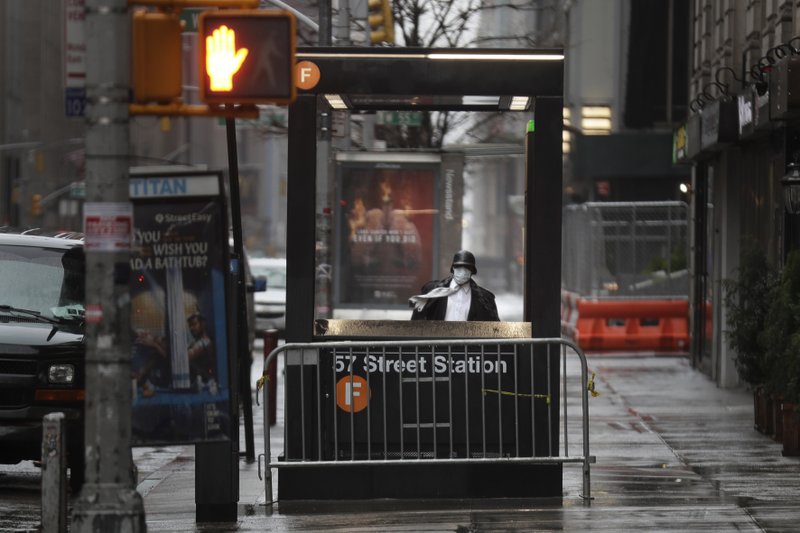 In this April 13, 2020 file photo, a man enters the subway on a rainy day in New York. New York City transit officials said they're providing buses for homeless people to shelter from unseasonably frigid temperatures this weekend during newly instituted overnight subway closures. The subway system has been shutting down from 1 to 5 a.m. since Wednesday, May 6, as part of an outbreak-related plan for daily train disinfecting. (Photo: AP)

It’s not the end of the line. But it once was.

When the first New York subway line connected Lower Manhattan to Harlem in 1904, the stop at 145th Street was its terminus. Since that inaugural run, the subway has never ceased running. There were brief blips of interruption after 9/11 and in the last decade for hurricanes and blizzards, but for more than 115 years, the rumbling on the rails has kept the click-clack heartbeat of New York. A second, tunneled city that, like the skyward metropolis above, never sleeps.

Last week, for the first time, the trains stopped running in a planned shutdown.Between the hours of 1 a.m. and 5 a.m., the subways and New York’s 472 stations began closing for a nightly cleaning to disinfect trains. It’s a humbling concession for a swaggering, all-night town that, as much as anything, shows how the coronavirus pandemic has seized the gears of New York, one of the world’s hardest hit cities.

On a recent late night, as the trains began to slow, the sole person on the platform at 145th Street was Joe Hall, a 58-year-old homeless man. He pushed a cart of plastic bottles and waited for one of the last downtown trains. Unwilling to go to a shelter (too dangerous, he said, because of the high rate of infection) and soon to be turned out of the subway, he planned to sleep on the street.

Except for commuters fleeing to the suburbs, the entire concept of “last train” is anathema in New York. London, sure. Boston, of course. Even Tokyo. But not in New York. Through the night, trains have always shuttled early-morning workers and late-night revelers. A four-hour shutdown may not seem like a drastic change given all the transformations wrought by the pandemic. But in New York, it means a tear in the fabric.

“Without the subway, New York does not work. People are saying now, ‘What happens if people drive after the epidemic has passed?’ Well, they can’t do it. If all the people who wanted to drive in New York drove, you’d have to pave over Long Island to park all of the cars,” says Kenneth T. Jackson, a history professor at Columbia and author of “Empire City: New York Through the Centuries.” “It’s more important than the public schools. It’s more important than anything.”

Even at a time when New York remains on lockdown, stopping the subway for even four hours has an enormous effect. Ridership in April was down more than 90%, but the Metropolitan Transportation Authority still estimates that 11,000 people had been using the trains during that overnight period. Many are essential workers and others — caregivers, custodians — can’t afford not to work.

“You see the growing gap between the haves and have-nots everywhere in New York City. This really rips that Band-Aid off,” says Clifton Hood, author of “722 Miles: The Building of the Subways and How They Transformed New York.” “Most professionals are, by and large, able to work from home. What you’re seeing now is the people who had no other choice.”

The homeless have borne the brunt of the shutdown. Typically, some 2,000 homeless people rely on trains as a warm place to pass the night. Now, at 1 a.m., they’re met at end-of-the-line stations by police (some 1,000 officers were used for the first night’s shutdown), hundreds of cleaners and a handful of outreach workers who can steer people to shelters or hospitals. On the first night, 139 of the 252 homeless people engaged accepted some support, the city said.

Giselle Routhier, policy director for the Coalition for the Homeless, believes the city needs to do more, and supply homeless people with hotel rooms. Particularly after Gov. Andrew Cuomo referred to a Daily News photo of a homeless person sleeping on the train as “disgusting,” Routhier sees an effort to eradicate homeless people from one of their few refuges.

“People are afraid for their lives, and they’re taking refuge in the subways because they feel it’s the safest option for them. What the city’s doing now is using the police to move people to the streets and further out into the open,” says Routhier. “It’s a visible manifestation of our policy failures to address homelessness.”

Sarah Feinberg, the interim president of the MTA, says it can’t be the transit system’s duty to care for the homeless.

Feinberg, who took over in February from the popular Andy Byford, who resigned after he clashed with Cuomo, never expected to be the one to make history in shutting down New York’s subway system.

“It’s bittersweet to close the system for even a minute,” she says.

At the elevated Woodlawn stop in the Bronx, near the famous cemetery where some of New York’s dead from COVID-19 have been buried, transit workers cheerfully elbow-bumped as they passed one another, easily outnumbering the few passengers disembarking. Roberto Rosario, a 53-year-old MTA worker, was happy to be above ground and upbeat about the nightly shutdown.

“I’ve never seen the trains so clean,” he said.

More than 100 transit workers in New York have been killed by complications related to the virus. Bus drivers, who are being used to keep service running between 1-5 a.m., have had it especially hard.

Sarah Kaufman, associate director of NYU’s Rudin Center for Transportation, thinks this could be an opportunity for New York to explore alternative modes of transportation, possibly expanding the CitiBike bike-share program or the car-free open streets movement.

Cities around the world are contemplating how they safely function with more normal levels of ridership. New York’s subways were already under criticism for overcrowding; some 5 million use New York’s transit system on an average weekday. Current social distancing protocols would not be feasible, says Feinberg.

“We have to depend on the medical experts to start to give good solid advice on how folks return to a public transit system,” Feinberg says. “I don’t think anybody feels like they really know when ridership will come back and at what level. It will come back. We have no option in New York City.”

For now, the arteries of New York remain momentarily blocked. The city sleeps, so long as the sound of sirens doesn’t wake it. Along lines like the 7 train, nicknamed “the international express” for its pathway through the immigrant neighborhoods of Queens, it’s as if separate countries have been marooned from one another.

But as hard as it is to imagine New York, in all its diversity and density, reanimated, it will happen, historians say confidently. A mass of humanity will again board the express. After 9/11, some predicted the end of the skyscraper and that people would fearfully turn away from turnstiles. Instead, a building boom followed and ridership soared.

“I prefer to think about the shutdown as more akin to a spring cleaning than an augury of doom,” says Mike Wallace, author of “Gotham: A History of New York City to 1898.”“For all the horror of the last weeks, New York has weathered other calamities and its resilience should not be underestimated.”