CULTURE In the belly of the dragon

In the belly of the dragon 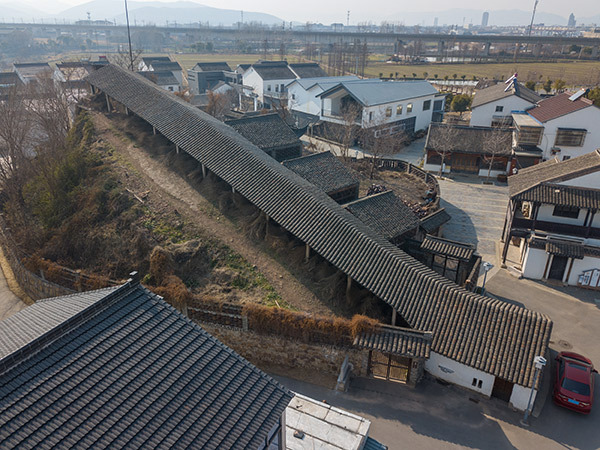 A bird's eye view of the Qianshu Dragon Kiln, a 600-year-old installation for ceramic making, which is still in use today. (Photos: China Daily)

Since the Ming Dynasty (1368-1644), the city of Yixing has been an important center for ceramic production in China. Kilns could once be found in Qinglong (Green Dragon) Mountain, Huanglong (Yellow Dragon) Mountain, Shushan, Qianluo and other places.

Over the centuries many of the ancient kilns have been lost, but in Qianshu, a village in Dingshu town of Yixing, Jiangsu province, a traditional dragon kiln has survived. Several times a year smoke can even be seen rising from the mountain ridge, emanating from that 600-year-old kiln. It stands alone, the sole kiln in Yixing that produces ceramics using the traditional method.

"The last time we lit up the fire in here, China Central Television came up to make a video of us," says Zhao Chunqiang, a young caretaker of the Qianshu Dragon Kiln.

"The reason we light it up only a few times a year is that it costs so much. The dragon kiln costs as much as 1 million yuan for each use."

Dragon Kiln, or Long Yao, is a unique type of kiln for ceramic production often found in southern China.

Usually built along the steep slope of a hill, the kiln spreads long and thin upward, like a dragon crouching on the hill, with its head at the bottom and tail tilting at the top.

Qianshu Dragon Kiln is 43.5 meters long and sits on a human-made slope. Inside is a long-arched tunnel space with 42 holes on either side, through which firewood is thrown in. On the western side are five larger holes where people step in to place objects needing to be baked, the entrances so small that a grown-up needs to bend down to get in.

Fire is lit from the bottom, where the dragon head was supposed to rest. When it is not in use, a small pool of water is always kept.

"Folklore has it that the dragon delights in having a bit of water near its head," Zhao says. 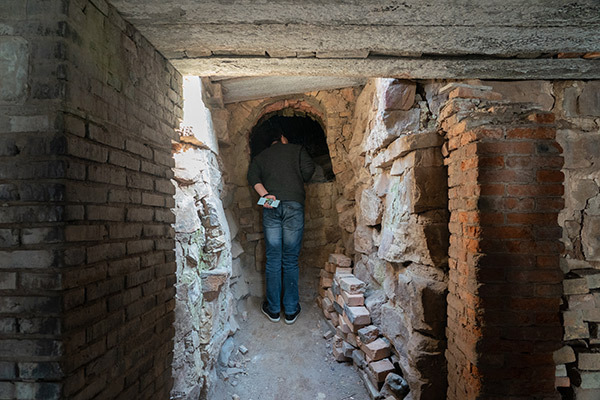 Qianshu Dragon Kiln has holes on the side walls, where workers feed firewoods to keep the interior temperature as high as 1,200 C for 40 hours.

Since the 1970s coal has been used in the lighting process, but the main fuel is always firewood, preferably pine or bamboo. A keen watch needs to be kept on the kiln day and night, with fuels being fed to it constantly to keep the fire burning at full power for 40 hours. The temperature in the kiln can be as high as 1,200 C.

Workers invented a special stool, with its feet cut to fit its tilting positioning along the slope, enabling them to sit down for a rest during the long working hours spent near the fire.

"These stools are a trademark of the unique practice of Yixing ceramic making," Zhao says at the entrance of an exhibition hall by the Qianshu Dragon Kiln. Dozens of wooden stools with tilted feet are placed on the wall near the gate, greeting visitors.

Teapots and other objects are placed in protective boxes before they are baked in the kiln. These rough clay boxes can be used no more than five times before they crack and have to be discarded.

The fuel and human power costs are much higher than what modern electricity kilns require. In addition, the success rate is much lower, Zhao says, pointing at a defective urn with glaze dripping on the side.

"In a traditional wood-burning kiln the temperature is not strictly under control, so sometimes accidents happened, and the dancing ash caused imperfections on large jars and urns unprotected by the boxes."

Even when it is used, "Qianshu Dragon Kiln now produces mainly daily utensils such as urns, jars, pots and so on", Zhou Xiaodong, director of the China Purple Clay Museum and Yixing Ceramic Museum, wrote in an essay on ancient ceramic making in the area.

The kiln "well preserved the structure and processing method for ceramic production in ancient China", he said in the essay.

"It is a rare and precious object for the research of ceramic history in Yixing."