CULTURE In the deserts of Dubai, salmon farming thrives

In the deserts of Dubai, salmon farming thrives 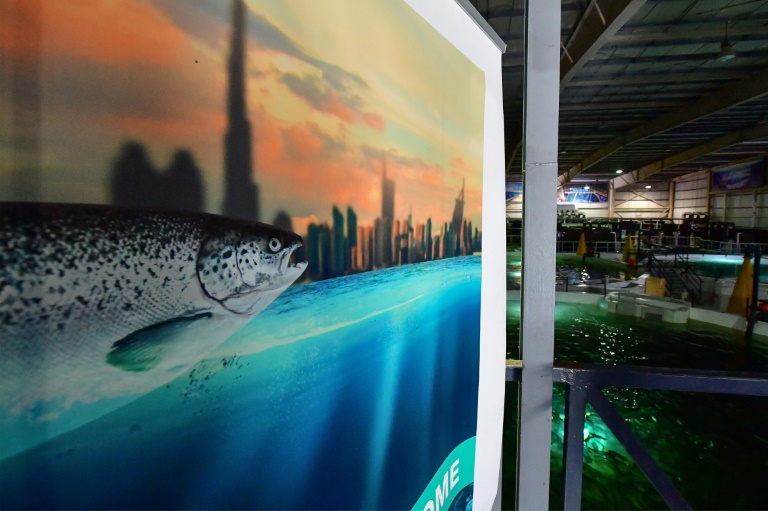 In the Dubai desert, Atlantic conditions are recreated to raise thousands of salmon in tanks. (Photo: AFP)

From a control room in the middle of Dubai's desert, Norway's sunrises and sunsets and the cool currents of the Atlantic are recreated for the benefit of thousands of salmon raised in tanks despite searing conditions outside.

Dubai is no stranger to ambitious projects, with a no-limits approach that has seen a palm-shaped island built off its coast, and a full-scale ski slope created inside a shopping mall.

But the farming of salmon in the desert is "something that no one could have imagined", said Bader bin Mubarak, chief executive of Fish Farm. "This is exactly what we're doing in Dubai."

Inside the facility, waters flow and temperatures fluctuate to create the most desirable conditions for the salmon living in four vast tanks.

"We provide for them a sunrise, sunset, tide, strong current or a simple river current -- and we have deep waters and shallow waters," Mubarak told AFP.

Even for a country known for its extravagant ventures, building Fish Farm, located along the southern border of the emirate, was a challenging endeavour.

Salmon usually live in cold waters such as those in and off Iceland, Norway, Scotland and Alaska -- which is why the farming of Atlantic salmon in a country where temperatures can reach up to 45C (113 degrees F) is a stretch to say the least.

"Creating the (right) environment for the salmon was the hardest thing we faced," Mubarak told AFP.

"But we came up with the idea of dark water that resembles deep water, a strong current like the ocean with the same salinity and temperature of the Atlantic."

Fish Farm bought some 40,000 fingerlings -- or juvenile fish -- from a hatchery in Scotland and thousands of more eggs from Iceland to raise in open tanks in Dubai's southern district of Jebel Ali.

Salmon are born in freshwater but live in salt water for much of their lives before returning to freshwater to spawn.

At their home in the United Arab Emirates, the tanks are filled with sea water that is cleaned and filtered.

It was established in 2013 with the support of Dubai's Crown Prince Sheikh Hamdan bin Mohammed bin Rashid Al-Maktoum, to farm salmon and other fish including Japanese amberjack, which is used to prepare sushi.

Mubarak said that because of the technical challenge, salmon-raising remains the "greatest production" of the farm, which supplies to Dubai and the rest of the United Arab Emirates, where the population includes millions of expatriates.

"The UAE imports around 92 percent of its fish from abroad, and the goal today is to be able to fulfil (that demand) for imports internally, so that we have food security," Mubarak said.

"In case there is an interruption, cyclone or floods, the UAE will be able to supply itself. This is the main objective."

Another goal is to be environmentally friendly and, in a move also motivated by the high cost of electricity, Fish Farm has plans to go solar-powered.

The ecological pros and cons of farming fish on land, compared to raising them in rivers and seas, are hotly debated, as is the alternative of harvesting wild fish.

"There are animal welfare concerns about keeping fish whose natural behaviour is to swim freely in seas and rivers in closed tanks," said Jessica Sinclair Taylor, from Feedback Global, a London-based environmental group.

"There are also concerns about the energy requirements and therefore carbon emissions."

But she said that on the plus side, land-based farming prevents water pollution in lakes or seas where salmon farms are sometimes sited, and where waste and run-off can damage marine ecosystems.

According to the Dubai Chamber of Commerce and Industry, the UAE imported 2.3 billion dirhams ($630 million, 570 million euros) of fish products, crustaceans and molluscs in 2017 and exported 280 million dirhams' worth.

Fish Farm, the UAE's only fish farm, hopes to meet at least 50 percent of the country's needs within two years, said Mubarak.

In April, Fish Farm began selling its products in supermarkets. Despite its decidedly unnatural origins, the salmon is marked "100 percent organic" because of the fish feed and the absence of antibiotics in a closed environment.

"It is (more expensive), but I also think about the quality -- I've tried different salmon before and this is less greasy and my family prefers this one," said Katja, a German residing in Dubai.

She said that UAE is "making really great efforts to produce not only fish but vegetables and other foods locally, and I think I should really support that".