CULTURE In the face of death, the party of a lifetime

In the face of death, the party of a lifetime 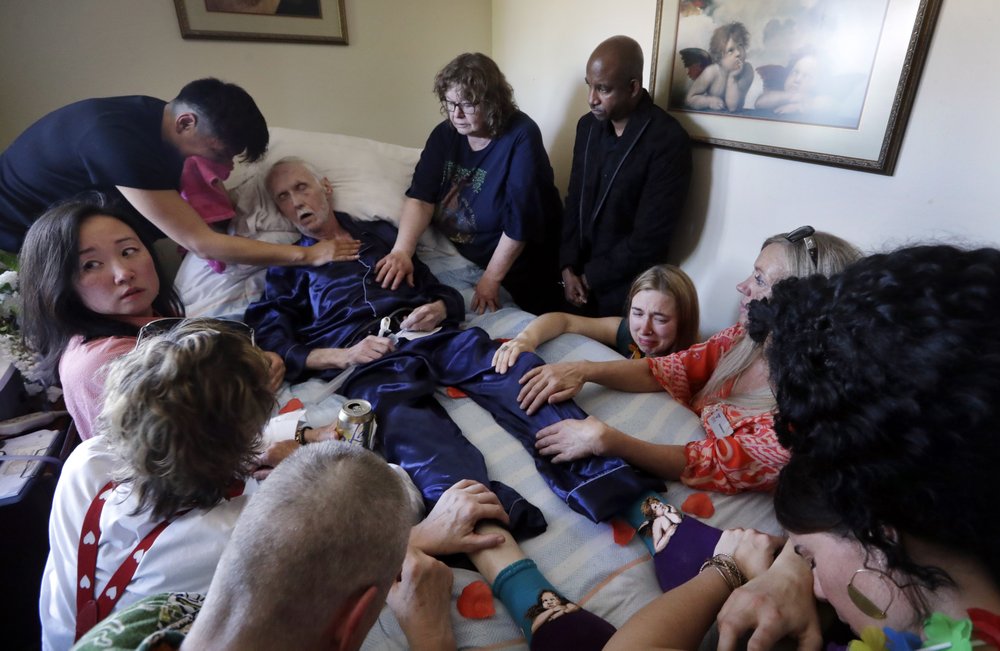 Robert Fuller lies unconscious after plunging prescribed drugs to end his life into his feeding tube as his husband, Reese Baxter, upper left, and friends lay hands on him, in Seattle on May 10, 2019. (Photo: AP)

The day he picked to die, Robert Fuller had the party of a lifetime.

In the morning, he dressed in a blue Hawaiian shirt and married his partner while sitting on a couch in their senior housing apartment. He then took the elevator down three floors to the building’s common room, decorated with balloons and flowers.

With an elaborately carved walking stick, he shuffled around to greet dozens of well-wishers and friends from across the decades, fellow church parishioners and social-work volunteers. The crowd spilled into a sunny courtyard on a beautiful spring day.

A gospel choir sang. A violinist and soprano performed “Ave Maria.” A Seattle poet recited an original piece imagining Fuller as a tree, with birds perched on his thoughts.

And when the time came, “Uncle Bob” banged his walking stick on the ceiling to command attention.

“I’ll be leaving you in a little over an hour,” he announced.

A sob burst. Fuller turned his head sympathetically toward its source.

Later that afternoon, Fuller plunged two syringes filled with a light brown liquid — a fatal drug combination mixed with Kahlua, his favorite alcohol — into a feeding tube in his abdomen. He was one of about 1,200 people who have used Washington’s Death with Dignity Act to end their lives in the decade since it became law.

As such laws grow more popular — they have taken or will take effect in Hawaii, New Jersey and Maine this year, making it nine states where “aid in dying” is allowed — more people who are suffering and terminally ill have the option of hastening their death. Those who do cite a variety of reasons — fear of losing their autonomy or dignity, becoming a burden to loved ones, becoming unable to enjoy life — but they are united in a desire to take control of their own ends.

The Associated Press documented one man’s story in the days surrounding his death, spending time with him and those around him. In an interview the day before he died, Fuller said he wanted to demonstrate for people around the country how such laws work.

For him, the decision to end his life at 75 was, if not easy, never in doubt.