CULTURE In US, a virus-era Ramadan presents obstacles, opportunities

In US, a virus-era Ramadan presents obstacles, opportunities 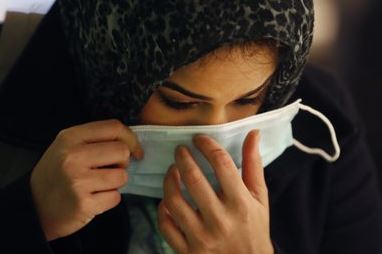 RUSH Hospital respiratory therapist Jumana Azam puts on a surgical mask after standing before a face temperature scanner as she reports for her early morning shift at the hospital in Chicago. (Photo: AP)

For Jamilah Shakir, the first week of Ramadan has been an adjustment. She typically spends every night of the month at the Atlanta Masjid of Al-Islam or another mosque nearby.

Now Ramadan has come, and mosques are closed to worshippers to prevent spread of the coronavirus. So Shakir and her family have had to improvise.

“It feels a little weird,” she says. “Not praying in community has been very, very different.”

For Muslims in the United States, there is no other time more centered around gathering in congregation than the holy month of Ramadan. In every corner of the country, believers attend community iftar meals to break the fast and then pack neatly into tight rows for nightly prayers at the mosque.

On weekends, especially, some may linger longer as they catch up, share in the pre-dawn suhoor meal and line up again for the fajr, dawn, prayers.

“The mosque plays a more significant role in being also a community center for American Muslims,” says Feryal Salem, associate professor of Arabic and Islamic studies at American Islamic College. “Because Muslims are a minority, they have to go the extra mile to create that unique communal experience that’s unique to Ramadan.”

But this year, Ramadan falls during a global pandemic. In the US, with the world’s highest COVID-19 death toll, that means being forced to mark the month in different, more virtual and sometimes solitary ways.

As they re-imagine some of the spiritual and social rituals, many are relying on a mix of at-home worship and a myriad of online religious programming.

Virtual iftar options have sprung up so the devout don’t have to break their fast alone. But not all moments can be recreated on a screen. There will be dishes not shared, prayers not lifted together, hugs not given.

Hugs and congregational prayers are the two things Shakir misses the most.

But she looks for the blessings. She lives in a close-knit community in South Atlanta with dozens of other Muslim families. She still plans to catch her neighbors — at a distance — on the days she and her sons might be grilling meat for iftar outside.

“Although it’s very different from how we normally gather, I’m still so grateful that Allah put us in this Islamic community during this time.”

Around the country, Muslims are adapting to the unprecedented challenges.