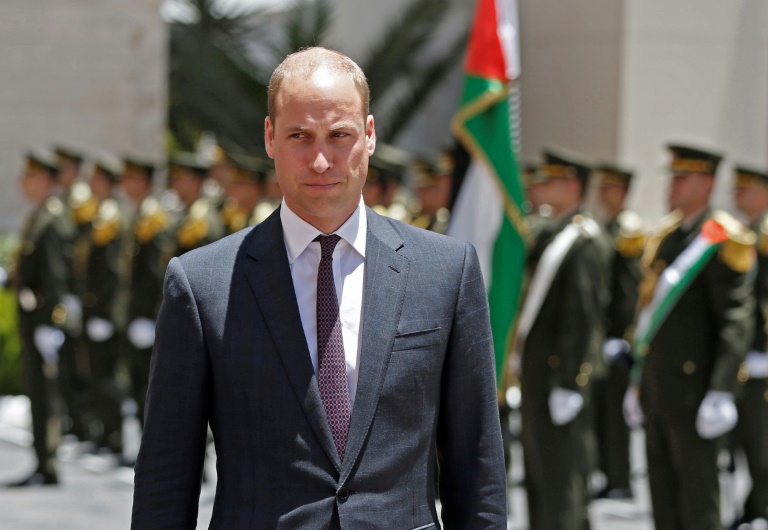 Britain's Prince William found himself on diplomatic thin ice during a visit to the Israeli-occupied West Bank on Wednesday when he called the Palestinian territories a "country".

Meeting with Palestinian president Mahmud Abbas in Ramallah, the prince appeared to fall foul of the complex language surrounding the Middle East conflict.

"Thank you for welcoming me, and I am very glad that our two countries work so closely together and have had success stories with education and relief work in the past," he told Abbas, speaking without notes.

Western countries typically refrain from referring to the Palestinian territories as a country or state, instead supporting the Palestinian demand for sovereignty in the future -- the so-called two-state solution.

And while Palestine has observer status at the United Nations, it is not a fully recognised member state.

The Likud party of Israeli Prime Minister Benjamin Netanyahu, who the prince met in Jerusalem on Tuesday, rejects Palestinian statehood and supports Jewish settlement in the Israeli-occupied West Bank, where Abbas's Palestinian Authority is based.

Israel's coalition government, considered the most right-wing in the country's history, includes ministers who have voiced support for annexing the West Bank.

In a statement, the British foreign office did not comment directly on the Prince's words but said "the UK government supports the creation of a sovereign, independent and viable Palestinian state -- living in peace and security, side by side with Israel."

"The UK will recognise a Palestinian state at a time when it can best help to bring about peace."

Later in Jerusalem the prince gave a speech in which he called for peace and told the Palestinians they had "not been forgotten".

William said during the visit to Jalazone refugee camp near Ramallah he had seen "the tremendous hardships faced by refugees and I can only imagine the difficulties of life lived under these conditions, the limited resources and the lack of opportunity."

"My message tonight is that you have not been forgotten."

The prince said he had been "struck by how many people in the region want a just and lasting peace. This is only too evident among the young people I have met who long for a new chapter to be written in the history of this region."

While in Ramallah the Prince met with refugees and attended a cultural event in which he watched traditional Palestinian dancing.

He drank coffee and sampled some traditional Palestinian food before watching and briefly joining in football with Palestinian children.

Wearing a light jacket, jeans and blue shirt, he took four shots against a young goalkeeper, who saved the first three but let in the fourth, an AFP correspondent said.

The mayor of Ramallah Mousa Hadeel told AFP he wanted to help the prince learn about the history of the Palestinians.

"Our message is also one of love to Prince William and to the whole world and that this country needs peace so that this people can live," he said.

The trip, the first by a senior British royal to both Israel and the Palestinian territories, comes at a particularly sensitive time after US President Donald Trump recognised Jerusalem as capital of Israel.

The US move outraged Palestinians and sparked deadly clashes on the border with Gaza.

On Thursday, the prince is to complete his stay by visiting historical and religious sites in east Jerusalem.