CULTURE In Zimbabwe, ‘you win coronavirus or you win starvation’

In Zimbabwe, ‘you win coronavirus or you win starvation’ 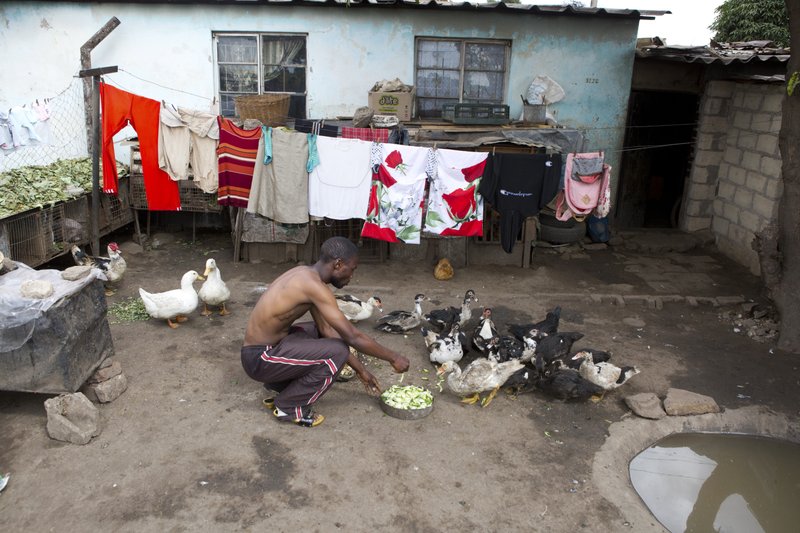 “We are already ruined. What more harm can coronavirus do?” Irene Kampira asked as she sorted secondhand clothes at a bustling market in a poor suburb of Zimbabwe’s capital, Harare.

People in one of the world’s most devastated nations are choosing daily survival over measures to protect themselves from a virus that “might not even kill us,” Kampira said.

Even as the country enters a “total lockdown” over the virus on Monday, social distancing is pushed aside in the struggle to obtain food, cash, cheap public transport, even clean water. The World Health Organization’s recommended virus precautions seem far-fetched for many of Zimbabwe’s 15 million people.

“It’s better to get coronavirus while looking for money than to sit at home and die from hunger,” Kampira said, to loud approval from other vendors.

The southern African nation has few cases but its health system is in tatters, and the virus could quickly overwhelm it. Hundreds of public hospital doctors and nurses have gone on strike over the lack of protective equipment. Many Zimbabweans are already vulnerable from hunger or underlying health issues like HIV, which is present in 12% of the population.

Last year a United Nations expert called the number of hungry people in Zimbabwe “shocking” for a country not in conflict. The World Food Program has said more than 7 million people, or half the country, needs aid.

Harare, like most cities and towns across Zimbabwe, has an acute water shortage and residents at times go for months, even years, without a working tap. Many must crowd communal wells, fearing the close contact will speed the coronavirus’ spread.

“If the taps were working we wouldn’t be here, swarming the well like bees on a beehive or flies on sewage. We are busy exchanging coronavirus here coughing and spitting saliva at each other,” said 18-year old Annastancia Jack while waiting her turn.

The government has closed borders and banned gatherings of more than 50 people while encouraging people to stay at home.

But the majority of Zimbabweans need to go out daily to put food on the table. With inflation over 500% most industries have closed, leaving many people to become street vendors. Zimbabwe has the world’s second-largest informal economy after Bolivia, according to the International Monetary Fund.

Police in recent days have tried to clear vendors from the streets, in vain. As in other African countries where many people rely on informal markets, a lockdown could mean immediate food shortages.

Once-prosperous Zimbabwe was full of renewed promise with the forced resignation in late 2017 of longtime leader Robert Mugabe. But President Emmerson Mnangagwa has struggled to fulfil promises of prosperity since taking power. He blames the country’s crisis in part on sanctions imposed on certain individuals, including himself, by the U.S. over rights abuses.

Daily necessities in Zimbabwe make social distancing an elusive ideal. In downtown Harare, hordes of people congregate at banks for cash, which is in short supply. Others pack public transport.

“We are the only ones practicing social distancing, we sit in our cars all day,” said Blessing Hwiribisha, a motorist in a fuel line snaking for more than a kilometer in the poor suburb of Kuwadzana.

“Look at them,” he said. He pointed at a supermarket across the road where hundreds of people shoved to buy maize meal, which has become scarce due to a devastating drought and lack of foreign currency to import more.

“What is happening in Zimbabwe is very scary. It’s like we are playing cards. Its either you win coronavirus or you win starvation,” said Tinashe Moyo at the supermarket. “I am very scared.”

Few health workers are available as doctors and nurses strike.

“There is a difference between being heroic and being suicidal,” said Tawanda Zvakada, president of the Zimbabwe Hospital Doctors Association.

Health workers described a lack of disinfectants, sanitizers and even water at hospitals.

But frightened health workers cited the death of a prominent broadcaster at an ill-equipped isolation center specifically reserved for COVID-19 cases.

“They didn’t have a ventilator to help him,” Zvakada said. “The inability of our system to manage one patient is worrying. What about when there are 50 patients?”

Zimbabwe has has less than 20 ventilators to help people in severe respiratory distress, he said. He said the country needs hundreds to adequately deal with the virus.

“We see a situation where Zimbabwe can become a graveyard if we are not careful,” said Itai Rusike, director of the Harare-based Community Working Group on Health.