Cheteshwar Pujara scored his third century of the tour and India took a big step towards winning a series in Australia for the first time as it reached 303-4 at the end of day one of the fourth and final test against Australia at the Sydney Cricket Ground. 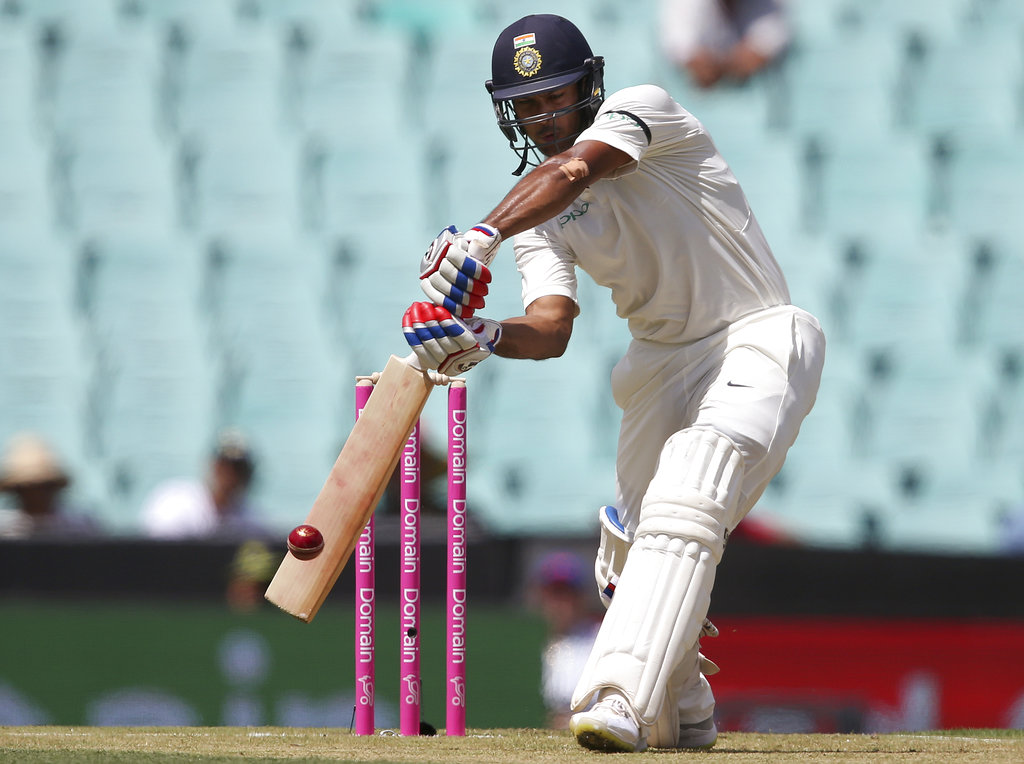 Pujara, with 458 runs at an average of 76.3, has been the standout batsman of the series and he proved immovable once again, reaching his 18th century in 68 tests in a near flawless batting display which nullified Australia's attack on Thursday.

At stumps, Pujara was unbeaten on 130 off 250 balls with 16 boundaries with Hanuma Vihari 39 not out, sharing a 75-run partnership.

Pujara was ably supported by Mayank Agarwal (77), who scored his second 50 in as many matches as part of a 112-run partnership, as India profited from winning the toss and batting on a green-tinged SCG pitch. 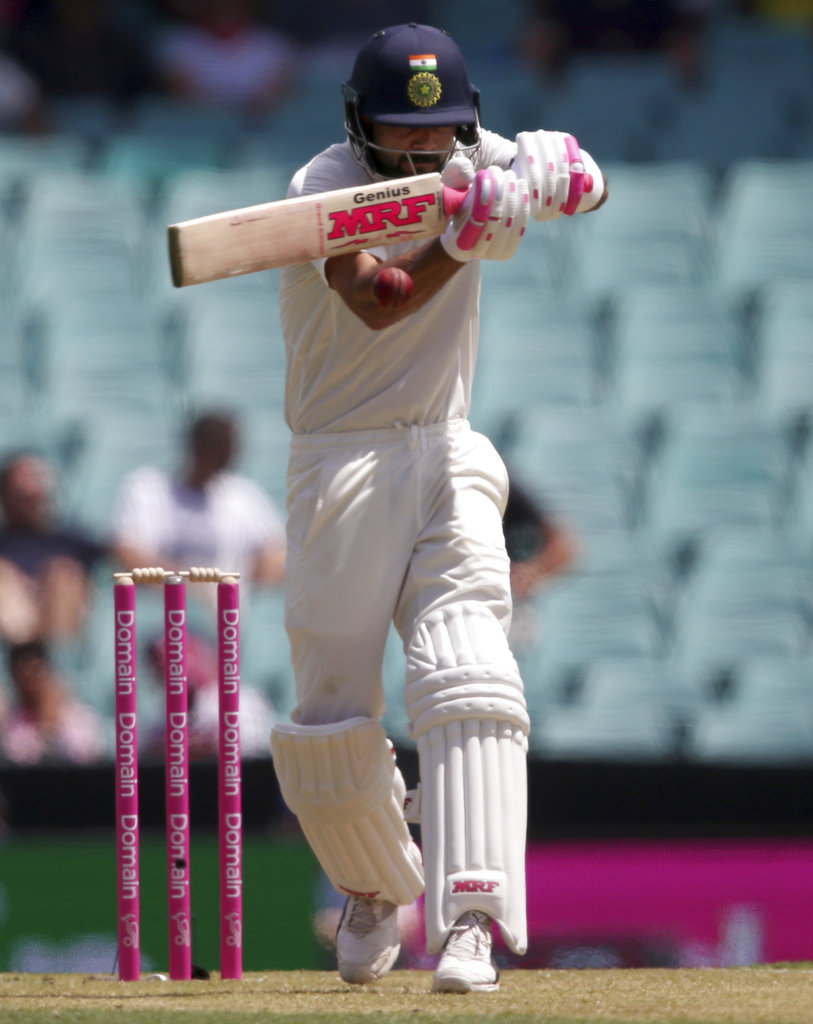 India's Virhat Kohli pulls the ball off the bowling from Australia's Pat Cummins during their cricket test match in Sydney, Thursday, Jan. 3, 2019.

Josh Hazlewood led the host's attack with two wickets, including the prized wicket of India captain Virat Kohli, who gloved a short ball through to Tim Paine when on 23.

Hazlewood finished the day with 2-51, after also claiming Lokesh Rahul (9), caught in the slips in his first over of the day.

Agarwal continued his impressive introduction to test cricket with another half century. Watchful in the morning session, Agarwal opened up after lunch and raced to 77, surpassing his previous best of 76 on debut in Melbourne, before trying one big shot too many off Lyon (1-88) to hole out to Mitchell Starc at long on. Agarwal's 77 came off 112 balls with seven boundaries and two sixes. 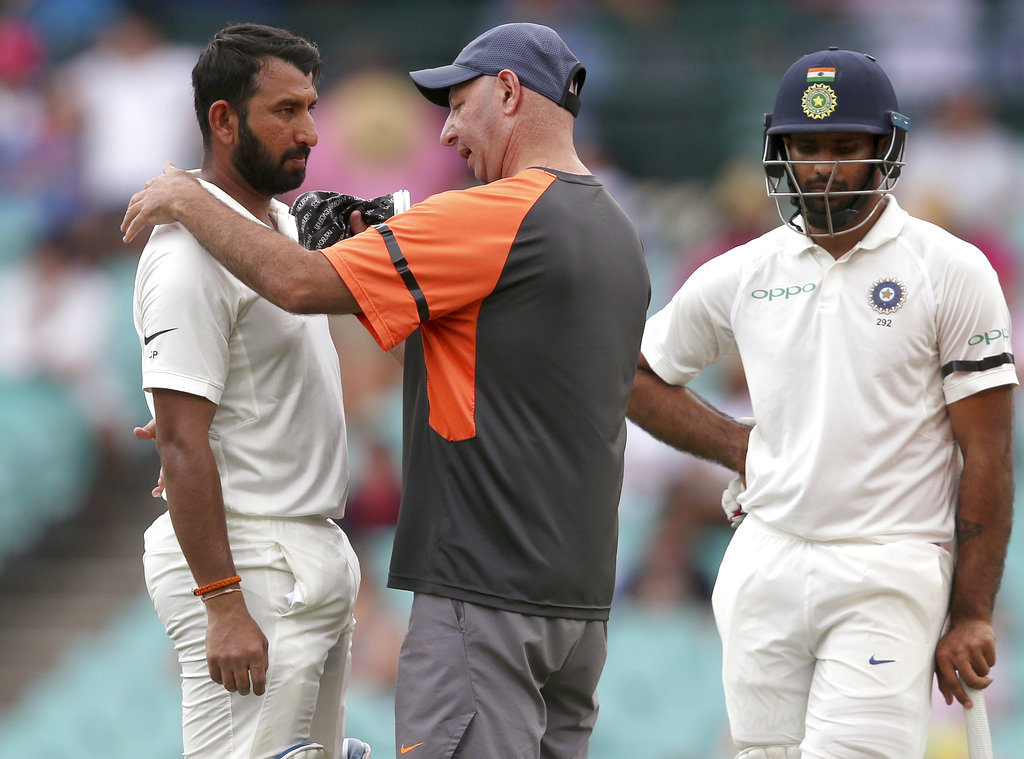 A trainer checks on the condition of India's Cheteshwar Pujara, left, as teammate India's Hanuma Vihari, right, watches after Pujara was hit in the shoulder by an Australian delivery during their cricket test match in Sydney, Thursday, Jan. 3, 2019.

"I am quite disappointed for missing out on a big score," Agarwal said. "With that said it's a learning curve."

Agarwal's departure brought Kohli to the crease and the India captain was welcomed by boos by many in the 33,678-strong SCG crowd. The crowd's reception didn't appear to faze Kohli has he punched a blistering cover drive for four off Hazlewood to get off the mark.

Pujara and Kohli raised an unbroken 50-run partnership by tea in what was appearing an ominous sign for Australia, but Hazlewood struck with the fifth ball after the break, catching Kohli on the gloves as the ball passed down the leg side and was caught by a diving Paine. 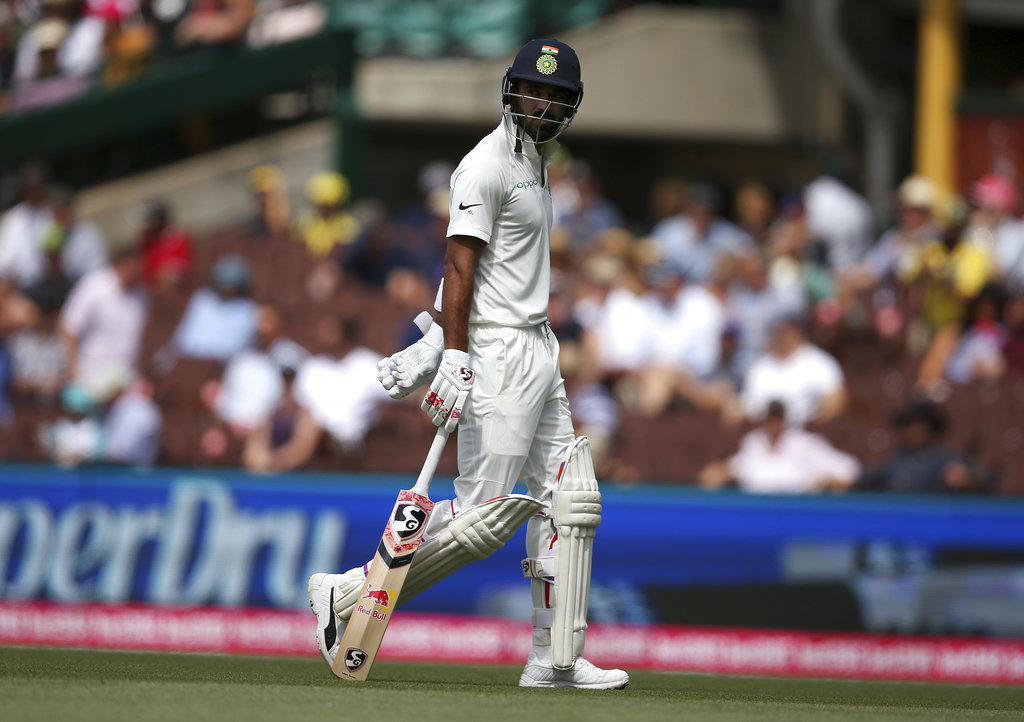 India's K.L. Rahul walks off after he was caught in the slips for 9 runs against Australia during their cricket test match in Sydney, Thursday, Jan. 3, 2019.

Ajinkya Rahane then joined Pujara and looked comfortable in reaching 18 before he received a sharp, rising delivery from Starc (1-75) which he edged through for Paine's third catch of the innings to have India at 228-4.

Shortly after, Pujara reached his century off 199 balls with a boundary off Starc to fine leg. He raised both arms in celebration towards his Indian teammates in the Members Pavilion before embracing batting-partner Vihari.

"The way he grinds the bowlers, he's got a pattern to it," Agarwal said. "He understands his strengths and sticks to that. He knows he is very tight with his defense and looks to do that and wait for the right ball to come." 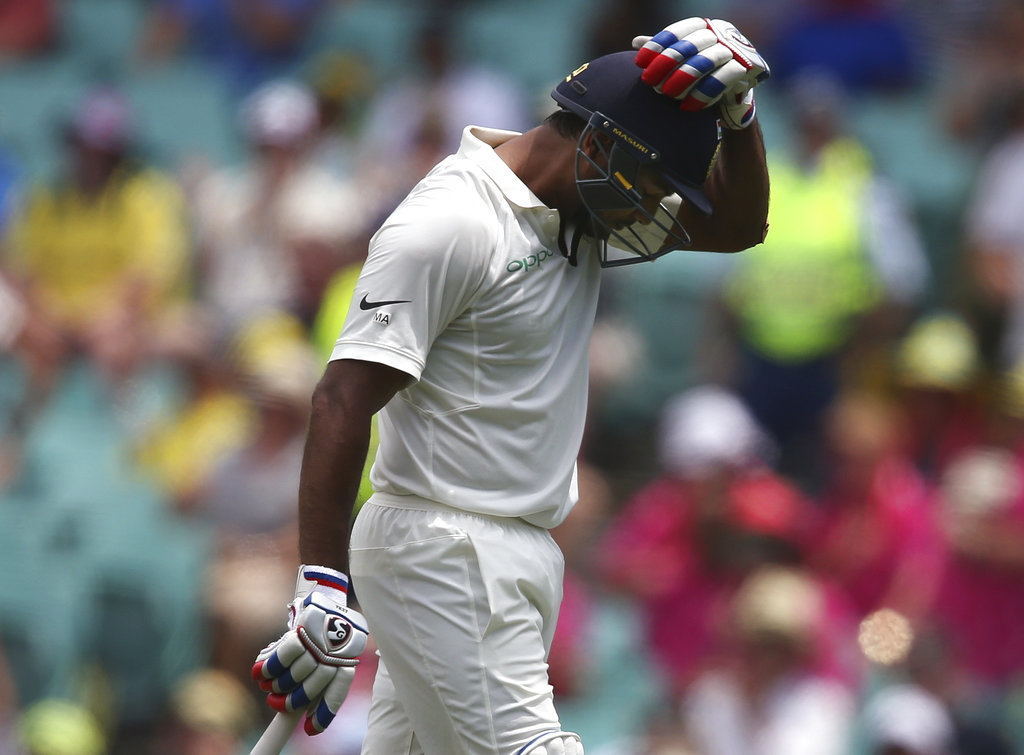 India's Mayank Agarwal holds his head after he was caught out for 77 runs against Australia during their cricket test match in Sydney, Thursday, Jan. 3, 2019.

It was Pujara's third century of this series after he scored 123 in the first test at Adelaide, followed by 106 last week in Melbourne. It is the first time the 30-year-old has scored three hundreds in a series.

"He was very classy," Australia allrounder Marnus Labuschagne said of Pujara. "His time, his patience around the crease and just the way he batted was very good."

Both teams made two changes from the third test with India bringing in Rahul for Rohit Sharma, who is absent after the birth of his first child, and spinner Kuldeep Yadav for seamer Ishant Sharma.

India leads the four-test series 2-1 after wins in the first test at Adelaide by 31 runs and last week's Boxing Day test to retain the Border-Gavaskar trophy. Australia won the second test in Perth by 146 runs.