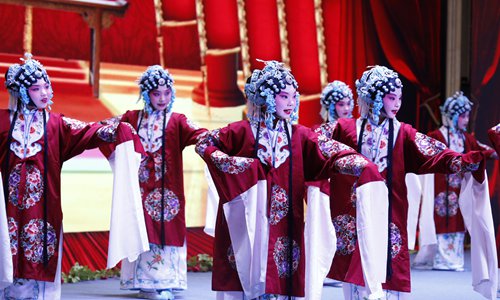 Colors of India, a cultural event, co-organized by the Indian Embassy and the Beijing Service Bureau for Diplomatic Missions, took place at the Indian Embassy in Beijing on January 4, during which Indian and Chinese cultural singing and dancing performances were presented.

Acquino Vimal, charge d' affaires of the Indian Embassy delivered opening remarks, in which he expressed his wish for deepening understanding between the people of China and India through cultural exchanges. "India and China are two ancient civilizations with long history of cultural interaction stretching over millennia.

Through Colors of India, we are presenting a glimpse of the rich cultural heritage of India through a panorama of dance, music as well as a photo exhibition," Vimal said. "Introducing various aspects of Indian culture to the people of China is a significant part of our outreach activities. " Vimal also noted that Swami Vivekananda Culture Centre and the Indian Embassy will provide regular classes on Indian dance, music and yoga in Beijing. The director-general of the Beijing Service Bureau for Diplomatic Missions Yuan Weimin also attended the event.