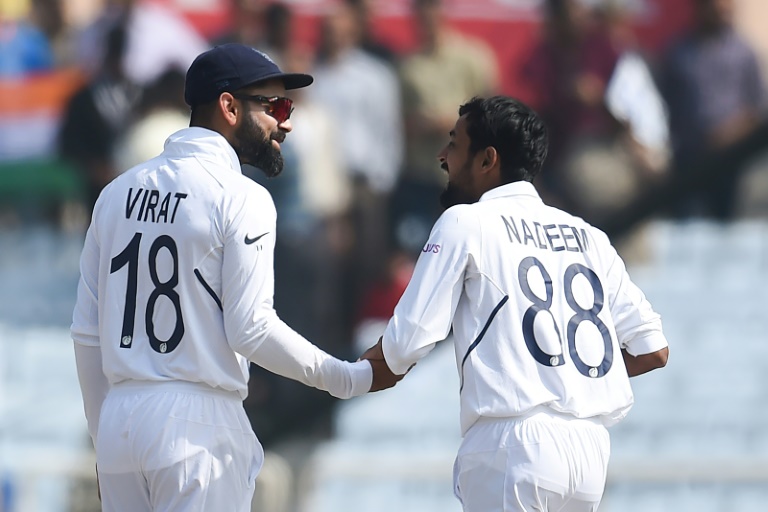 South Africa has suffered one of their worst Test series in decades after India's 3-0 clean sweep. (Photo: AFP)

Shahbaz Nadeem took the final two wickets in straight balls as India thrashed South Africa by an innings and 202 runs in the third Test on Tuesday to complete a 3-0 series rout.

The day's play lasted just 12 balls in a triumph emphatically ramming home India's feat in beating Australia's record of 10 straight home series wins, and consolidating their place at the top of the World Test Championship.

For South Africa, who lost two of the three matches by more than an innings, it was one of their worst series in decades.

"It's been a brilliant series for us," said India captain Virat Kohli as he hailed the performance of his batsmen and bowlers who made 497 for nine declared in their first innings.

Kohli made South Africa follow on after they were bowled out for 162 in their first attempt in Ranchi.

Resuming on 132-8 in the second innings, Nadeem got substitute Theunis de Bruyn caught behind for 30 and then Lungi Ngidi for nought to dismiss the tourists for 133 on the fourth day.

"To be the best side in the world, you need to be multi-dimensional. All facets of your team have to fire," said Kohli.

The series saw Indian batsmen Mayank Agarwal (215), Kohli (254 not out) and Rohit Sharma (212) all hit double tons against South Africa.

After big wins in the first two tests in Visakhapatnam and Pune, fast bowlers Mohammed Shami and Umesh Yadav again battered South Africa in Ranchi, this time taking 10 wickets between them.

"The catching has been brilliant as well. It's great to see when you operate in such a way," said Kohli.

"We believe we can win anywhere in the world. England, Australia, South Africa -- good things are going to follow," he vowed.

He said the team had shown "good signs" at the start of the first Test, "but we went the other way and kept making more mistakes as the series went on.

"You got to give credit to the Indian team. This is a really tough Indian team under Virat," he added.

"Be it in the batting, bowling or even fielding, we were dominated across the series."

"Our seamers were good for 30-40 minutes but theirs were able to do that throughout the day."

"It has been a really tough series for us but we need to ensure that when we tour again, we are better equipped. This is the toughest place to tour, the statistics say that."

De Bruyn came in to the South African XI in place of Dean Elgar, who was hit on the helmet and concussed by a short paced Umesh Yadav delivery on Monday.

The left-hander had to retire hurt and is now under observation.

Anrich Nortje received a hit on the arm on the final ball of the match after Ngidi's shot hit him and then went to Nadeem for a return catch.

India are scheduled to host Bangladesh for two Tests and three Twenty20 internationals starting November 3. But the tour is under threat as the Bangladesh players have gone on strike over payments.