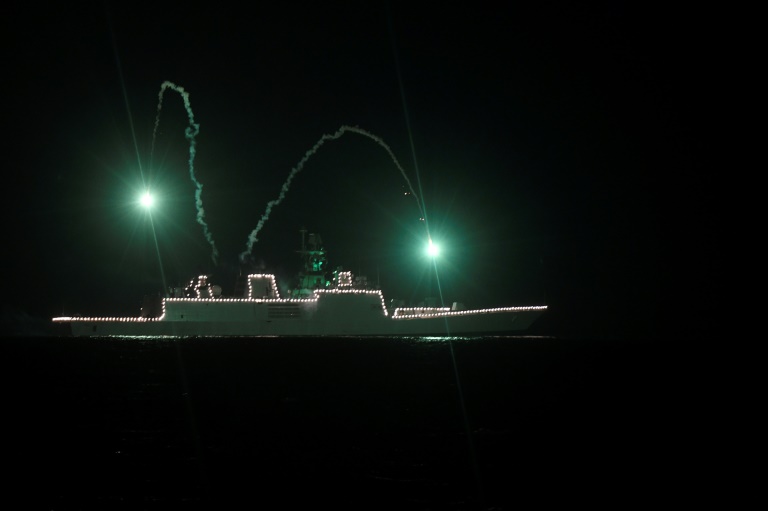 An Indian navy ship anchored off the coast of Marina Beach, Chennai, is illuminated in tribute to people fighting the novel coronavirus.  (Photo: AFP)

In one of the first of several gestures on Sunday, petals fell on to the upturned faces of medical personnel clad in protective gear while an army band played patriotic tunes including "Jai Ho" (May victory prevail) from the popular "Slumdog Millionaire" film.

In several states and territories across the vast nation of 1.3 billion people, fighter jets and transport aircraft in formations took part in low-flying aerial salutes to thank the country's so-called "corona warriors".

"The entire nation stands united in these challenging times," Defence Minister Rajnath Singh tweeted Sunday. He praised the "commendable work" of the "frontline warriors", including police who have been enforcing the nationwide virus lockdown in place since late March.

The navy lit up its ships off the sub-continent's shores when night fell, as part of the tributes.

The performances were the third public show of gratitude to health and other frontline workers, after Indians took part in nationwide clapping and lamp lighting efforts led by Prime Minister Narendra Modi on previous Sundays.

The lockdown was extended for another two weeks by the government on Friday, although some restrictions were lifted in regions that have lower numbers of virus cases.