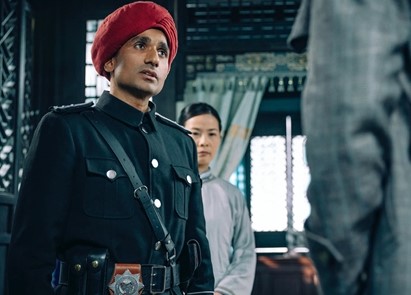 Promotional material for My Roommate Is a Detective. (Photo: GT)

Editor's Note:
Having lived in China for 15 years, Indian ex-pat Dev Raturi never expected he would spend two months in lockdown due to an epidemic. Now, his concern for his closed Indian restaurants in Xi'an, Northwest China's Shaanxi Province has eased due to the local government's implementation of rental control policies. With the epidemic under control in China, his restaurants have finally reopened and his other career as an actor has resumed.

For the past 15 years, I have been an Indian expat living in China, working in the country's entertainment and food industries.

Like most people throughout the country, my family and I were preparing for Chinese New Year when we heard that a pneumonia-like disease was reported in Wuhan. At the time, I never thought this disease would turn into such a severe pandemic, but once the Chinese government made the decision to lock down the entire country, we understood the severity of the situation.

The entire country remained under lockdown for around two months as everything was restricted, including businesses, restaurants, manufacturing and transportation, to prevent the spread of COVID-19. Fortunately, the prudent and proactive policies of the Chinese government curbed the spread of the virus in the country and have allowed life to slowly return to normal.

I would like to sincerely thank China for its incredible job in bringing the country out of this pandemic by applying appropriate scientific, social and legal measures. I was in Xi'an with my wife and kids when the lockdown first started. My family back in India was worried and wanted me to return to India. However, after thinking about it, I decided to stay in China and fight this situation along with my family and employees as I had full confidence in the government of China.

China's strict measures set an example for the whole world to realize the importance of implementing lockdowns and social distancing. Today the entire world has learned this lesson and many have implemented the model in their countries. Meanwhile, doctors in China and across the world are working hard to find a vaccine to prevent COVID-19 and I am hopeful that very soon we will see it become a reality.

During the lockdown period, we received overwhelming support from the Chinese people and the government. This support continues as life has returned to normal. Now our restaurants have reopened and I have also resumed shooting for an upcoming movie.

My film career didn't start in China. I actually tried to enter Bollywood way back in 1998, but I had to give up as I went aghast while facing the camera and couldn't act at all. I later came to China in 2005 and during my long journey working in the country's hospitality industry, I also got the opportunity to work in various Chinese movies and TV series. Fortunately, my confidence in front of the camera has increased as I worked hard to sharpen my acting skills. So far, I have worked on five movies and two TV series playing various roles such as a gangster, doctor, astronaut, and police chief.

I started shooting for the TV series My Roommate Is a Detective in late 2019 with well-known star Hu Yitian and Zhang Yunlong. The show released in March, right during the height of the Covid-19 lockdown, which was an ideal time for the show since everyone was confined to their homes. I am delighted that people really loved my character, a detective named Salim, and have been overwhelmed by the support shown by thousands of fans on my Sina Weibo every day. It is currently the most popular TV series in China and is on top of the target rating point rankings.

Now that the lockdown has ended, it has been a relief to resume my pending projects.

I am currently in Hengdian city, a major center for filming in China, where I am playing an intense and notorious pirate leader in an upcoming movie based on the true-life story of the gallant General Langli.

I arrived in the city last week and during my travel here I experienced the proactive measures of the Chinese government to eliminate COVID-19 at every step of the way. I took a train from Xi'an, where the identity of each traveler was properly scrutinized to ensure that no one had come into contact with COVID-19.

After I arrived at my hotel in Hengdian, the police asked us to scan a QR code and enter our details. They checked my temperature before I entered the hotel and the very next morning all the members of the film crew went to a hospital for a checkup. Although there were hundreds of people lined up for tests, arrangements were so streamlined that it took us only 30 minutes.

Leaving the hospital, we were told not to go anywhere until the results came back.

The best thing I like about China is that everyone follows the rules and regulations very diligently and fully cooperates with government guidelines unlike many other countries that are still struggling with the outbreak. Our entire movie crew has now received our results and we have resumed shooting.

Hengdian is a beautiful city and I see many films being shot here at various locations that attract lots of tourists. I am looking forward to resuming my other projects soon.