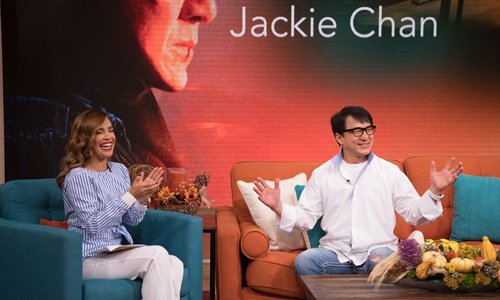 Patani, who once starred alongside Chan in the Chinese adventure comedy film Kung Fu Yoga, shared a photo of herself and Chan on Instagram on Tuesday with a post that read: "Happiest b'day taguuu. This was the first time I met you, I remember being so nervous but it turned out to be the best day of my life, getting an opportunity to work with my 'superhero' is the best thing that has ever happened to me…"

According to reports, talented Indian actor and director Aamir Khan also expressed his respect and appreciation of Chan, saying Chan is his favorite star and that he has watched all of the action star's films.

"I really like Jackie Chan's creativity because the traditional Chinese kung fu he performs can be easily understood by foreign audiences. He is an excellent international actor but he does not forget he is Chinese as his films are often full of Chinese elements," Shah Nishith Avinash, an Indian fan of Chan who runs the India China Academy for teaching Chinese in Bombay, told the Global Times on Wednesday.

He added that kung fu was the reason he wanted to learn Chinese and that martial art films were what caused him to "fall in love with China."

"If you casually ask an Indian which Chinese star he or she likes, 99 percent of them will say Jackie Chan," Shah said.

He explained that many of Chan's films, including Shanghai Knights, Shanghai Noon, Rush Hour, Drunken Master and Police Story, are broadcast on Indian TV channels, his favorite being Shanghai Noon.

Shah said that Chan often feels like a Chinese cultural ambassador. People of all ages in India like to watch his films not to learn Chinese culture but just because they enjoy his acting and his sense of humor.

"Indian people care about the 'entertainment factor' when watching movies, and Jackie Chan performs Chinese martial arts in a humorous way," he said, noting that some of his students at the academy wanted to learn Chinese because Chan was their idol.

"He is modest and respects other countries' cultures, which is something many of us should learn to do."