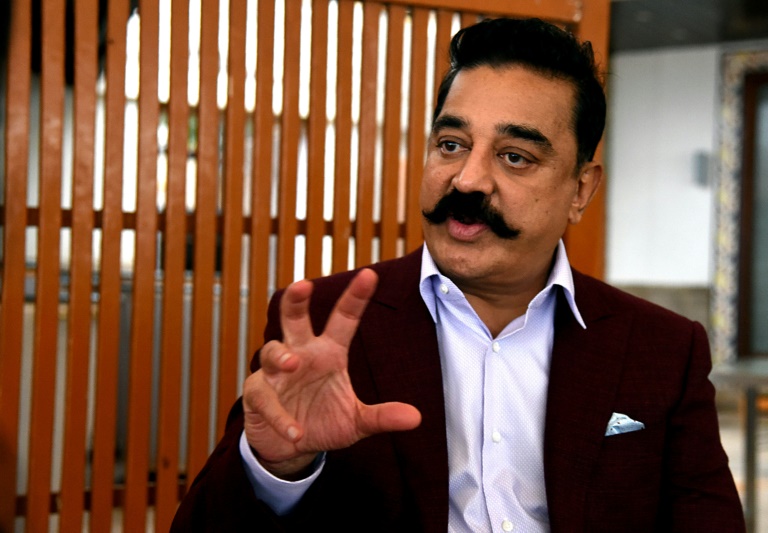 Indian movie star Kamal Haasan, whose latest film releases Friday, enjoys causing a stir as an actor and now he is looking to shake up Indian politics as well.

Haasan is one of the biggest names in Indian cinema and has appeared in more than 200 films since making his debut aged six over half a century ago.

The 63-year-old, who has endured battles with censorship, recently formed his own political party and plans to fight for artistic freedoms that he says are being curbed.

"It's happening all around the country and should be challenged. Every artist should assert his or her right to speak," Haasan, from the southern state of Tamil Nadu, told AFP in an interview.

The multiple award-winning screen icon is the latest in a long line of Indian actors hoping to transform their popularity at the box office into votes at the ballot box.

Haasan launched Makkal Needhi Maiam in February, a political party based in Tamil Nadu that translates to "People's Justice Centre" in the local language.

It will contest polls for the first time in India's next general election, likely to be held in spring 2019 when Prime Minister Narendra Modi will seek a second term.

Haasan, whose films have had a political hue since the 1980s, said his party's priorities will be to "defend freedom of speech, and maintain and safeguard the diversity and multi-religious quality of the nation".

"My decision (to get into politics) was accelerated by what is going on in the country but especially in my state," the actor said during the interview in Mumbai.

"I wanted to challenge the status quo. And I am not inventing this decorum of centrism. We had it, and I want to regain it."

Haasan, who also produces, directs and sings in many of his movies has appeared in films across several Indian languages -- Tamil, Telugu, Malayalam and Hindi -- making him a truly nationwide star.

He has picked up a number of awards throughout a glittering career including the Padma Bhushan, India's third-highest civilian honour, and was made a Chevalier of France's Ordre des Arts et des Lettres.

Some of his most notable movies include "Vikram", "Mahanadi" (The Great River), and "Nayakan" (The Hero).

His latest movie, the action spy thriller "Vishwaroop 2" (titled "Vishwaroopam 2" in Tamil and meaning "The Magnificent Incarnation 2"), hits screens across India on Friday.

It is the sequel to 2013's "Vishwaroopam", which was controversially banned by the Tamil Nadu government despite being cleared for release by India's censor board.

The administration of the late J. Jayalalithaa, herself a former prominent actor, blocked the movie's release on law and order grounds after Muslim groups claimed it could disturb communal harmony.

Only after the Chennai-based Haasan threatened to leave the state and agreed to mute five scenes was the film released, two weeks late.

It cost the actor, who also wrote and directed the movie, around 600 million rupees ($8.74 million based on today's exchange rate).

Haasan has been no stranger to controversy throughout his acting career.

"Hey Ram" caused an outcry in 2000 for supposedly depicting Mahatma Gandhi in a poor light while 1992's "Thevar Magan" (Son of Thevar) was accused of portraying an Indian community as violent.

His venture into politics came after another Indian cinema icon, Rajinikanth, also floated the idea of forming his own party.

Both are looking to follow in the footsteps of Jayalalithaa and her mentor M.G. Ramachandran, who was also a famous actor before becoming Tamil Nadu chief minister.

Haasan said he has two acting projects to finish before turning his focus entirely to politics.

"I have to continue fighting the battle," he declared. "I will use all platforms to further the image of the party."