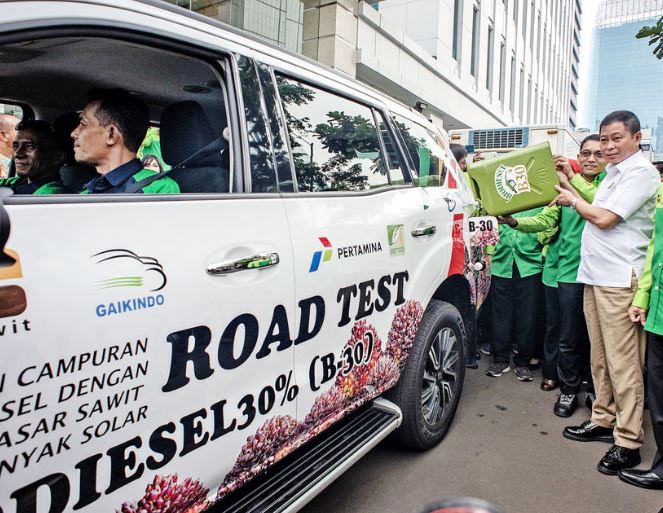 JAKARTA, Dec. 23 (Xinhua) -- The Indonesian government on Monday launched bio-diesel fuel with a higher bio-content of 30 percent (B30) in a bid to help preserve the environment and improve the current account gap.

Indonesian President Joko Widodo said that the usage of the clean energy would reduce the country's reliance on fossil fuel and drift down the release of carbon emission.

"The development of the renewable energy proves our commitment to preserving the earth," said the president, after launching the B30 fuel here.

The import cost of fossil fuel has primarily contributed to the deficit on the country's trade balance.

The size of the current account gap partly plays a crucial role in maintaining the rupiah stability.

The production of the B30 fuel leads the country to consume more its crude palm oil, and reduce dependency on the global market, Widodo added.

In March, the European Union (EU) decided to phase out palm oil from raw materials used in bio-fuel, saying that the cultivation of the commodity has resulted in excessive deforestation.

However, Indonesia denied the EU's decision, stressing that the former has implemented a sustainable and eco-friendly way of cultivation, and thus the country filed a complaint to the WTO.

"Why should we rely on other countries if we can consume it (crude palm oil) in the country. This is a clean energy. If you do not want to buy it, I can consume it myself... Our bargaining position is stronger," Widodo asserted.

The government is planning to carry out road tests for bio-diesel fuel with higher bio content of 40 percent next year and 50 percent at the beginning of 2021, the president said in a statement issued by the cabinet secretariat.

To support the plan, Indonesia which is the world's largest producer of crude palm oil, will double the productivity of the palm oil plantations to 6.9 ton per hectare per year within the next ten years, partly by carrying out a rejuvenation program, Chairman of the Indonesian Palm Oil Growers Joko Supriyono has said.