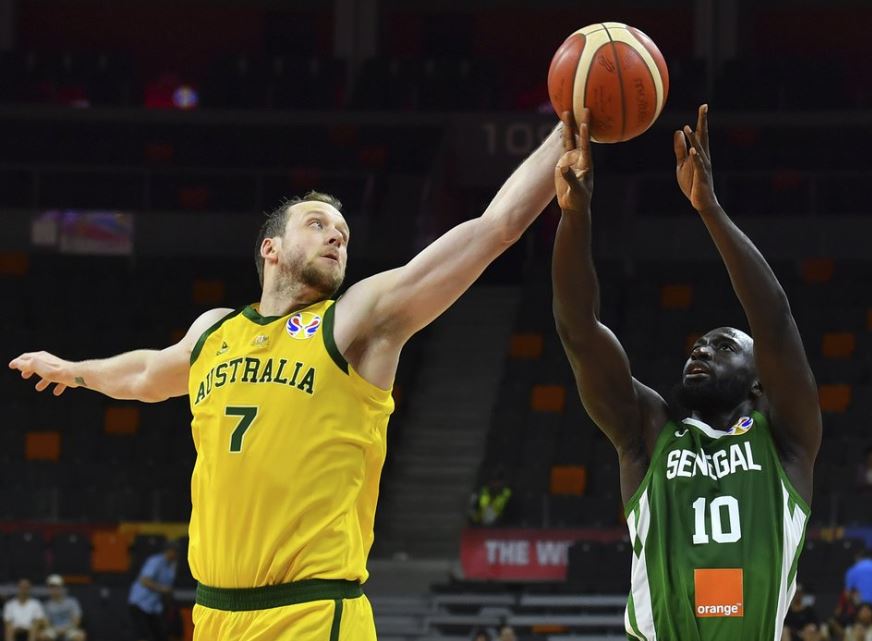 Australia showed it can do damage by ending the Americans’ 78-game winning streak in a warm-up game just over a week ago.

On Tuesday in Group H, the Boomers defeated Senegal 81-68 in Dongguan in the far south of China to improve to 2-0 and qualify for the second round. Senegal is 0-2.

Patty Mills of the San Antonio Spurs led Australia with 22 points, but Joe Ingles of the Utah Jazz was the game’s top player with 17 points, 10 rebounds and nine assists.

Ingles was one assist away from a triple-double, which a FIBA official told him would have been a first in the World Cup.

“I didn’t know that, but even though I do know it now it still doesn’t bother me,” he said. “The only goal today was to win the game and that’s all our focus.”

It was not that easy despite Ingles’ big numbers.

“That could be the tallest overall team that we’ve played against in my time as coach,” Australia coach Andrej Lemanis said.

Added Ingles: “That first half, they kind of had us on our back foot a little bit. We had to come in at halftime and address a few things.”

At Dongguan, Lithuania booked its place in the second round. The victory also assured Australia of advancing from Group H.

Lithuania, which is 2-0, had six players in double figures, topped by Edgaras Ulanovas and Jonas Valanciunas with 13 each. Kyle Wiltjer led Canada with 24. Canada fell to 0-2.

At Nanjing, New Zealand downed Montenegro to move to 1-1 in Group F. Montenegro is 0-2.

At Nanjing, Brazil improved to 2-0 and moved closer to the second round. Greece fell to 1-1 in Group F and will need a win in its final group game with New Zealand.

Anderson Varejao hit a critical jumper for Brazil with 14 seconds left and Leandrinho Barbosa hit a final free throw for the three-point edge.

Kostas Sloukas had three free throws with two seconds left that would have tied the score, but he made only two.

At Shanghai, the Americans (2-0) scraped by, and they needed overtime to do it in Group E. The victory moved them into the second round. They face winless Japan in the final group game.

Khris Middleton led the Americans with 15 points and Kemba Walker added 14. Ersan Ilyasova of the Milwaukee Bucks had 23 points and 15 rebounds for Turkey (1-1).

At Shanghai, Blake Schilb and Jaromira Bohacik each scored 22 points and the Czech Republic kept Japan winless in Group E.

Tomas Satoransky had 15 points, seven assists and six rebounds for the Czechs (1-1).

At Shenzhen, the Dominican Republic improved to 2-0 and Germany fell to 0-2 in Group G.

Victor Liz led the Dominicans with 17 points and Eloy Vargas added 16 as the Caribbean team advanced to the second round. Dennis Schroder was Germany’s top scorer with 20, and Daniel Theis added 12.

At Shenzhen, France moved into the second round from Group G along with the Dominican Republic.