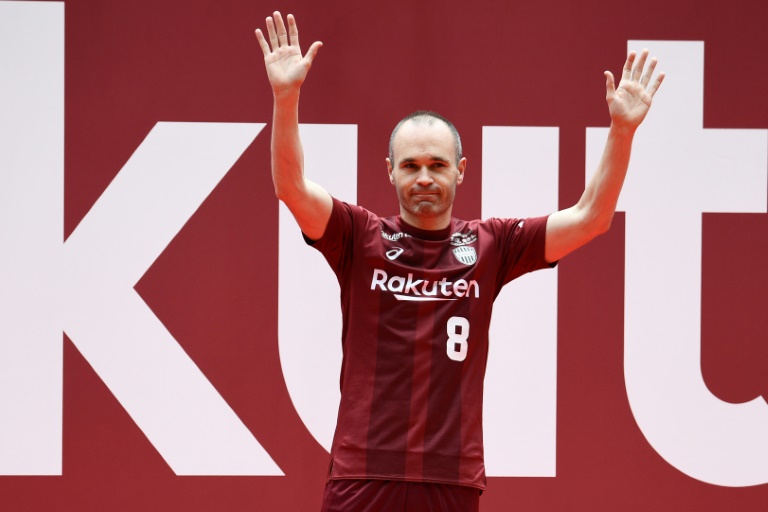 Barcelona legend Andres Iniesta on Saturday made his first appearance at Vissel Kobe since signing for the Japanese side, greeting thousands of fans and vowing to make his new club the biggest in Asia.

Wearing the number eight shirt -- like he did at Barcelona -- the 34-year-old World Cup winner attended a welcome ceremony at the J-League club's home stadium in the western port city of Kobe, together with team owner Hiroshi Mikitani.

"This is a big challenge for me," Iniesta told some 4,000 fans through an interpreter two days after signing his contract at a glitzy unveiling in Tokyo.

He displayed his ball-juggling technique and kicked footballs into the crowd, delighting fans.

"I aim to contribute to the team as much as possible," said Iniesta, who is reported to have agreed a three-year deal with an annual salary of $30 million, a J-League record.

"I think I should pursue the best objectives in both football and my life," he added, saying he wants Vissel to win the league and "if possible, conquer Asia".

The midfielder, who famously scored Spain's winning goal against the Netherlands in the 2010 World Cup final, lifted 32 major trophies and made 674 appearances for Barcelona.

The Spain icon's decision to choose Kobe arguably represents Japanese football's biggest transfer coup, with many top players now moving to cash-rich Chinese clubs in the twilight of their careers.

Iniesta had said earlier this month that moving to a Chinese club was also an option for him.

His signing is a timely boost to the J-League, which used to attract luminaries such as Brazilian great Zico and former England star Gary Lineker when it began in 1993 but has struggled to attract marquee players in recent years.