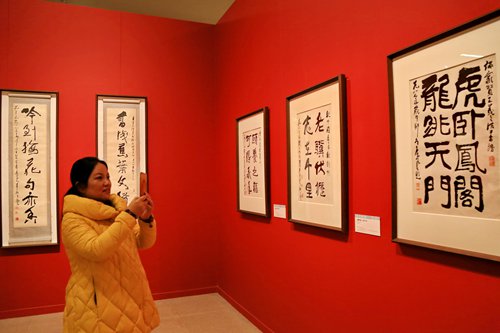 An exhibition titled The Perfection of Ink Works: The Exhibition of Li Keran's Works Created in His Last Ten Years kicked off at the West Hall of the National Museum of China on Thursday to commemorate the 110th anniversary of Li's birth.The exhibition, which will last one month, features 162 artworks covering the decade prior to his death in 1989, including 68 paintings and 94 calligraphy works."Most of the paintings on display are landscapes. These landscapes are all painted with ink, mostly in black and white with a few color paintings," Suo Baofeng, an artist from Likeran's studio, told the Global Times.During his lifetime, Li Keran (1907-89), a renowned contemporary artist, experienced the war and the birth of New China while conveying his good wishes for the country in his artworks. The Chinese title of the exhibition, Mo Tian Shen Jing (Ink Sky, Beautiful Scenery), is in part named after Li's studio "Mo Tian Ge," or Ink Sky Studio, and two characters in Li's postscript to his painting Flying Waterfall on the Lofty Cliff, in which he described painting beautiful scenery (shenjing). Covering the last 10 years of his life, the exhibition also serves as a demonstration of the culmination of his artistic achievement. Compared to the artist's early years, in his later years Li had formed his own unique ink language which he described as "beating with the most powerful force."One highlight of the exhibition is a recreation of Li's Shi Niu Tang (Lit. learning from cattle) studio in Beijing's Xicheng district, which gives visitors an opportunity to see how the artist decorated his workspace. Li had a special affection for cattle, which he saw as representing hard-work, determination and humbleness. This affection can be seen reflected in his artwork as many of his paintings feature shepherd boys and cattle, images that are traditionally used in Chinese poetry and literature works. Depicted in different poses, these shepherd boys and cattle convey the feeling of a leisurely lifestyle.The exhibition also features many of the artist's calligraphy works, which demonstrate his skill in the art form as well as his love for his country, family and friends with the content of his writing.