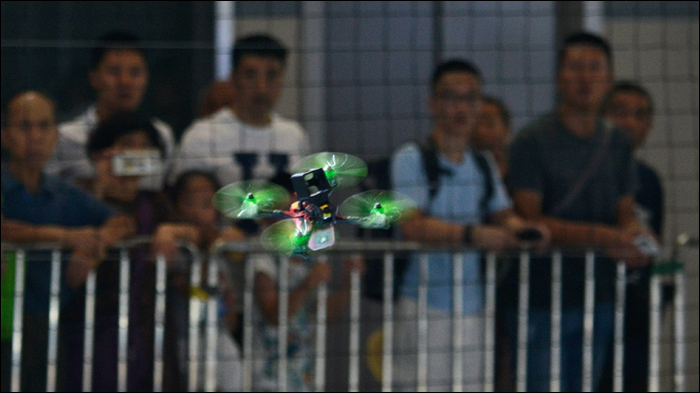 The International Drone Racing Grand Prix ended on Friday as Zhou Jiyong from Hongkong, China, won the top prize at the intense competition.

As one of the key events during the 2018 Smart China Expo, this event attracts top-class contestants from six countries and regions including China, Germany, Singapore and Austria.

Similar to full-size air racing, the goal is to complete a set course as quickly as possible. Drone racing began as an amateur sport in Apollo XI RC Field, Los Angeles, the United States in 2014, with an official race produced by Aerial Grand Prix.

Lin Ge, chief judge with the grand prix, said that unlike the common camera drones that focus on stability and safety, racing drones usually are smaller and lighter and focus on speed and flexibility, at speeds of 140km/h to 160km/h. Some can fly at speeds up to 200km/h if things go well.

Lin told Xinhua that pilots must wear goggles that show them a video feed from a camera built into the drone, and they hold a console with twin joysticks that control the direction, angle, pitch, yaw, and speed of the flight.

There are 13 arches along the racing track. During the competition, drones are streaking at over 140km/h over the nets that protect the spectators, through the first check gate – a neon circle – then banking a 90-degree left over a reflecting pool. Then the drone shoots up, loops around and drops down. Each match lasts about two to three minutes.

"This is a tough game. It's my honor to compete with all these top-class contestants," said Zhou Jiyong,the winner, adding that he just tried to be in the moment and focus on the routine during every match.

Lin believes that as an international event, the race will expand popularity among young Chinese and boost the development of the unmanned aerial vehicle (UAV) sports industry in China.