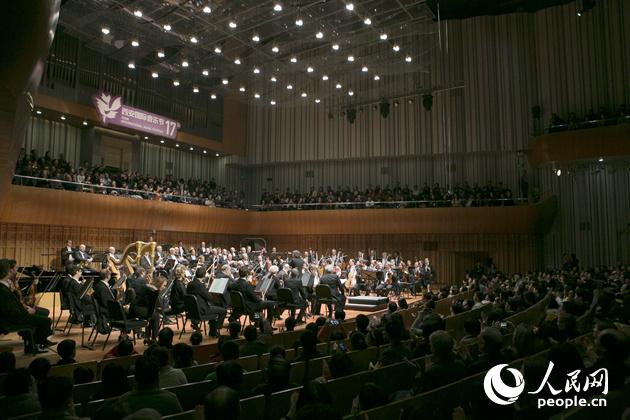 The scene of the music festival (Photo: People's Daily Online)

The 17th Xi'an International Music Festival opened Tuesday in the city of Xi'an, capital of Shaanxi.

Dudamel and the Berlin Philharmonic performed world-renowned American composer Bernstein's Symphony No. 1 Jeremiah, at Xi'an Concert Hall Tuesday evening, as the opening performance of the festival, commemorating the 100th anniversary of the great composer's birth.

Their performance of Shostakovich's Symphony No. 5 in the second half also received thunderous applause.

"This is the most anticipated concert of the year for me," said Mao Xiao, an undergraduate studying in neighboring Sichuan Province. She traveled three hours by train and waited six hours to get a ticket.

The music festival has invited more than 500 artists from 16 countries to give around 30 performances over the following two months. Well-known pianist Ivo Pogorelich and baritone Leo Nucci will perform at the festival.

Besides various concerts, the festival will also hold a series of activities such as lectures, to bring classical music to regular people.

The first Xi'an International Music Festival was held in 2002. So far, more than 370 performances have been organized, and over 6,400 artists from across the world have participated, attracting over 380,000 people.

The Xi'an International Music Festival has become one of the most influential art festivals in central and western China.