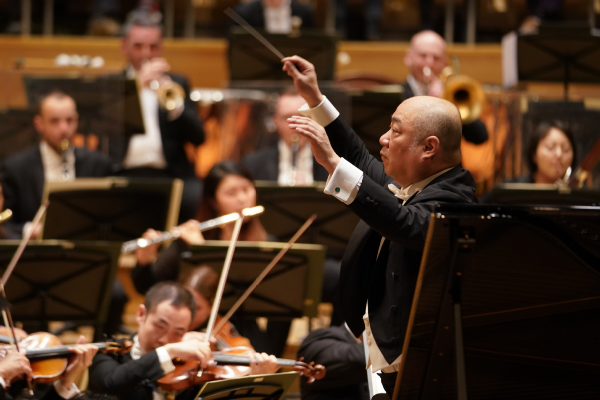 Initiated by Chinese conductor Xu Zhong, an online concert called Music One World will be broadcast from 8 am to 8 pm on Wednesday through Chinese media platforms. (Photo: China Daily)

Nearly 100 musicians, over 10 symphony orchestras and theaters from around the world will join in a 12-hour online concert, Music One World, which will be broadcast from 8 am to 8 pm on Wednesday through Chinese media platforms, including video streaming service Youku and Shanghai radio's, Classical Music 94.7 FM.

Initiated by Chinese pianist and conductor Xu Zhong, the idea of the online concert was inspired by a performance held at the Sydney Opera House on Feb 11, in which the opera house's symphony orchestra performed the second movement of the Yellow River Piano Concerto, Ode to the Yellow River, composed by Chinese musician Xian Xinghai, and under Xu's baton. Xu also played piano during the performance. The performance paid tribute to Chinese health workers amid the coronavirus pandemic.

"As the COVID-19 coronavirus pandemic spreads, it has become a global fight. It has made an impact on every aspect of our lives. For musicians, we cannot perform at concert halls but we don't want to stop playing and sharing  music, which has the power to unite people," said Xu, who was born in Shanghai and received classical music training at the Conservatoire National Supérieur de Musique de Paris. "Both of my parents are doctors. When I see doctors and nurses fighting at the front lines against the virus, I feel very touched and connected" to the medics.

The performance will kick off the 12-hour-long online concert, which will be followed by performances by symphony orchestras from Asian countries, such as the Daegu Symphony Orchestra from South Korea performing Dmitry Shostakovich's 7th Symphony, known as the Leningrad symphony, and the Singapore Chinese Orchestra playing an original piece, Confluence, by Singaporean composer  Wang Chenwei. Two musicians from the Suzhou Symphony Orchestra, Tomoyo Kobayashi on clarinet and Greg Vull on trombone, also will join in the concert.

Musicians from Israel, Mongolia, Moldova and Russia will perform, including the Israel Camerata Orchestra Jerusalem playing the Chinese piece, Beautiful Night, composed by Liu Tianhua and soprano Olga Senderskaya singing Spring Waters, one of the most popular songs by Sergei Rachmaninoff.

"We planned to perform Beethoven's nine symphony orchestras and his only opera, Fidelio, in China this year. We hope that we can do it as soon as the viral outbreak ends," said German conductor Will Humburg, conductor of the Bonn Opera, who will join in the online concert.

Other musicians who will perform in the online concert include Chinese pianist Zhang Haochen, German pianist Sebastian Knauer and French conductor-pianist Philippe Entremont.

On April 10, Chinese pianist Zuo Zhang and the Shenzhen Symphony Orchestra recorded Piano Concerto No. 1 in D Minor by German composer Johannes Brahms at Shenzhen Concert Hall without an audience. The show will premiere during the online concert.