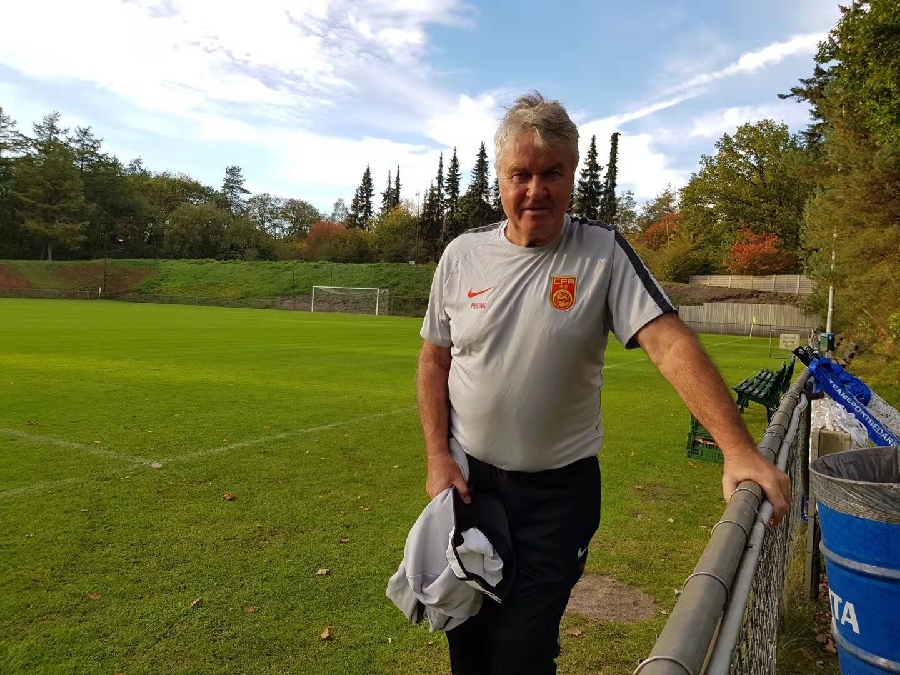 Veteran Dutch coach Guus Hiddink began a long journey with China U-21 in the Netherlands this week, with the ambitious goal of qualifying for the Tokyo Olympics in 2020.

In the middle of the Veluwe woods near Hoenderloo, a small village in the central province of Gelderland, the sounds of birds singing, acorns dropping, and football training can be heard. Players scream for the ball, and coaches give comments and advice.

"Keep it on the ground," shouts one after a player shoots a high ball. "Good ball," he says after another player makes a successful pass from one side of the pitch to the other.

This is a training session for China U-21, under the guidance of the 71-year-old Hiddink, and his assistants Jelle Goes and Harry Sinkgraven, along with other Dutch and Chinese coaches. The hotel in Hoenderloo that is hosting the Chinese team for the 13 day training camp is familiar ground for Hiddink.

In 1998, Hiddink trained the Dutch national team for that year's World Cup on this same pitch. It was the start of a beautiful summer for the Netherlands, as they finished the tournament in fourth place. Hiddink subsequently returned to these fields many more times, with South Korea (semifinalists at World Cup 2002) and Australia (second round at World Cup 2006).

Now Hiddink is back in Hoenderloo with China, and embarking on a new journey. Two years after his last coaching job at Chelsea, after a rich career as coach of PSV Eindhoven, Fenerbahce, Valencia, Real Madrid, Real Betis, Anzhi Makhachkala and the national teams of the Netherlands, South Korea, Australia, Russia and Turkey, Hiddink last month decided to accept an offer from the Chinese Football Association (CFA) to become the new coach of the country's U-21 team.

"I like to work with young lads and make them better," Hiddink told Xinhua at the side of the training pitch. "The CFA said they would love to see a Chinese football team at the Olympics and they asked me to help develop players and build a team for this. They added that it would be very difficult, because they had never qualified. Only as host nation were they present in 2008."

"I answered that I would like to take the challenge, but I wanted to work my way," Hiddink added. "I wanted to see the players frequently and over a longer period of time. They said they wanted me to do it the way I did before in Asia. So I accepted and this training camp in Hoenderloo is only the first step. We want to bring them together more times in China, Europe or wherever."

On a crisp sunny day in Hoenderloo it is assistant Sinkgraven who leads a passing game. Hiddink watches on from a distance, occasionally having a few words with one individual, or putting an arm around another's shoulder. The session ends with an eight-a-side match, with some players getting some rest, others in the gym and an unlucky few being treated for injuries. Sinkgraven and Goes both lead a team, with Hiddink staying in the middle of the field for additional comments.

From the way he walks you can tell Hiddink's age; from the way he talks you would think him 20 years younger. The veteran seems to relish his new job working with his young Chinese charges.

"I have had the pleasure to work with many different cultures," Hiddink said. "I have learned from every culture. In the Asian culture players are very respectful and obedient. I also noticed that here, but I also noticed that on this third day they loosened up already and I want that. I want them to take the initiative if they have the quality. I also saw them run like headless chickens on the first day, but now it is already better. That's what we are working towards, keeping the good and getting rid of the bad."

Before being officially appointed, Hiddink had already watched China U-21 play in September, in a four-nation championship in Yunnan in which the team finished second, with one win over Myanmar and draws against Tajikistan and Uzbekistan. "That was not convincing, both the team results and the individual performances," Hiddink said.

"It is hard to create the best squad, China is a big country and it is hard to get an overall picture," he added, referring to his selection criteria. "But we are just at the beginning of our selection process, the first stage of which will run until December. We are now looking at the boys here. Some are naturally gifted, and technically good with a good pass, and others are more clumsy."

"We are in contact with many experts to give us information, we are watching a lot of videos and we are now looking at who is good enough to continue with or who can be replaced," Hiddink said. "In January next year we should have a squad of 23 to 28 players who have the qualities to play the way we want, and with whom we can enter the AFC U-23 Championship qualification tournament."

For this training camp, Hiddink mainly chose players born in or after 1997, as the men's football tournament in Tokyo is restricted to players born on or after January 1 that year, with a maximum of three overage players allowed. Immediately after the training camp in the Netherlands, Hiddink will travel to Jakarta to see China U-19 in action in the AFC U-19 Championship.

"I've seen some U-19 players with potential on video and now I want to see them for real," Hiddink said. "If these young guys are good enough to play for the U-21 team I will pick them."

The first goal for Hiddink and China is the AFC U-23 Championship qualification tournament from March 18 to 26 next year. If China clears this first hurdle they can qualify for the Olympics during the AFC U-23 Championship in January 2020. The top three teams of this final tournament will qualify for Japan, with the hosts already being granted a spot.

"We want to bring the boys to a level where they can be competitive with the best teams in Asia, like Japan, South Korea and Australia, although we know it is difficult, because as a football nation China is a developing country," Hiddink acknowledged. "We will attempt to reach the impossible. But first we have to see in March. If it's negative and it ends there, we will stop. If it is positive we will continue until the next qualifying round."

With a satisfied smile, Hiddink says goodbye and walks back to the hotel with his staff. On to the next staff meeting, evaluating the day and planning the next one, with many more discussions ahead on the road to Tokyo 2020 with the Chinese Olympic dream.