CULTURE Into The Void: hyper-real 'Star Wars' VR makes you the hero

Into The Void: hyper-real 'Star Wars' VR makes you the hero 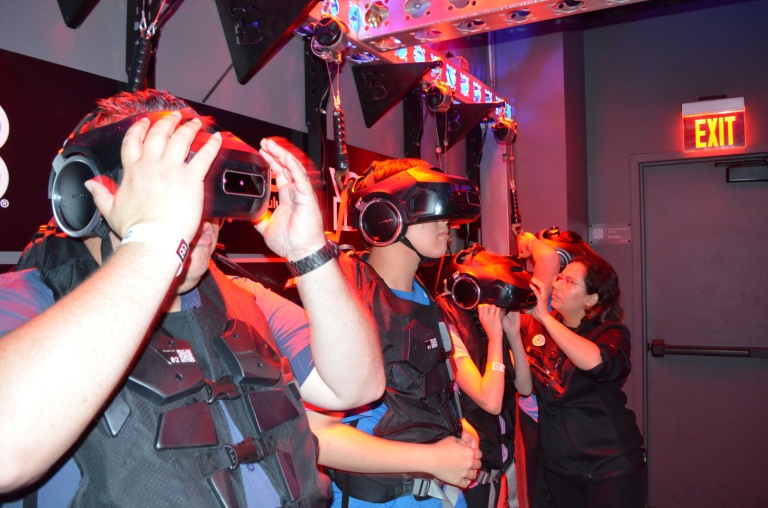 Clients of the VR attraction, The Void, in California put on their 3D headsets before launching into their adventure (Photo: AFP)

Imagine putting on a helmet, lowering the visor and being transported immediately from your humdrum day-to-day existence into your own "Star Wars" adventure.

Well, holster that blaster because the kind of fantasy that could once only be woven into the dreams of the young is coming to a theme park or shopping mall near you -- perhaps sooner than you think.

The Void is the latest in a flood of businesses offering whole-body, fully immersive virtual reality experiences for about double the price of a movie ticket.

The company's "Star Wars: Secrets of the Empire" scenario instructs players that their mission is to recover Imperial intelligence critical to the survival of the Rebellion -- yes, that Rebellion, of Luke Skywalker and Princess Leia.

In reality, the players are in a room full of cameras, movement sensors and other gadgetry in the shadow of Disneyland in southern California.

As far as they are concerned, they are rebels disguised as Imperial stormtroopers on the molten planet of Mustafar, battling giant lava monsters and generally taking care of business.

Wearing vests weighed down by high-tech hardware, the players can reach out and touch what they are seeing in their visors, feel the breeze on their faces and hear creatures scuttling around them.

Designed in partnership with Disney-owned Lucasfilm, which makes the "Star Wars" movies, the experience involves all the senses, says marketing director John Kirkpatrick.

"I really felt like I was in the movie," says player Sean Oshima, 29, a technology consultant.

"I was really amazed by this technology. You can really feel the agents shooting you."

There are locations in North America, the Middle East and Europe and the company is still growing, with other scenarios including a narrative tour around the movie "Ghostbusters," and a haunted house experience.

Without the bells and whistles, the interior is much as you might expect -- a room measuring about 10 square meters (110 square feet), partitioned here and there to guide players through the attraction.

The cutting-edge tech works in tandem with run-of-the-mill radiators and fans varying the atmospherics, while foam mats double as magma and scent diffusers provide the "smell-o-vision."

Jeremy Bailenson, founding director of Stanford University's Virtual Human Interaction Lab and author of the best-selling "Experience on Demand," told AFP the sector was on the cusp of a boom.

In California, VR attractions under development or already out there include the free-roaming group experience "Alien: Descent" in Orange County and an ImaxVR center in Los Angeles.

An attraction based on CIA analyst "Jack Ryan," the hero of the Tom Clancy novels and an upcoming Amazon TV series, was among numerous VR experiences showcased at the recent San Diego Comic-Con fan event.

Video games are criticized for isolating players, but proponents of virtual reality say it can be an inherently social experience, as it promotes teamwork through problem-solving.

The technology is developing rapidly and has already moved beyond pure entertainment into education and science.

Acclaimed filmmaker Alejandro Gonzalez Inarritu got a special Oscar last year for a virtual reality installation focusing on the plight of migrants, which was shown in several cities including Los Angeles.

The six-minute "Carne y Arena" ("Virtually Present, Physically Invisible") takes viewers on the harrowing trek many migrants undertake through the Sonoran desert in the southwestern US.

As sirens wail, each participant -- barefoot on the sandy ground and wearing VR goggles -- experiences the journey alone, joined only by a small band of virtual people hoping to reach America.

Border guards armed to the teeth separate the men from the women and the children. Their abandoned shoes litter the ground, as one person screams out in pain and a tragedy looms.

From the art world, a successful exhibition on David Bowie is to be adapted into a VR experience by Sony, while architects, teachers and many others in the public and private sectors are increasingly using the technology to illustrate projects and ideas.

"Picture if an educator or a student goes into a world, and instead of just learning about it through a textbook, you can actually interact (with) that locale," said Kirkpatrick.