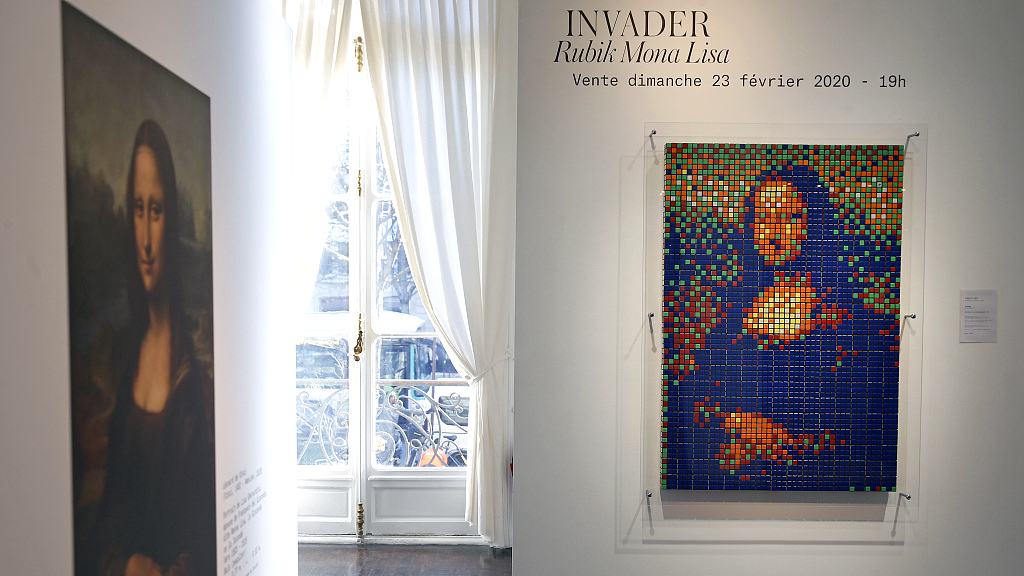 French street artist Invader's interpretation of the Mona Lisa made of 330 Rubik's Cubes sold for 480,200 euros (over 520,000 U.S. dollars) on Sunday at the Artcurial auction house – a modern art auction in Paris, well above presale estimates of up to 150,000 euros, the organizers said.

The 2005 artwork by legendary street artist Invader uses the plastic puzzles' squares to create a mosaic of the Mona Lisa and her famous smile in garish colors.

The sale coincided with the closure of a blockbuster Leonardo da Vinci exhibition at the nearby Louvre museum, the home of the real Mona Lisa. That show marked the 500th anniversary of the death of the Renaissance master.

A 'modern take on the world's most famous painting'

Invader, who began exploring the use of Rubik's Cubes in artwork in 2004, is known for his mosaic tile works featuring pixilated versions of the 1978 Space Invaders video game characters, which "invade" cities around the world.

The Rubik Mona Lisa was created in 2005 and is the first in Invader's "Rubikcubism" series, in which he recreates well-known Old Master works. The artwork is regarded as "modern take on the world's most famous painting."

"Amongst his works on this theme, which he has explored in a variety of forms, this rubikcubist Mona Lisa is actually the representation that is most faithful to the original," said the auction house in a statement.

The auction house quotes him as saying in 2007 in regard to Rubikcubism: "To view a piece, you have to stand back from it. Close up, the image is nothing but a mass of cubes and colors, it's only when you stand back that the face emerges."

"The further away you stand, the clearer it becomes."

'Out of the context of street art'

Invader, who defines himself as an UFA, an Unidentified Free Artist, wears a mask and insists on his face being pixilated for his rare appearances on camera.

He has a large following of fans who use a Smartphone app, "Flash Invaders", to snap pictures of his mosaics if they're authentically his, rack up points and compete with other players.

Arnaud Oliveux, Auctioneer at Artcurial, said that "Invader is originally a Parisian artist, but he's really a worldwide artist, because he has created 'invasion' campaigns in cities all over the world."

"He has [now taken] Rubik's Cubes, and decided to use them as a medium for a series of works, taken out of the context of street art that Invader comes from, to make gallery works like this one, which is one of the first."