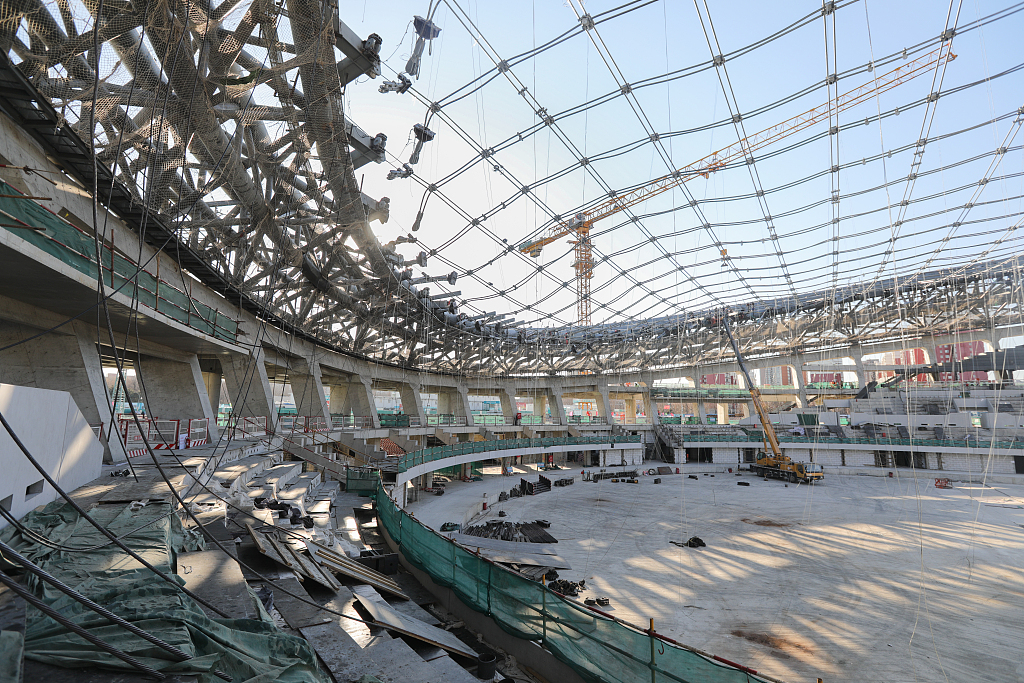 The new stadium under construction for the 2022 Winter Games (Photo: VCG)

Bach, who inspected several Beijing 2022 competition zones in Zhangjiakou and Yanqing on Tuesday, made the comments during an exclusive interview with Xinhua.

"The impressions are really excellent. The progress being made is remarkable. The projects are within the schedule," Bach said of the construction sites for events including ski jumping, Nordic combined, alpine skiing and biathlon.

The IOC chief added that he was equally impressed by the rise in popularity of winter sports among Chinese people.

With roughly three years to go before the 2022 Winter Olympics open, the seven-year preparation time has reached its halfway point. When asked how many marks out of ten he would give for the work already completed, Bach replied "ten".

While the Olympic Games showcases the world's most elite athletes, the broader Olympic Movement centers on blending sport with culture, which Beijing 2022 has made efforts to embrace.

"With an education program, we see that there is a team of people who are touring China and spreading Olympic values among the nation's youth. And we see many pieces of art being produced and displayed around the world, including at the Olympic Museum in Lausanne," Bach said.

The 2022 Winter Games will take place in February, which will coincide with that year's Spring Festival, China's most important public holiday. Bach said that it would add to the experience for both the Games' participants and the Chinese people.

Apart from hosting a successful Winter Games in 2022, China also aims to have at least one competitor in each of the 109 events. Bach admitted that this would represent a big challenge for the host nation, but still expressed confidence in the Chinese athletes.

"It is very important that China has set this goal, because the success and participation of the home team always plays an important role for the overall success of the Olympic Games," Bach said.

"There we can see some progress already being made, but we can see that there is still a lot to do. [Achieving this] needs a lot of international experience, and it also needs cooperation with international coaches, because there is a lack of experience in both training and competition.

"But knowing my Chinese friends, I am sure they will make good use of the remaining three years and will eventually have a strong team in these Winter Olympic Games."