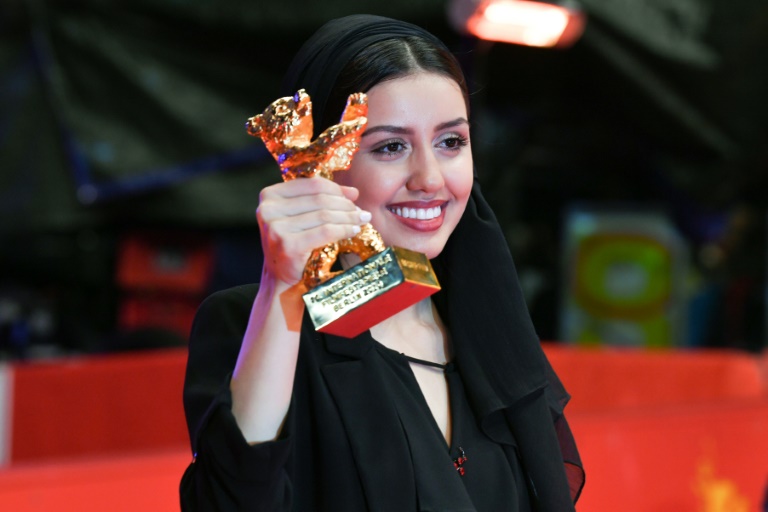 Iranian actress Baran Rasoulof posed with the trophy 'Golden Bear for Best Film', on behalf of her father, director and producer Mohammad Rasoulof, who is not allowed to leave Iran. (Photo: AFP)

Dissident Iranian director Mohammad Rasoulof on Saturday won the top prize at the Berlin film festival for "There Is No Evil", a searingly critical work about the death penalty in his country.

Rasoulof, 48, is currently banned from leaving Iran and was unable to accept the Golden Bear in person.

Accepting the award on his behalf, producer Farzad Pak thanked "the amazing cast and crew who, put their lives in danger to be on this film."

The film tells four loosely related individual stories about the death penalty in Iran, from the executioner to the families of the victims.

Rasoulof was sentenced to a year in prison last year for "attacking the security of the state", and banned from making films for life.

Speaking to a news conference via mobile phone, the director said his latest film was about "taking responsibility" under despotism.

"You can try to put aside your own responsibility and pass the buck to the government... but (people) can say no," he said.

The runner-up jury prize went to Eliza Hittman's teenage abortion drama "Never Rarely Sometimes Always", which had been a favourite among critics.

Sidney Flanigan plays a 17-year-old from Pennsylvania forced to travel to New York in order to abort an unplanned pregnancy.

Hailed for its empathy and emotion, female solidarity is at the heart of the film, in which male characters are marginalised and often predatory.

Audiences and critics were particularly enthralled by an intense, single-shot scene in which Flanigan's character answers personal questions at a clinic.

"While I was researching this film, I spent a tremendous amount of time inside planned parenthood and other clinics," said Hittman.

She added that she had been "humbled" by that experience, before addressing the nurses and social workers who work in such clinics.

"I want to thank them for their incredible service to our countries, for protecting the lives and rights of all people with uteruses."

Hittman's success came in the wake of a controversy earlier in the festival over jury president Jeremy Irons' past comments on abortion and women's rights.

In a 2016 interview with the Guardian, Irons had said abortion "harms a woman" and that the church was "right to say it was a sin".

At his opening press conference, the jury head was forced to clarify that he supported "wholeheartedly the right of women to have an abortion should they so decide".

The debate over women's representation and the #MeToo movement continued throughout the festival, fuelled in part by news Monday of Harvey Weinstein's conviction for rape and sexual assault.

New festival directors Carlo Chatrian and Mariette Rissenbeek also came under fire for picking one fewer female-directed film than in the previous year.

And there was widespread outrage over the Russian film "DAU: Natasha", whose cinematographer Juergen Juerges won the Silver Bear for Outstanding Artistic Contribution on Saturday.

Part of the sprawling, controversial Russian art project "DAU", it was widely slammed for an interrogation scene which included a graphic sexual assault.

The makers of the film were also forced to deny rumours of abuse on set.

Ahead of the awards ceremony, a handful of protesters outside the venue held up a banner reading "DAU = violence and abuse".

Yet Juerges disputed those claims, saying that director Ilya Khrzhanovsky "may push boundaries professionally, but he does not cross them".

The award for Best Actor went to Italy's Elio Germano for his portrayal of the mental and physical struggles of painter Antonio Ligabue in "Hidden Away".

"I dedicate this prize to all the outcasts, all the people who are a little bit strange," said the 39-year-old.

The award for Best Director went to South Korea's Hong Sangsoo for "The Woman Who Ran", a minimalistic film about a woman whose husband is away on a business trip.

"Delete History", a French comedy about society in the age of the internet, won the "70th anniversary Silver Bear".

The prize replaced the traditional "Alfred Bauer Prize", which was removed from the list of "Silver Bears" after it emerged that Berlinale founding director Bauer was a high-ranking Nazi.