CULTURE Iraqi farmers fight to save cattle from drought

Iraqi farmers fight to save cattle from drought 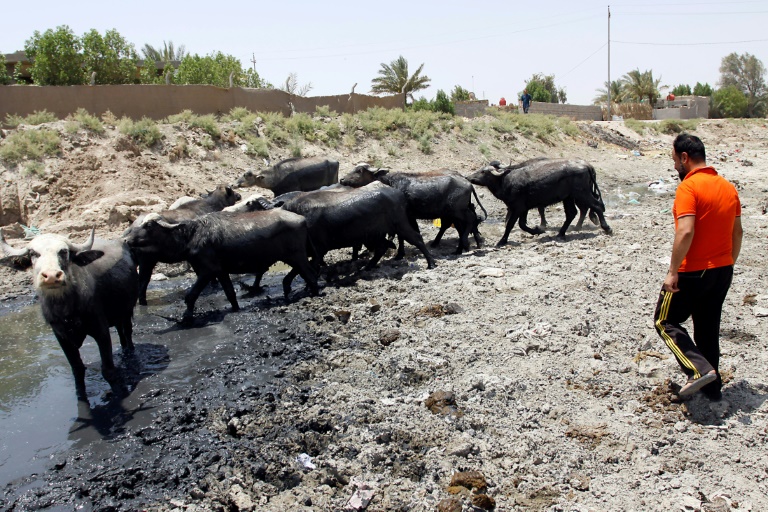 As southern Iraq suffers through a punishing drought, desperate cattle breeders are having to sell off animals to keep others alive. (Photo: AFP)

Iraqi farmer Sayyed Sattar knows he'll soon have to let some of his buffalo go as he surveys the herd bathing in a dwindling pond close to the holy city of Najaf.

As southern Iraq suffers through a punishing drought, desperate cattle breeders are having to sell off animals to keep others alive.

Sattar, 52, has already seen some of his buffalo die of thirst.

Now, in a bid to stop any others being lost, he's being forced to say goodbye to some of his prized beasts.

"With the money, we will be able to buy water and hay for the rest of the herd," he tells AFP, his head covered with a traditional black and white keffiyeh scarf.

Sattar is far from the only farmer hit by the drought.

Local authorities estimate that some 30 percent of cattle across the south of the country have been lost during the drought, either dying from thirst or sold off for slaughter.

That is a major blow for the estimated 475,000 families who make their livings from livestock across the south of the conflict-hit country.

Herder Ali, 24, understands only too well the challenges being faced.

He has to travel ever greater distances with his flock to find water.

Around him, canals have run dry and the cracked earth, empty water pipes, and dead grass testify to how few options farmers now have.

To quench the thirst of their animals they have to pay, and the price of water has shot up, he says.

The lack of water is painful in an area that once formed part of the so-called "fertile crescent".

Dubbed the "country of two rivers" due to the presence of the mighty Tigris and Euphrates, Iraq has seen its water supplies shrinking for years.

This year rainfall has been particularly scarce and reservoirs currently stand at only 10 percent full.

Beyond the natural causes there is also a human factor worsening the problem -- the sharing of water resources on a regional level.

Neighbours Iran and Turkey have in effect rerouted several rivers and tributaries that used to help irrigate Iraq.

The recent launch of Turkey's Ilisu dam on the Tigris has provided another blow for Iraqi agriculture and in June the authorities were forced to make a tough call.

The agriculture ministry suspended the growing of rice, corn and other cereals that consume a lot of water.

To help keep livestock watered, trucks are making the rounds in southern Iraq, offering to fill up the plastic tanks around cattle sheds for $20 (17 euros).

But as farmers see the costs soar, the price that their cattle fetch is collapsing.

Animals that once could have gone for up to $5,000 a head are now selling for as little as $1,500, meaning that cashing in on a buffalo can only cover the herd for two months.

To try to make ends meet many farmers have had to resort to taking out loans at banks and going into debt.

Unable to pay off their bills, a group of farmers recently took to the streets in southern Iraq asking for delays in their payments.

"Never in its history has Iraq known such a catastrophe," said Ahmed al-Issawi, head of the agricultural cooperative in Najaf.

"Our animals are forced to drink water where even mosquitos can't survive."

The drought has seen other problems increase -- disease, worms and epidemics.

Animals "contaminate each other very quickly and die", Issawi says.

The Mesopotamian Marshes, one of the biggest wetlands in the region, have long been seen as one of the jewels of southern Iraq.

But now they no longer help guarantee an income for those who live there, meaning people have already started to move away -- and more look set to follow.

"There will be an exodus," Issawi warned.