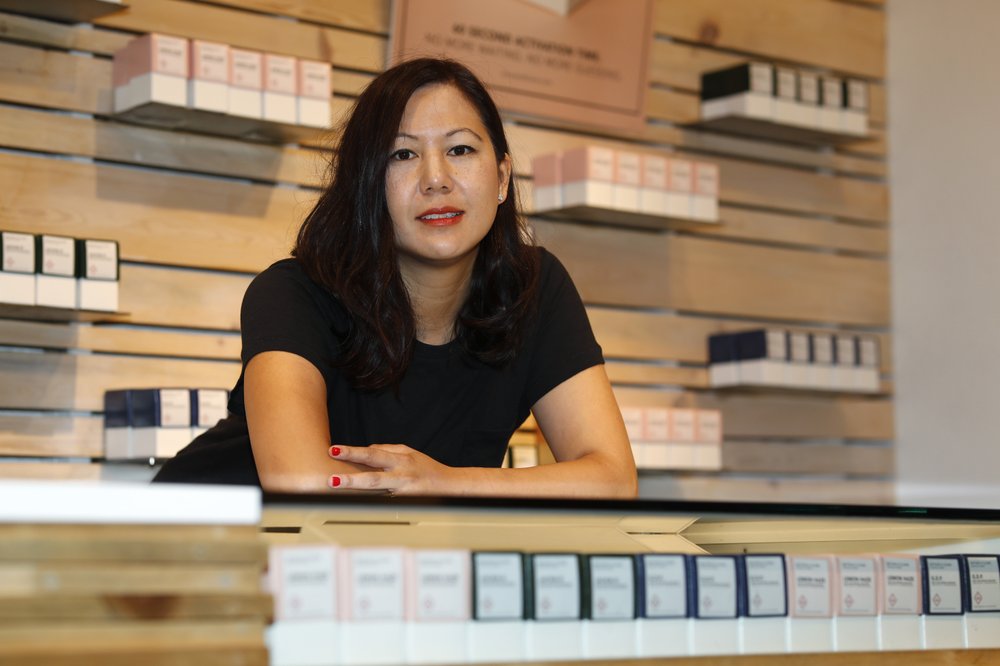 In this Friday, July 26, 2019 photo, Leslie Siu poses for a portrait next to her cannabis products geared toward women on display in Groundswell dispensary in east Denver. Pregnancy started out rough for her. Morning sickness and migraines had her reeling and barely able to function at a demanding New York marketing job, so like rising numbers of US. (Photo: AP)

Pregnancy started out rough for Leslie Siu. Morning sickness and migraines had her reeling and barely able to function at a demanding New York marketing job, so like rising numbers of US mothers-to-be, she turned to marijuana.

“l was finally able to get out from under my work desk,” said Siu, who later started her own pot company and says her daughter, now 4, is thriving.

There’s no proof that cannabis can relieve morning sickness, and mainstream medicine advises against use in pregnancy because of studies suggesting it might cause premature birth, low birthweight and infant brain deficits. But the National Institute on Drug Abuse is pressing for more solid evidence. Many of those studies were in animals or complicated by marijuana users’ other habits and lifestyles.

“I don’t want us to cry wolf,” said Dr. Nora Volkow, the agency’s director. “We have to do these studies in a way that can identify risks.”

With nearly $200,000 from her agency, University of Washington scientists in Seattle are seeking clearer answers in a new study investigating potential effects on infants’ brains. The agency is supporting three similar studies in other states.

In Seattle, they’re enrolling pregnant women during their first trimester who are already using marijuana for morning sickness. Researchers don’t provide the pot, and the use of other drugs, tobacco and alcohol isn’t allowed. Infants will undergo brain scans at 6 months and will be compared with babies whose mothers didn’t use marijuana while pregnant.

For government and university authorities, it’s worthy research that takes advantage of a booming trend. Recent data show the number of pregnant US pot users has doubled since 2002, with 7% reporting recent use and higher rates in some states.

But some opponents of recreational marijuana who think the science is settled have complained to the university and the federal government, calling it bogus research that endorses drug use and needlessly endangers fetuses.

The criticism underscores the challenges of investigating how drugs of any kind affect pregnant women and their offspring.

“There are so many reasons NOT to study drugs — particularly fear of causing birth defects. But the results would be no studies of the drugs’ efficacy during pregnancy, or the risks to the fetus,” said Dr. John Lantos, director of pediatric bioethics at Children’s Mercy hospital in Kansas City, Missouri. “It’s risky to do studies of potentially risky drugs but it’s risky not to do studies.”

Among the most tragic examples is thalidomide, a drug developed in Germany in the 1950s as a sedative. It was later widely promoted and prescribed to treat morning sickness, mostly in western Europe and Canada, despite a lack of research in pregnant women. It soon became linked with severe birth defects and was removed from most markets by the early 1960s.

The US Food and Drug Administration never approved thalidomide for morning sickness because of safety concerns. The agency has approved a synthetic version of THC, the part of marijuana that causes a high, for AIDS-related appetite loss and a similar drug for nausea caused by cancer drugs, but has not approved it for morning sickness.

Scientist Natalia Kleinhans is leading the University of Washington’s study, aiming to recruit 35 pregnant marijuana users and 35 pregnant women who didn’t use pot.

The pot users are asked to buy from licensed dealers and photograph it so researchers can calculate the THC and CBD, another compound that doesn’t cause a high. Participants are paid $300 but can quit using anytime and remain in the study.

Medical and recreational marijuana are legal in Washington state, and Kleinhans says women who use it for morning sickness are different from pregnant pot users in years past, who often did other drugs, smoked or drank.

“They’re making a choice that people might not agree with. But it’s not out of desperation. It’s an informed choice,” said Kleinhans, a brain imaging specialist who studies the brain and behavior.

Study opponents contend that researchers are recruiting marijuana addicts, that payment encourages participants to keep using, that women aren’t being adequately informed of risks, and that babies will be harmed by being tested. Researchers say MRI brain scans are safe and that infants will be tested while sleeping so won’t need potentially risky sedatives.

While more than 30 states have legalized marijuana for medical and/or recreational use, opponents also note that the federal government still considers pot an illegal drug — a stance that scientists say has hampered research.

Dr. Pat Marmion, an OB-GYN in southern Washington, says he helped coordinate efforts to file complaints with the university and the US Department of Health and Human Services, which oversees the National Institutes of Health. An HHS spokesperson declined comment.

“We should be encouraging women who are pregnant to not use marijuana instead of incentivizing them to continue,” Marmion said.

Under US law, research that involves humans must be approved by review boards to make sure participants’ rights and safety are protected.

Karen Moe, director of the university’s human subjects division, said authorities there investigated the critics’ concerns and concluded that most were unfounded. But she said they agreed to provide a handout on possible risks from marijuana use in pregnancy, not just links to similar information online, and also reworded recruitment materials to clarify that participants could quit using marijuana and still receive full payment.

“From our standpoint the situation is essentially resolved and the study is good to go,” Moe said.

Dr. Mishka Terplan, a member of the American College of Obstetricians and Gynecologists’ addiction expert group, said that for years, the thalidomide scare “shut down all research of medications in pregnancy.” Not enough is known even about medications commonly prescribed for morning sickness, he said.

“We shouldn’t assume that because we classify something as illegal that it is shameful,” Terplan said. “And that because something is legal and prescribed, it’s helpful.”

The National Institute on Drug Abuse is providing almost $1.5 million for three similar studies of marijuana use in pregnancy — at Washington University in St. Louis, at the University of Denver and at Kaiser Permanente in Northern California.

“One of the big arguments about why this is unethical is that we already know the answers. That is not true,” said Susan Weiss, who oversees outside research for the institute. “We’re living in this very large social experiment and we need to learn from it.”

Leslie Siu, the businesswoman who used marijuana while pregnant, now lives in Denver, where pot is legal, and sells a marijuana-based spray. Siu said marijuana deserves to be studied “so we can get the right answers.”