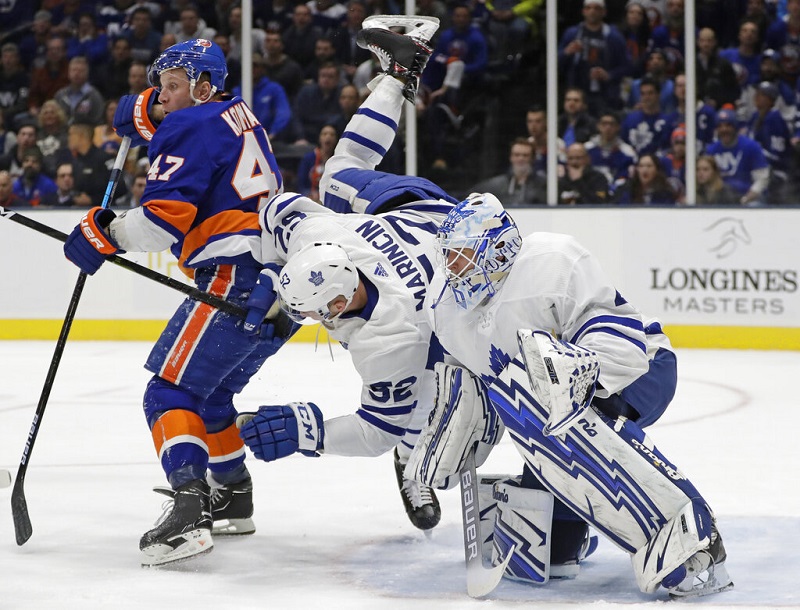 Anthony Beauvillier, Anders Lee and Valtteri Filppula also scored for the Islanders, who had lost three of their last four. Robin Lehner stopped 34 shots to help New York move two points ahead of Washington atop the Metropolitan Division one night before hosting the Capitals. The Islanders' 81 points are one more than they had all of last season.

Islanders fans, vocal on social media about their lingering displeasure with Tavares' departure via free agency last summer after he repeatedly said he wanted to stay, booed loudly when Tavares and the Maple Leafs hit the ice for pregame warmups, and when they came back out for the start of each period. They also serenaded the No. 1 overall pick in 2009 with choruses of "We Don't Need You!" and other derisive chants throughout the game, including around a video tribute midway through the first period.

Zach Hyman scored for the Maple Leafs, who had won three straight.

Jake DeBrusk, Noel Acciari, Patrice Bergeron and Brad Marchand all had goals for the Bruins (38-17-9), who have won nine of their last 10 games and earned at least one point in 15 straight.

The game was the first in NHL history in which teams faced off while each owning simultaneous point streaks of 14 or more contests.

A goal by Tampa Bay's Anthony Cirelli's with 7:08 remaining prevented the Lightning (49-12-4) from being shut out for the first time since losing 1-0 in overtime to St. Louis on Feb. 7.

Alex Galchenyuk also scored for the Coyotes, who completed a four-game season sweep of the Canucks. Vinnie Hinostroza and Richard Panik had three assists apiece — all on goals by Richardson — and Oliver Ekman-Larsson had two assists.

Richardson, who has a single-season career-high 16 goals, scored twice in the first period and completed his second career hat trick in the second period after a deft drop pass from Richard Panik. He tipped in a pass from Hinostroza for his final goal at 8:03 of the third period. It was the Coyotes' first four-goal game since Keith Tkachuk did it on March 20, 1997.

Tanner Pearson and Antoine Roussel scored for the Canucks, who have lost five of six.

As the back-and-forth extra period wound down, Artemi Panarin wove his way through the defense and fed Jones, who knocked the winner past Brian Elliott. Jones got his third overtime goal this season and set a franchise record with the seventh of his Blue Jackets career.

Panarin, Oliver Bjorkstrand and Scott Harrington also scored for the Blue Jackets, who rebounded from a loss Tuesday night to Pittsburgh and hopped over the idle Penguins and Carolina Hurricanes into third place in the Metropolitan Division. Sergei Bobrovsky made 28 saves.

Travis Sanheim had two goals, Jakub Voracek also scored and Elliott had 36 saves as his two-game winning streak came to an end. Elliott is the seventh goalie used by Philadelphia this season, and the Flyers will set an NHL record when recently acquired Cam Talbot starts Saturday at New Jersey to raise that number to eight.

Chris Tierney and Mark Borowiecki scored for the Senators, who lost their sixth straight, and Craig Anderson stopped 22 shots in his ninth straight defeat.

It was the first home game for Ottawa since Mark Stone was traded to Vegas, but thanks to McDavid the Senators had one of their biggest crowds of the season.