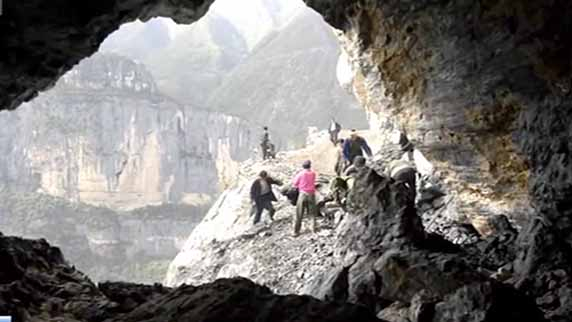 Wuxi County in southwest China's Chongqing Municipality is where you'll find picturesque beauty like China's Grand Canyon. But behind the scenery, this mountainous area is isolated from the outside world for years. Many people in different villages had tried to get out of poverty and built a road with their hands to link with the outside world.

The Lanying Grand Canyon is considered a must-see site in Wuxi County. Stretching more than 60 kilometers with a maximum depth of some 2,500 meters, and the narrowest point is only about 13 meters wide, the canyon is one of the most spectacular sights in China. A 1.2-kilometer-long road that traverses the steep cliffs is another attraction here. Constructed by local villagers in four years, the project was once considered a "mission impossible."

The road connects the small village beside the canyon with the outside world and has helped locals improve their livelihoods. Over the past few years, the canyon has attracted a growing number of visitors, especially during late autumn when the leaves on the mountains turn red.

"Before the road was built, we had to walk for two days carrying our farm produce on back so as to sell them in the city. Our shoulders would have abrasions. In the summer, the towels would be soaked with sweat," said Yang Zhihan, a local villager.

Digging out a road on sheer cliffs was considered a mission impossible. But for the villagers, they just decided to risk it all. They started the arduous work in August 2001. After more than four years of hard work, the road was finally finished, stunning all outsiders, including local officials.

Build roads first if wishing to get rich

The road is a manifestation of China's hard-working spirit. Since it was established, tourism has become a new income source for villagers, the local government's next step is to further improve infrastructure and related facilities to further connect the county with the outside world.

"In recent year, the traffic situation has been improving. Wuxi will focus on the constructions of highways and airport, which will fundamentally break the restrictions on the traffic," said Tang Dexiang, Communist Party of China's Secretary in Wuxi county.

He added the government will accelerate the construction of a highway network, with five highways connecting Sichuan, Hubei and other provinces.