CULTURE Isolation and patience on a quiet Gaza farm

Isolation and patience on a quiet Gaza farm 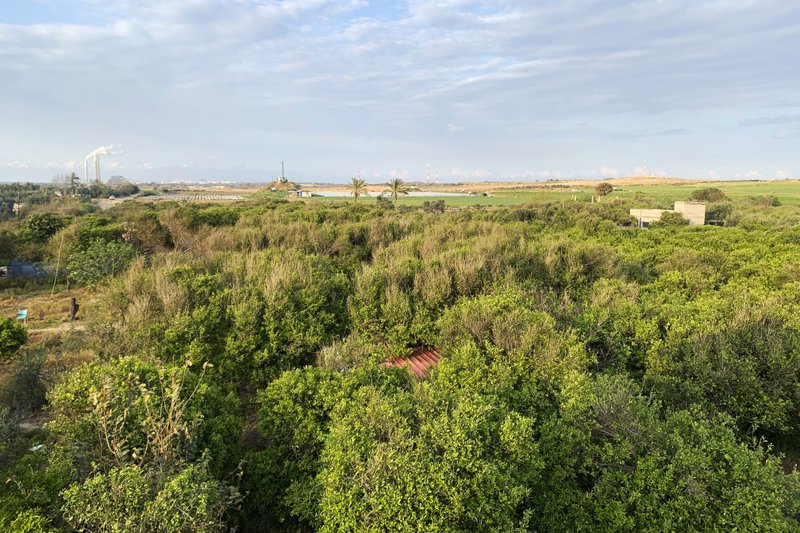 In this April 9, 2020, photo, Fares Akram’s family’s farm is seen in Beit Lahiya, northern Gaza Strip, and on the horizon the Israeli border. Akram hadn’t spent more than a single night at his family’s farm on the northern edge of Gaza since an Israeli airstrike killed his father there more than a decade ago. But the arrival of the coronavirus has upended his family’s notions of danger and refuge. (Photo: AP)

I haven’t spent more than a single night at my family’s farm on the northern edge of Gaza since an Israeli airstrike killed my father there more than a decade ago. But the arrival of the coronavirus has upended our notions of danger and refuge.

During the three wars and countless skirmishes fought between Israel and Hamas since the militant group seized power from rival Palestinian forces in 2007, the borderlands were the front line. Israel would carry out airstrikes, shelling and sometimes full-scale incursions, usually in response to Palestinian rocket fire.

During the wars, Israeli strikes could happen anywhere, at any time. But I felt a little safer in Gaza City. I assumed that media offices were less likely to be targeted.

The virus has different rules of engagement.

It preys on crowded areas where it can leap undetected from one host to another, quietly carried by human breath. Since the first cases were reported late last month, Gaza City feels much more dangerous, with every crowded sidewalk a potential source of contagion.

A broader outbreak in Gaza, where 2 million Palestinians are confined in a narrow, impoverished coastal strip, would be catastrophic. Our health infrastructure has suffered from years of conflict and a blockade imposed by Israel and Egypt. There are only around 60 ventilators, and most are in use for other ailments.

As the virus invaded country after country, many Gazans hoped we would finally enjoy some benefits from the blockade. We have no tourists or cruise ships. Travel is heavily restricted. And Israel and Egypt sealed their borders early on.

But a couple of Palestinians returning from Pakistan tested positive, and now authorities have reported a total of 13 cases. Hamas insists it has isolated all the cases and says the situation is under control. Many Gazans seem to accept that.

On a recent grocery run, I saw streets and markets bustling. Hamas has closed schools, mosques, wedding halls and cafes, but few people appear to be social distancing. We are accustomed to sheltering at home during wars, but Gazans have never faced an enemy like this.

I stocked up on food and cleaning supplies and returned to the farm, where I am isolating with my mother and sister. It’s a pleasant change from the city, where I live in a small apartment and the power is out for more than 10 hours a day.

We awaken to the smell of orange and clementine blossoms from the orchards outside, and songbirds instead of car horns. Nearby, the heavily guarded frontier is quiet. In the pandemic, Israel and Hamas appear to have found a common foe.

Conflict, though, is never far from my mind.

I was born and raised here. I have spent my career reporting on the blockade, the wars and the astonishing resilience of my fellow Gazans.

As tranquil as the farm is now, I cannot forget that it was here where my father, Akram al-Ghoul, was killed. He was a judge with the Western-backed Palestinian Authority and stopped working when Hamas took over. He retired to the farm, where he tended to his flower garden and raised cattle. During the war, he insisted on staying to feed the animals.

On Jan. 3, 2009, an Israeli bomb landed on the farmhouse, killing him and another relative. Human Rights Watch, where I was employed at the time, sent a letter to the Israeli military seeking an explanation. We have yet to receive a response.

Gaza contains many stories like mine. We’ve been trained by hard experience to expect the worst, and we’ve mastered the art of patience along the way. Now, facing a very different threat and waiting here on our farm — this farm that was my father’s — I hope that patience will see us through.