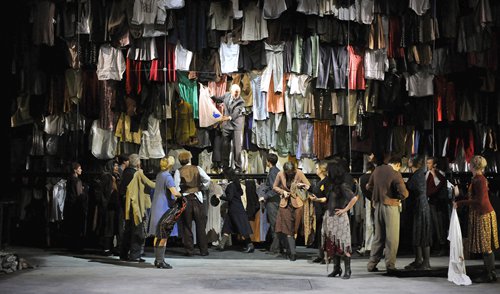 Promotional material for Ghetto (Photo: Courtesy of He Ming)

The Chinese edition of drama Ghetto, directed by Israeli playwright Joshua Sobol, will grace stages in China starting on November 5, the show's Chinese promoter Magnificent Culture announced at a press event on Monday.

Set in the Jewish ghetto of Vilna, Lithuania, in 1942, the play is based on diaries written during the darkest days of the holocaust.

First debuting in Haifa, Israel, in 1984, the play has been staged in 25 countries and regions in more than 20 languages.

The play aims to celebrate the nobility of the human spirit and pay respect to life and the Jewish people's optimism in the face of death.

"It is a play full of hope and respect," Sun Qiang, the lead actor for the Chinese version,  said at the event.

The play will tour a number of Chinese cities including Beijing, Shanghai, Nanjing and Dalian.