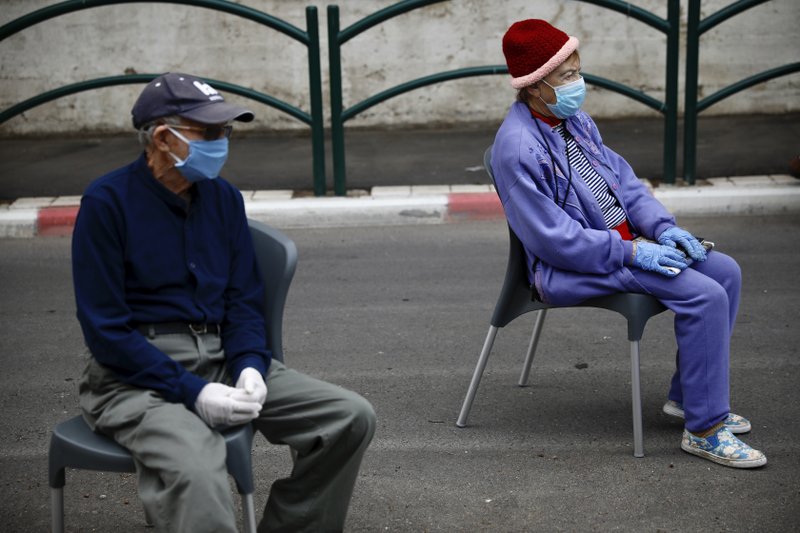 Holocaust survivors Manya Herman, left, and Eliezer Rabinovich wear masks and gloves as they keep a distance while attending an annual Holocaust memorial ceremony held outside this year because of the coronavirus, in the northern Israeli city of Haifa, Israel, Tuesday, April 21, 2020. (Photo: AP)

With the global coronavirus pandemic ravaging the elderly, Israel’s aging population of Holocaust survivors finds itself on the country’s annual Holocaust Remembrance Day this year much like they were during World War II — alone and in fear of the unknown.

Some survivors say the current isolation and sense of danger has triggered difficult memories linked with their wartime experiences. Others bristle at any comparison to their plight during World War II – when the Nazis systematically murdered 6 million Jews.

“One has nothing to do with the other. This could never compare to the five years I went through in the Holocaust,” said Dov Landau, 92, who survived Auschwitz and several other death camps, but lost his entire family. “We can now eat and drink, listen to music and still breathe the fresh air. This is a temporary disease that will pass.”

Holocaust Remembrance Day is one of the most solemn dates on the Israeli calendar. Survivors typically attend remembrance ceremonies, share stories with teenagers and participate in memorial marches at former concentration camps in Europe.

Instead, amid the virus crisis, survivors on Tuesday mostly stayed indoors, in their apartments and nursing homes. The few who ventured outdoors did so wearing protective masks and carefully keeping their distance from others.

The country’s central ceremony, which typically draws thousands to the national Yad Vashem Holocaust memorial alongside Israel’s top leadership, was prerecorded without an audience. With the adjacent museum shut down due to public gathering restrictions, commemorations and exhibits have all shifted online.

A two-minute-long siren at 10 a.m. to remember the Holocaust’s victims typically brings Israeli life to a standstill. Pedestrians stand in place, buses stop on busy streets and cars pull over on major highways — their drivers standing on the roads with their heads bowed.

But this year, the streets are already mostly empty. Cafes and restaurants, which typically shut down for the remembrance day, are already closed. The country has been in near lockdown mode for more than a month trying to staunch the spread of a virus that has killed more than 180 and put a quarter of the country out of work.

There are about 180,000 Holocaust survivors remaining in Israel, and a similar number elsewhere around the world. Israel’s first coronavirus fatality was a man who had escaped the Nazis in World War II, and at least half of the 14 residents who died in a particularly badly infected retirement home in the southern city of Beersheba were Holocaust survivors.

Aviva Blum-Wachs, 87, who survived the Nazi invasion of her native Warsaw, said the hardest part of the current pandemic was being separated from her children, grandchildren, and great-grandchildren. But she said there was no parallel to her wartime trauma experience.

“We were closed in the ghetto. We had no food, no telephone. There was horrible fear of what was outside,” she recalled, from her Jerusalem home. “There is nothing to be afraid of now. We just have to stay home. It’s completely different.”

Yad Vashem has invited the public to take part in its annual victim name-reading ceremony by recording video at home and sharing on its social media platforms.

“Although the circumstances this year are unique, the message is still the same: we will never forget their names,” said Yad Vashem Chairman Avner Shalev.

For the first time, the annual “March of the Living,” which draws youths from around the world to the Auschwitz-Birkenau death camp in southern Poland, has also been called off, and a virtual remembrance launched instead, projecting images of memorial plaques upon the gates of the death camp.

“Physically we may not be there but virtually we are marching on,” said Shmuel Rosenman, the World Chairman of March of the Living. “We will continue to educate the next generation.”

For the frail survivors of the actual genocide, though, these days are mostly focused on surviving the coronavirus.

“We don’t need the corona to remember,” said Zohar Arnon, 92, who lost his parents and two sisters in the Holocaust. “All of us who made it here after ’45 have our baggage. We each have our reasons for having trouble sleeping at night. There are lots of things, besides corona, that bring back the memories.”