It's a man's world: Women scarce in Nobel Prize annals 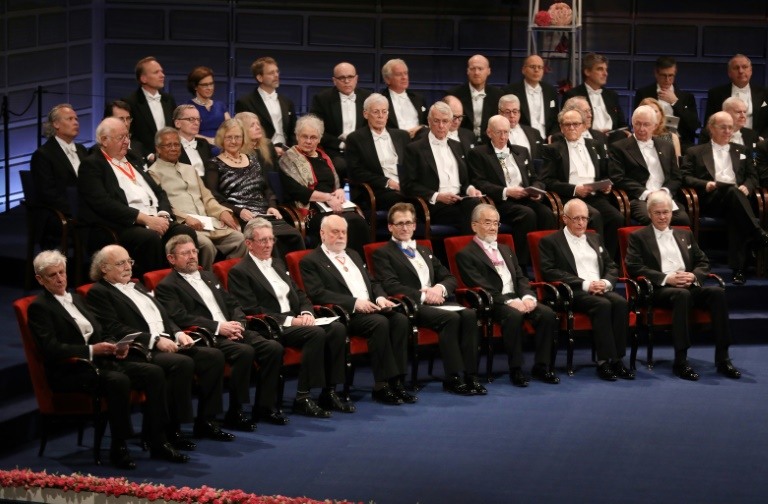 Among Nobel laureates, only five percent of winners have been women through 2017.Photo: AFP

The Nobel Prize statistics are dour reading for women, who've been awarded only one of every 20 prizes. And while the numbers are slowly improving, the December 10 prize ceremony will be an all-male affair for the second straight year.

The Nobel Prizes for medicine, physics, chemistry, literature and economics are awarded in Sweden, and the one for peace in Norway -- two pioneering countries in the area of women's rights who proudly boast of their politics promoting gender equality.

While the number of women Nobel laureates has risen in recent decades -- from just four between 1901, the first year of the prizes, and 1920 to 19 between 2001 and 2017 -- the 48 women crowned over the years represent just five percent of the 896 people honoured, excluding organisations.

The statistics vary depending on the discipline: the economics prize has been by far the most unattainable for women. The literature prize remains largely a male domain, while peace does somewhat better.

Of the five original Nobel Prizes created in the 1895 will of Swedish industrialist and philanthropist Alfred Nobel -- the economics prize was established in 1968 to mark the tricentenary of the Swedish central bank -- those for physics and chemistry are the most "misogynist", having gone to just two and four women, respectively.

Paradoxically, the only woman to have ever won two Nobel Prizes, Marie Curie, was honoured in these two disciplines in 1903 and 1911.

"We are disappointed, looking in a larger perspective, that there aren't more women who've been awarded," admits Goran Hansson, the permanent secretary of the Royal Swedish Academy of Sciences which selects the physics, chemistry and economics laureates.

He insists "there is not any substantial male chauvinism bias in the committees" that choose the winners, four of which (medicine, chemistry, peace and literature) are currently headed by women.

The reason women are so poorly represented in the science fields, he says, is because laboratory doors were closed to women for so long.

Anne L'Huillier, a member of the Swedish Royal Academy of Sciences who sat on the Nobel physics committee in 2010, agrees, noting that of the few women who made it into the labs, even fewer made it to the top of their fields.

"It's totally obvious, especially for hard sciences, perhaps less so for life sciences," she says.

The list of winners of the medicine prize, awarded by the prestigious Karolinska Institute, is indeed a bit more encouraging: 12 women out of 214 laureates, or 5.6 percent.

Meanwhile, the economics prize, as mentioned, ranks at the bottom. Just one woman has received the nod since the prize was first awarded in 1969: Elinor Ostrom of the United States in 2009.

"You noticed, it is right, that we are all white men. We are also all old white men, and all of these projects have been going on for 30 years or longer," the 2017 Nobel economics laureate Richard Thaler said Thursday in Stockholm. 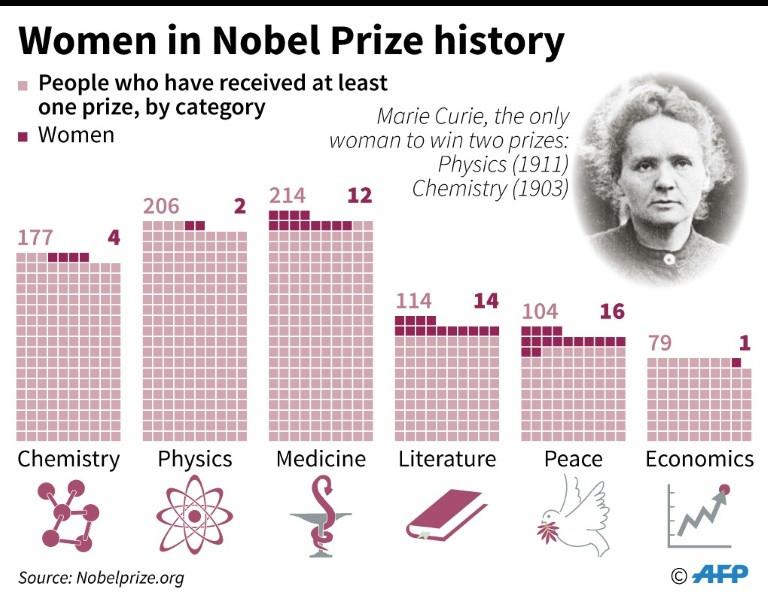 And what about literature? Fourteen writers of the second sex have received the nod, or 12.3 percent of literature laureates. Here however, the trend is improving at a brisker pace: 36 percent of those honoured since 2007 have been women.

"Things are going in the right direction. That is not to say that the statistics can't get better. They can and they will," the permanent secretary of the Swedish Academy that awards the literature prize, Sara Danius, wrote on her blog.

"At the same time, it is worth recalling that the Swedish Academy does not strive to obtain good statistics for the sake of good statistics. The only thing the Academy cares about is quality," wrote Danius.

She has recently been dragged into a scandal after #metoo revelations that the French husband of a Swedish Academy member has been accused of allegedly harassing, assaulting and raping a number of young women.

The peace prize is meanwhile the most favourable to women: 16 women laureates out of 104 people awarded (15.4 percent). But that is still far from parity.

According to Olav Njolstad, the director of the Norwegian Nobel Institute, those numbers reflect "the place of women in society in the 20th century."

But, as with the other prizes, things are slowly improving. Six women have won the peace prize in the past 15 years.

In 2011, the Norwegian Nobel Committee honoured three women for their work on women's rights: Liberian President Ellen Johnson Sirleaf, her fellow Liberian Leymah Gbowee, and Tawakkol Karman of Yemen, a leading figure of the Arab Spring.

The trend reflects the feminisation of the committee that awards the prize.

"In the long run, it's of course important that we have gone from a committee dominated by men to a committee where we are about 50-50 (men/women)," Njolstad said.