Thirty-one celcius in Beijing. The scorching heat kills the desire to go outside. Most people want to hide in an air-conditioned room and sip a cold coke on a hot summer day, but this is not the case for a group of young ambitious golfers. 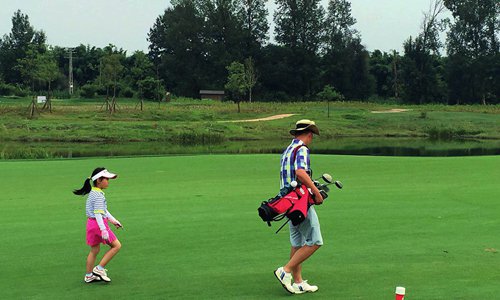 Powering through the high temperatures by focusing on the golf ball, they diligently swing their clubs as they prepare for a big game out on the green at the Topwin Golf and Country Club near Yanqi Lake in northeast Beijing's Huairou district.

"When I hit the golf ball into the hole successfully, I am thrilled. I really enjoy that feeling. I realized that the more I practiced, the happier I became," Fu Hongyu, 11, told Metropolitan.

Unlike his great passion for the sport now, Fu had a pretty bad impression of golf when his parents first took him to the golf course when he was 7.

"The weather was hot in the summer, so I didn't even want to be there. Besides, at that time, I did not know what golf was. Nor did I know how to swing the club to hit the ball. It was just boring," Fu said. But after some practice, the sense of fulfillment set in as he got better at the sport.

Ten-year-old Ma Beika fell in love with the sport at her first practice four years ago. "My daddy took me to the golf course that first time because he knew I was interested after seeing me hit the ball with a plastic club continuously," Ma said. As she grew up, the role golf played in her life gradually turned from a childhood hobby to her favorite sport.

For many children and teenagers like Ma and Fu, the fun of playing golf was not limited to swinging the golf clubs and landing the ball in the hole, but also in walking the course and making friends.

Benefiting from the sport

Known as a game of both the body and mind, of confidence and competence, playing golf has helped young athletes to grow, according to the junior athletes and their parents.

During his four years playing golf, Fu has been to quite a few national golf competitions and accumulated experience. His father, Fu Zhuyi, said that he chose golf because he wanted the boy to possess many of the good qualities a good golfer has.

"He is a very outgoing boy, overly active. I wanted him to be calmer and more determined." Moreover, through learning and making progress with playing golf, this young boy has also become more confident about himself and has made many friends.

"She used to have a weak physique. So I wanted to choose a comparatively less vigorous sport for her to practice so as to let her build up her strength," Qiu said.

As far as Wang herself is concerned, practicing golf makes her better at planning the next move and making decisions on her own.

"If my first swing does not land in an ideal position, I will think hard about how the second swing can turn the tables. This sort of process has made me become more patient," said Wang.

Ye Zhen, 9, said that playing golf allows him to "make a lot of good friends on the course," and helps him to "become more organized" since he has to take care of his equipment all by himself.

Ye won the championship for the U11 group at the HSBC National Junior Golf Championship 6th Stop in Beijing on August 17. The championship is one of the projects of the China Junior Golf Program, jointly launched by the China Golf Association and HSBC, which aims to include not only elite players who compete at a high level but also beginners of the sport.

At present, more and more Chinese teenagers are learning this sport which used to be stereotyped as a sport of the privileged few in the West.

As China's athletes, including Feng Shanshan, enter the world's stage, the sport is growing in popularity in the country. Many parents have come to realize that golf benefits the young players' minds and bodies. They also see the potential of using their kids' golf expertise as a boost when applying for top universities at home and abroad.