It's Toyota v Toyota as dawn breaks in Le Mans 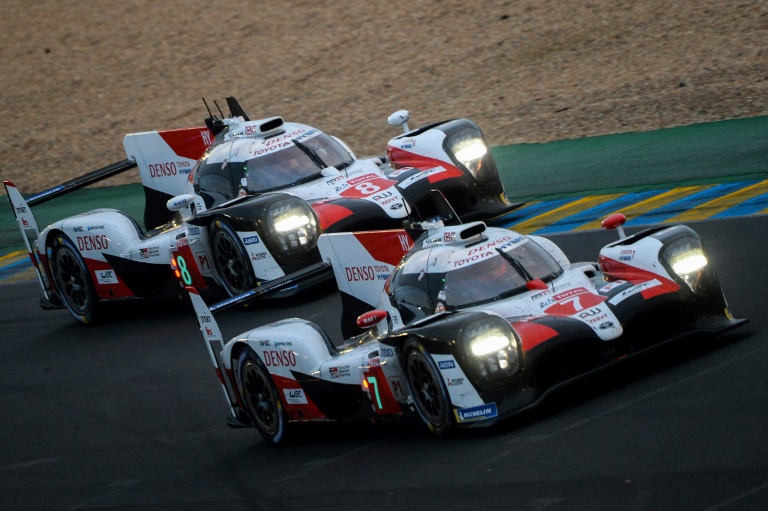 After some 15 hours, they had a lead of just one minute, four seconds over the other Toyota hybrid of Fernando Alonso, Sebastien Buemi and Kazuki Nakajima who triumphed 12 months ago.

Three laps off the pace was the Rebellion of Thomas Laurent, Nathanael Berthon and Gustavo Menezes.

"The gap is relatively small at the moment and many things can happen," said Japan's Nakajima. "There's a long way to go still but I'm happy with how it's gone so far."

Only five of the eight cars in top LMP1 category remained as dawn broke on Sunday.

The SMP Racing car of Stephane Sarrazin, Egor Orudzhev and Sergey Sirotkin was forced to abandon the race at around 2:00 am as it was in third place. With Orudzhev at the wheel, it went off the track and was too damaged to continue.

In total, nine out of the 61 cars that started the race on Saturday were forced to drop out by early Sunday.

Alonso, 37, is signing off on another chapter of his storied career, hoping to add back-to-back Le Mans titles to his two Formula One world championships.

"It's difficult to match the other car on pure pace but we will push. The race is long," said Alonso, who is still in contention for the overall world endurance championship title this season.

A win for the Toyota hybrids is almost certain.

For the last two seasons, they have been the only manufacturer on the grid after Porsche and Audi pulled out of the elite LMP1 class.

Most of the drama in the early hours of the race was down the field.

The Corvette of Swiss driver Marcel Fassler spun after contact with the Porsche of Japan's Satoshi Hoshino who is driving for the team backed by film star Patrick Dempsey.

After two violent clashes with the safety barriers, the Corvette had to be lifted off the circuit by a crane with the crew forced to abandon.