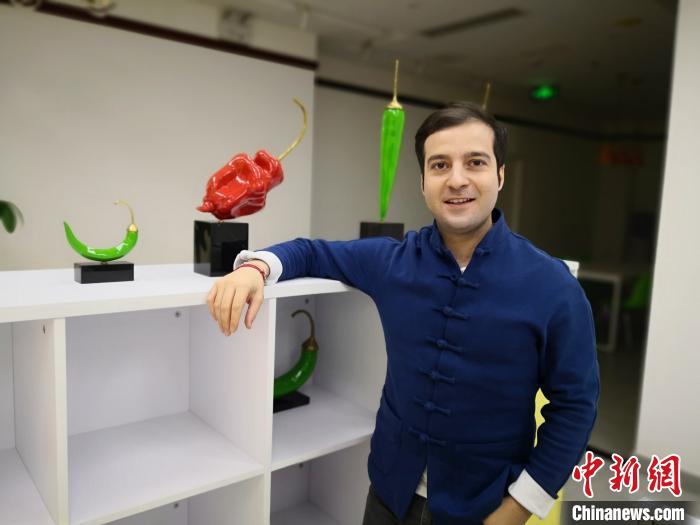 “Chilis are not just a spice, but a borderless tool to enhance cultural communication and exchanges,” according to Gianluca Luisi, an Italian man who runs a chili business in southwest China’s Chongqing municipality.

The 31-year-old man came to China on a three-month backpacking trip 12 years ago, during which he toured the country from Beijing all the way down to Nanning, south China’s Guangxi Zhuang autonomous region.

“I’m closely connected with China, and the longer I stay here, the more I love it, especially its food,” Luisi said.

After this tour, he resumed his college education in the UK and met his wife – who’s from Sichuan, a province neighboring Chongqing, three years later. This international romance prompted him to pursue a career in China.

In 2011, Luisi was admitted into a postgraduate program of international politics and economics at Peking University. After graduating two years later, he joined the Consulate General of Italy in Chongqing.

“I really wanted to work as a diplomat, because I wanted to contribute to the friendship between China and Italy,” he said. It was during his stay in Chongqing that Luisi developed a love for chili – an ingredient that always appears in Chinese hot pot.

In 2017, he decided to quit his job and run a chili business. “I gradually understood what I wanted, as I love Chinese food culture and hoped to promote it worldwide,” he explained. In the same year, he married his wife.

Luisi believes Chinese cuisine is not just about dishes, but a culture. “We must find a point of penetration to promote Chinese food culture to the world, and chili is perfect,” he noted.

Later, he settled in Sichuan’s capital Chengdu with his wife and opened ChinItaly, a firm that sells chili-themed cultural creative products, such as silk scarves, ties, paintings and sculptures. In addition, he has also developed a chili sauce aimed at foreigners’ tastes.

His chili sauce is mainly exported to overseas Chinese supermarkets, while the cultural creative products are sold in China.

Luisi said that chili just represents the beginning of his efforts to promote Chinese food culture, and he is planning to expand his product line to better achieve this goal.