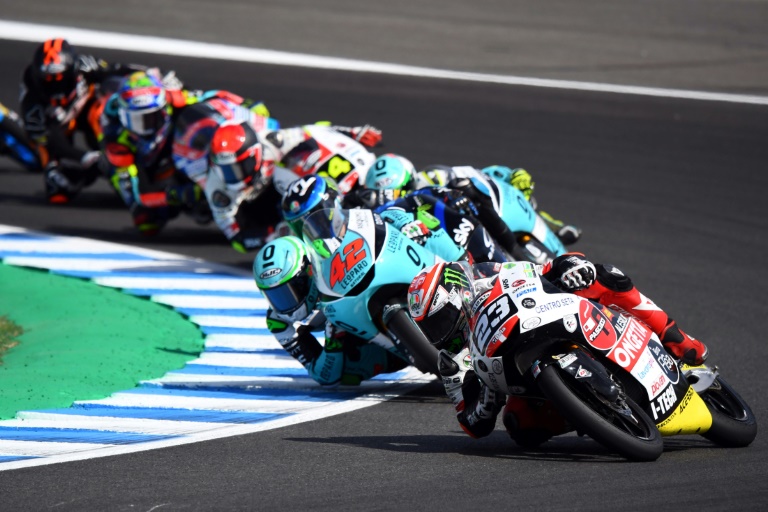 Niccolo Antonelli edged a tightly-bunched pack to win in Jerez on May 4, 2019. (Photo: AFP)

Italy's Lorenzo Baldassari on a Kalex won his third GP of the season Sunday when dominating the field at Jerez to extend his world championships lead.

The 22-year-old won at Qatar and Argentina before falling last time out in the United States, making up for that slip as he rampaged around the Jerez de la Frontera track to beat Spanish pair Jorge Navarro and Augusto Fernandez.

"I did a great job, the team worked well but this win is also for me," Baldarassi said.

The race was marked by an early accident when Australia's Remy Gardner ran into Alex Marquez, brother of Marc Marquez, and needed treatment on the track before being hauled away, Marquez eventually finishing sixth.

They were followed home by two KTM riders with Celestino Vietti third and Spaniard Aron Canet fourth, which was enough to take the lead in the overall standings.

"I feel fantastic," said Antonelli at the finish.

Suzuki led for much of the race at the head of a tightly-bunched pack but after Antonelli overtook in the closing laps, the Japanese rider had to fight to hold off Vietti.