CULTURE Jack Ma says movies should be made with passion

Jack Ma says movies should be made with passion 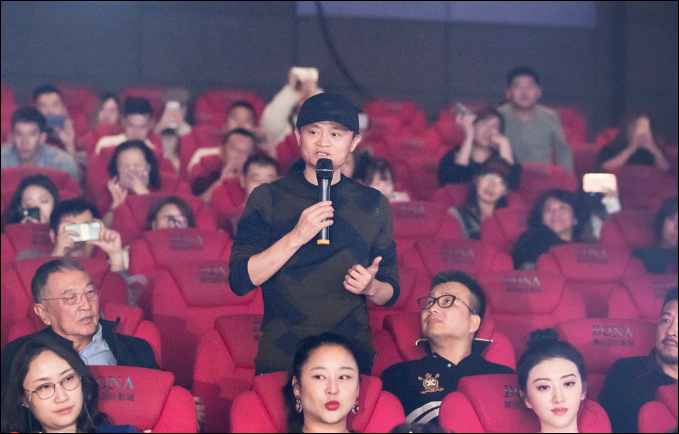 Jack Ma, chairman of Alibaba Group, speaks after watching Green Book with some of his friends in a Beijing cinema on Feb 25, 2019. (Photo: IC)

With Green Book winning best picture at the 91st Academy Awards ceremony, its co-producer Alibaba Pictures Group, the movie unit of the world's largest e-commerce company, claimed to be the first internet film company to co-produce an Oscars winning movie.

Jack Ma, chairman of Alibaba Group, said a good movie does not necessarily have to cost a lot, nor tell an earth-shattering story, according to the Paper, which also said Ma watchedGreen Book with some of his friends, including Chinese computer giant Lenovo Founder Liu Chuanzhi and Chinese studio Bona President Yu Dong in a Beijing cinema on Monday, though the film will not be officially screened in China until March 1.

He said a good movie is the one which is made with passion and can bring positive things to the society. Ma said he has seen the film, a road trip drama based on a true story in segregation era, three times, and in his view, a Chinese movie is actually not far from an Oscars award.

An announcement by Alibaba Pictures said the Beijing-based company decided to invest in Green Book in July, as the decision-makers were attracted by its heartwarming theme, positive values and quality narrative.

Following the decision, the Paper said, Alibaba Pictures recommended the film to Huaxia Film Distribution, and both sides agreed to introduce Green Book to Chinese audience.

Only four days after the film was announced, Chinese audience could watch it in the nearby theaters. Yu said after watching Green Book on Monday that the cooperation between Alibaba Pictures and Huaxia Film Distribution makes the fastest release in China for an imported movie, which is also attributed to the country's reform and opening-up.

As of the publication time, Alibaba Pictures shares increased 1.39 percent to HK$1.46 on Tuesday in Hong Kong.