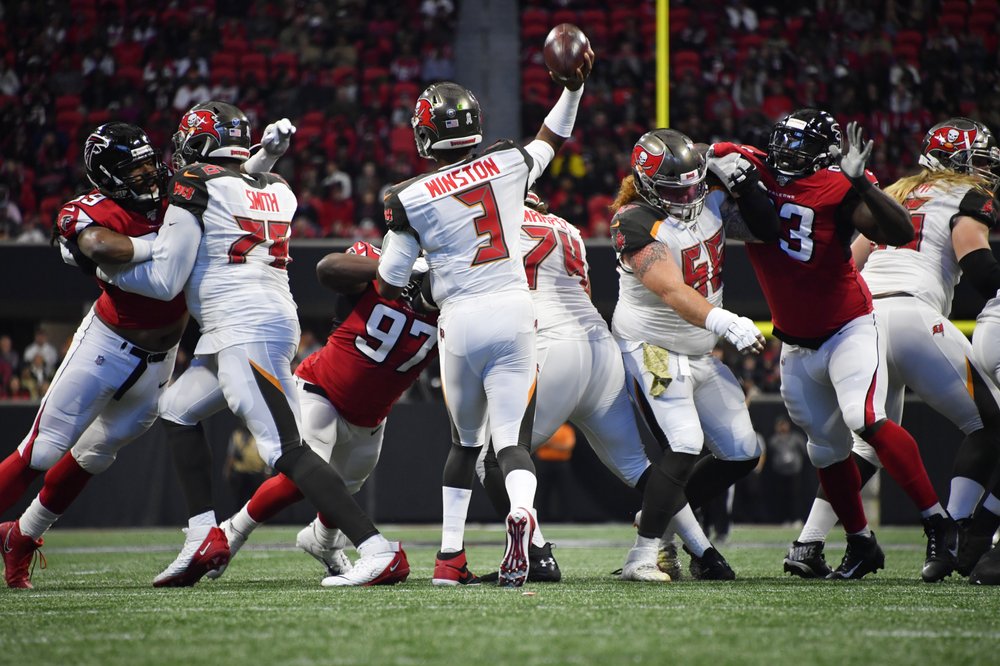 Tampa Bay Buccaneers quarterback Jameis Winston (3) works in the pocket against the Atlanta Falcons during the first half of an NFL football game, Sunday, Nov. 24, 2019, in Atlanta. (Photo: AP)

It’s been an all or nothing kind of year so far for Jameis Winston.

Tampa Bay’s quarterback has thrown 20 interceptions and 22 touchdowns so far this season, joining Cleveland’s Brian Sipe in 1979 as the only quarterbacks to reach the 20-20 club in the first 11 games.

Winston’s 24 turnovers overall are the most in the league after 11 games since Drew Bledsoe had that many in 1994 for New England.

Along with all those mistakes has come plenty of big plays as Winston is also second in the league with 3,391 yards passing. The recipients of many of those good plays have been receivers Chris Godwin and Mike Evans.

They each have three games with at least 150 yards receiving this season after Godwin did it on Sunday against Atlanta, becoming the first set of teammates to do that in a single season in NFL history.

New England, Baltimore, and San Francisco are off to impressive starts this season, with all three outscoring the opposition by more than 15 points a game. There has never been a year since the merger when even two teams had done that through 11 games before this year. The 11 teams that had done it had plenty of postseason success, with eight winning the Super Bowl, two losing it and the 2005 Colts falling in the division round to Pittsburgh.

The Ravens scored touchdowns on their first six drives on Monday night against the Rams, becoming the fourth team to do that since 2000. The others were New Orleans against Detroit (Dec. 21, 2008), Minnesota against Detroit (Dec. 2, 2007) and New England against Buffalo (Nov. 18, 2007). The Patriots actually did it on their first seven drives that game.

The Patriots are assured of their 17th straight 10-win season, breaking a tie with San Francisco (1983-98) for the most consecutive 10-win seasons in NFL history.

Saints receiver Michael Thomas had 10 catches for 101 yards and a TD last week, becoming the fourth player to record at least eight catches and 100 yards receiving in five straight games in a single season.

The Packers punt return game is going nowhere. Green Bay has lost 11 yards on the season while returning punts, on pace for the worst mark in NFL history. The lowest mark on record for a season is 27 yards for the Cardinals in 1965.

Ryan Tannehill didn’t even have a starting job to start the season but he has moved Tennessee into playoff contention. Tannehill went 14 for 18 for 259 yards and two TDs last week against Jacksonville for a 155.8 rating. It is the fourth time in the past five years that Tannehill has posted a rating of at least 150 in a game, tying Kirk Cousins for the most in the NFL in that span.

The Lions (3-7-1) became the third team in NFL history to hold a lead at some point in each of the first 11 games of the season and win three or fewer, joining the 1987 Giants and 2004 Chiefs. Detroit hasn’t blown the most leads, however. The winless Bengals have led in eight of 11 games, tying for the most blown leads through 11 games since the merger.