"Aquaman," by Warner Bros. Pictures and DC Comics, debuted in China two weeks ahead of its American release and raked in a monstrous 650 million yuan at the box office ($94.5 million). The movie enjoyed an incredible 85 percent market share on Friday, as well as becoming the studio's largest ever opening weekend in China. Perhaps most impressively, the film also became the largest box office opening ever for the month of December, according to BoxofficeMojo.com. Chinese box office analysts predict the film could make as much as 1.5 billion to 2 billion yuan in the Chinese domestic market alone.

In addition to tremendous financial success, the film also received rave reviews from audiences and critics alike. After 152,000 votes, the film's rating on Douban.com stood at an outstanding 8.1/10. The film is a huge boost for the DC Comic Extended Universe, after both "Batman v Superman: Dawn of Justice," and "Justice League" failed to live up to expectations.

The spectacular city of Atlantis.

Many have praised the film as the underwater cousin of "Star Wars" and "The Lord of Rings." However, the film bears distinctive trademarks from Wan's Chinese heritage, and seemingly borrows elements from China's ancient classic novel "Journey to the West."

In an interview with China.org.cn at the Chinese premier, Wan told us, "I am of Chinese descent, so I have heard many Chinese stories as I grew up. I have always liked 'Journey to the West' and "The Monkey King" and was influenced by these Chinese elements when I was filming." Wang is reportedly considering making a feature about the Monkey King.

Aquaman, first created by Paul Norris and Mort Weisinger, debuted in More Fun Comics #73 (November 1941). The current iteration of the character, played by Jason Momoa, first appeared in "Justice League" last year, amongst a crowded selection of fellow superheroes. In this movie, Momoa gets the chance to add unique depth to the role. His long hair, muscles, tattoos and leather pants are pure rock and roll, but Momoa seamlessly blends such aesthetics with a sense of responsibility, courage and humor.

Born in Hawaii, surrounded by the sea, Jason Momoa has a deep love for the oceans. He even studied marine biology at Iowa University. "I used to think about doing something for marine biology and creatures in the future," Momoa laughed when he was interviewed in China on Nov. 18.

Nicole Kidman as Atlanna, The Queen of Atlantis, mother of Arthur Curry and Orm.

However, filming underwater was a challenge even for Momoa. "Underwater shooting is indeed a challenge," James Wan admitted. "It's hard to shoot and it's hard to make it happen. I also feel for these actors who were working very hard in such an environment."

However, according to Momoa, the biggest challenge was to "try and not get hurt every day!" He received high-intensity stunt training for four and a half months, and learnt an array of skills including judo, jiu-jitsu and Chinese martial arts. According to him, he performed more stunts and actions for "Aquaman" than for his entire career. His co-star, Amber Heard, also had a lot of action scenes to shoot. "We had to do a lot of training. This film required us to work very hard, physically and mentally," she added. 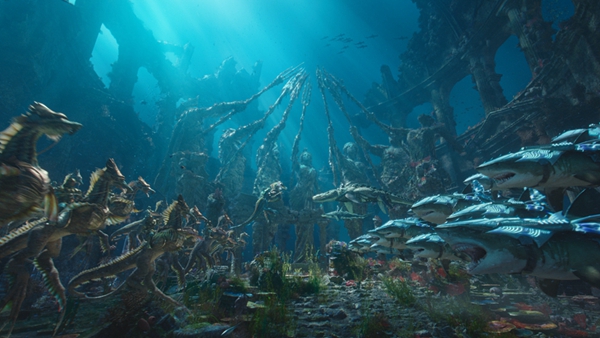 A still shows magnificent statues and creatures in an undersea scene.

The brilliant acting is complimented by a rich world. In order to create the magnificent underwater world, the production team built more than 50 filming sets, and combined them with advanced blue screen shooting. The result is a wonderful fusion of ancient Roman architecture and digital sci-fi scenes, populated by uniquely designed sea creatures and monsters. Wan even manages to hark back to his earlier horror movies such as "Saw" (2004) with the terrifying amphibious monsters known as The Trench.

Wan's story-telling expertise is on full display with film seamlessly blending deep character development, incredible stunts, and the rich history of Atlantis and the surrounding political turmoil of the Seven Nations. 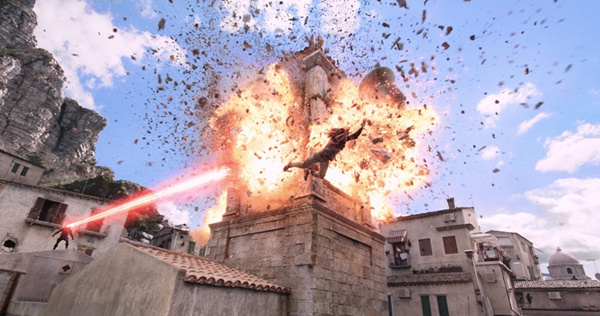 An exciting action scene from "Aquaman."

At the Chinese premiere, Jason Momoa asserted that, "James Wan is making history!" With the film's phenomenal success in China, it certainly seems that way so far. 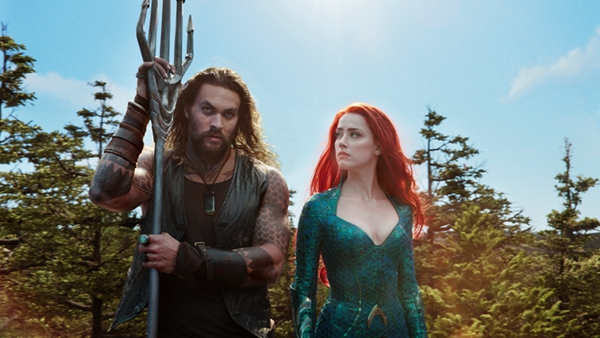 Arthur Curry and Mera, who have plenty of romantic chemistry in the film.