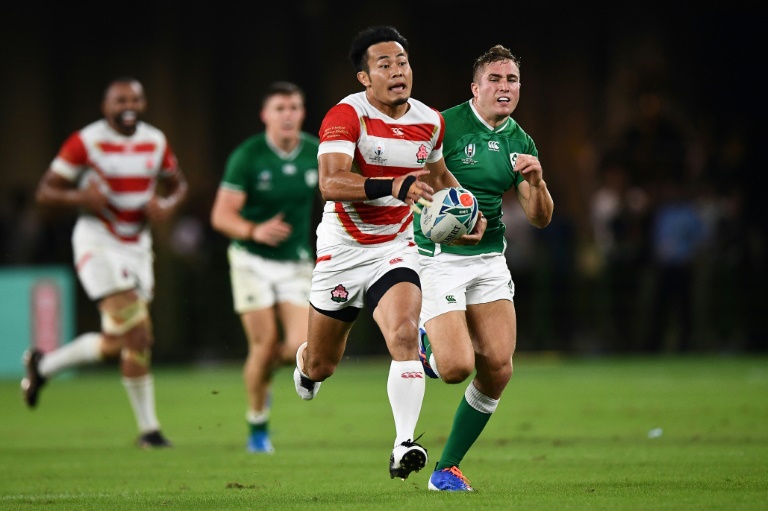 Kenki Fukuoka sent the country into rapture with his winning try against Ireland. (Photo: AFP)

For Japan coach Jamie Joseph, the host nation's colossal 19-12 Rugby World Cup win over Ireland was a textbook example of keeping up with the Jones's.

Four years ago, the Brave Blossoms pulled off one of sport's greatest shocks with a breathless 34-32 upset of two-time world champions South Africa on England's south coast.

Eddie Jones, architect of the "Brighton Miracle" as it came to be known, had taken Japan from "joke team" -- in the Australian's own words -- to giant-killers.

But Joseph's Japan could go a step further and reach the quarter-finals for the first time after an astonishing performance against Ireland, who came into the World Cup as the top-ranked team in the world.

"We obviously had a plan and we executed it."

It won't have made comfortable viewing for Scotland, who were battered 27-3 by Ireland in their opening game and face the Japanese in a potential winner-takes-all clash at Yokohama a little over two weeks from now.

"They were just kicking it. Every one of the players made our tackles, so we felt in control."

The way Japan hit back after tries from Garry Ringrose and Rob Kearney inside 20 minutes -- from fly-half Yu Tamura's cool kicking to a dazzling try from Kenki Fukuoka that put the home side in front just before the hour mark -- almost defied logic.

No longer able to rely on the element of surprise after humiliating the Springboks in 2015, Japan played with a real swagger in possession and displayed tenacious defence to see the game out.

"It's not just about South Africa -- we've shown that nothing is impossible."

"Japan played an incredible brand of rugby," he said. "From the start there was wave after wave of constant pressure."

Japan will be expected to beat Samoa next weekend before the crunch game against Scotland.

But regular captain Michael Leitch, who came off the bench to ignite Japan on Saturday, insisted the Brave Blossoms still had a job to do, noting they won three games at the last World Cup and still failed to reach the last eight.

Telling in the build-up to a game Japan were given little chance of winning, however, was the relaxed demeanour of the players.

Assistant coach Tony Brown was also spotted on the eve of the game drinking a beer outside a pub in the city of Hamamatsu, posing for photos with Japan fans.

But the Japan players were all business after allowing themselves a cheeky beer in the locker room to toast their monumental victory.

"We are all ecstatic," said lock James Moore. "But it doesn't mean anything if we don't play well against Samoa next week."