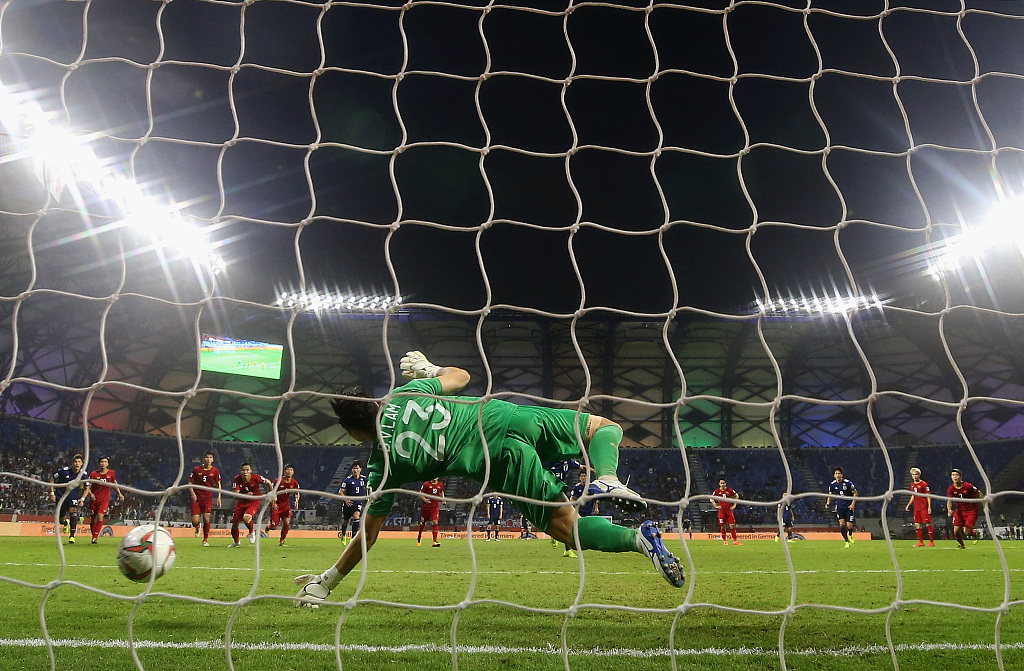 Dang Van Lam of Vietnam dives in vain to stop Ritsu Doan of Japan scoring his sides first goal from the penalty spot during the AFC Asian Cup quarter final match between Vietnam and Japan at Al Maktoum Stadium on Thursday. (Photo:VCG)

As VAR made an eventful Asian Cup debut, Maya Yoshida had a headed goal ruled out on review before Doan was adjudged to have been fouled in the box by B.T. Dung.

The Dutch-based midfielder rolled in the penalty on 57 minutes for a deserved win for the four-time champions, who were repeatedly denied by inspired goalkeeper Dang Van Lam.

Hajime Moriyasu's Blue Samurai will now play either China or Iran in the semis as they bid for a record-extending fifth title, and their first since 2011.

Lam saved brilliantly from Takehiro Tomiyasu's header and tipped Takumi Minamino's point-blank shot over the bar in an engrossing first half where VAR intervened after 24 minutes.

UAE referee Mohammed Abdulla Hassan blew for Yoshida's goal from a corner before replays showed that the ball came off the Southampton defender's arm.

Lam denied Wataru Endo early in the second half before VAR had another say, this time in Japan's favour when Doan went down under Dung's challenge and replays showed contact.

As Vietnam strived to hit back, Phong Hong Duy went close with a shot from distance and Lam kept them in it with another miraculous stop, this time from Minamino.

But there was no coming back for the Southeast Asian champions, whose only other foray to the quarter-finals was in 2007 when they lost to eventual winners Iraq.

VAR is being used for the first time at the Asian Cup from the quarter-finals onwards. China are playing Iran later on Thursday before South Korea face Qatar and UAE play holders Australia on Friday.