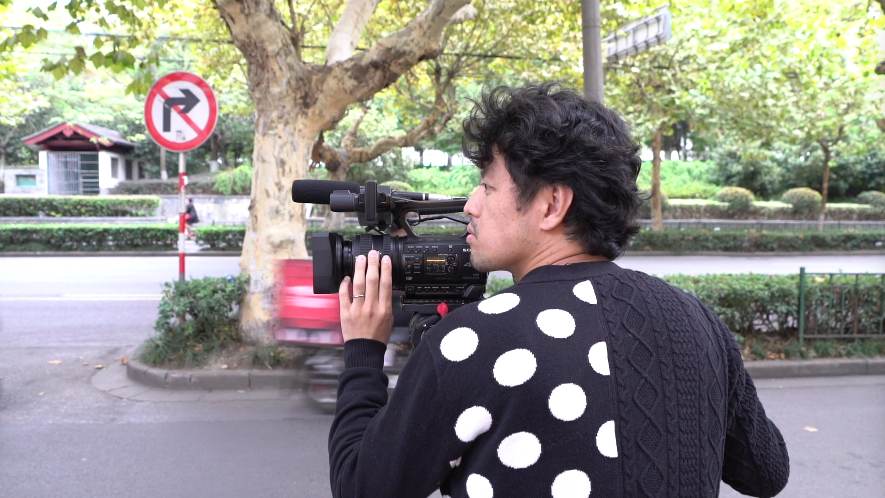 A small film called "The Reason I Live Here" has attracted the widespread attention of Chinese netizens.

Reason? It documents exceptional stories of Japanese people living in China and the Chinese living in Japan.

Takeuchi Ryo, a Japanese director who himself lives in Nanjing City, eastern China's Jiangsu Province, told CGTN that he wanted people to know more about Japan and put an end to some stereotypes attached to Japan.

He said that the idea of portraying Japan in this way came from his Chinese wife, Zhao Ping, who's also his producer.

"In 2015, many Chinese people visited Japan for sightseeing, they came back with a growing interest in Japanese culture. That's when we started," said Zhao.

In 2013, the couple came to settle down in Nanjing, giving up everything they had in Japan, including their jobs and a house to chase their dreams.

Takeuchi told CGTN that his interest in China started growing when he first met his wife. Gradually, he started dreaming about making films with a focus on the Chinese audience.

"Initially, she was my motivation to learn Chinese history and Mandarin. Then it was through sheer eagerness that I wanted to know more about China because it's so interesting," said Takeuchi.

After living in Nanjing for years, Takeuchi speaks fluent Mandarin and behaves like a local Chinese. He rides shared bikes to work and orders silk noodles soup.

He enjoys living here, not just for his work and family, but he also likes the local Chinese who are quite rational towards history.

In fact, his family and friends were extremely worried when he decided to settle down in Nanjing, a city which may not seem too kind on Japanese people for historical reasons.

Contrary to his family's concerns, Takeuchi told CGTN that he and his family never experienced any unfair treatment in China.

Now, he said that his target audience also includes Japanese viewers and he plans to spread China's culture in Japan.

"Most Japanese don't have a clear idea of China, I don't like that, a two-way understanding would be better," said Takeuchi.

His 136-episode documentary "The Reason I Live Here" has become one of the most popular videos on YouTube with a whopping 478,206 views.