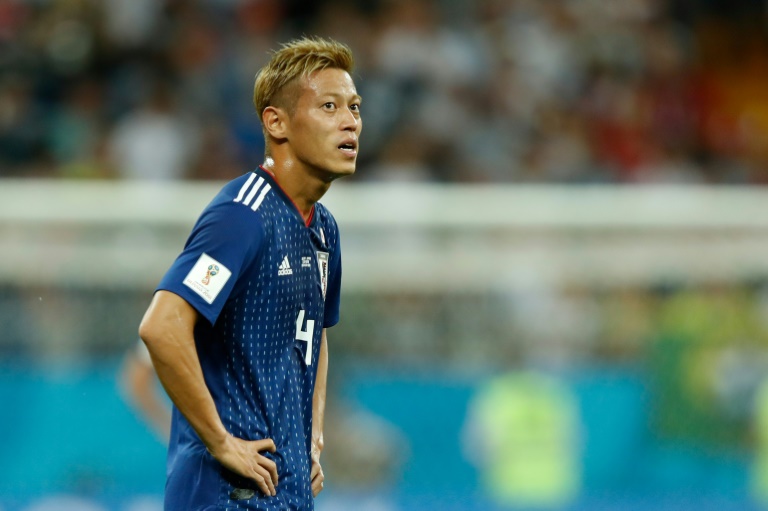 Keisuke Honda has launched a venture fund to "contribute to people in disadvantaged environments" (Photo: AFP)

The Dreamers Fund, set up in April in Los Angeles, aims to raise about $100 million from investors, with Japanese brokerage giant Nomura Holdings serving as "the anchor investor", Honda's management firm KSK Group said in a statement.

"I hope to change the lives of people in the US, Japan and the world for the better through the Dreamers Fund," Honda was quoted as saying in the statement.

The former AC Milan striker announced his retirement from international football earlier this month on the heels of Japan's heartbreaking World Cup exit in a last-gasp defeat to Belgium.

"I'll be taking on a difficult new challenge," Honda, 32, said on his official Twitter account Wednesday, without adding details.

The management firm statement said Honda had been "shocked", while playing club football in the Netherlands a decade ago, to learn that some of his fellow players were sending more than half their salaries home to support families in Africa and South America.

"I began to think about a way for me to contribute to people in disadvantaged environments," Honda said in the statement.

The fund will bring together investors with experience funding rising US ventures such as Uber and SpaceX, the statement said.

"By investing in the Dreamers Fund, Nomura will gain access to information on cutting-edge businesses in the US and expand the scope of business opportunities," a spokesman for Nomura Holdings told AFP.

There was no detail on how much money Nomura would be putting into the fund.

It is unclear when Honda and Smith made the decision to go into business, but the Hollywood actor last week singled out the Japanese footballer as one of the "coolest players" at the 2018 World Cup in Russia.

After identifying Cristiano Ronaldo as top of his list, Smith said Honda was also one of his favourites, according to Kyodo News.

"You know who else I like? Keisuke Honda. We have a little bit of a relationship. Keisuke is the truth," Smith said at a press conference at Moscow's Luzhniki Stadium ahead of Sunday's World Cup closing ceremony, Kyodo said.

"I like his heart. He is a really authentic, good dude," said the two-time Academy Award nominee.