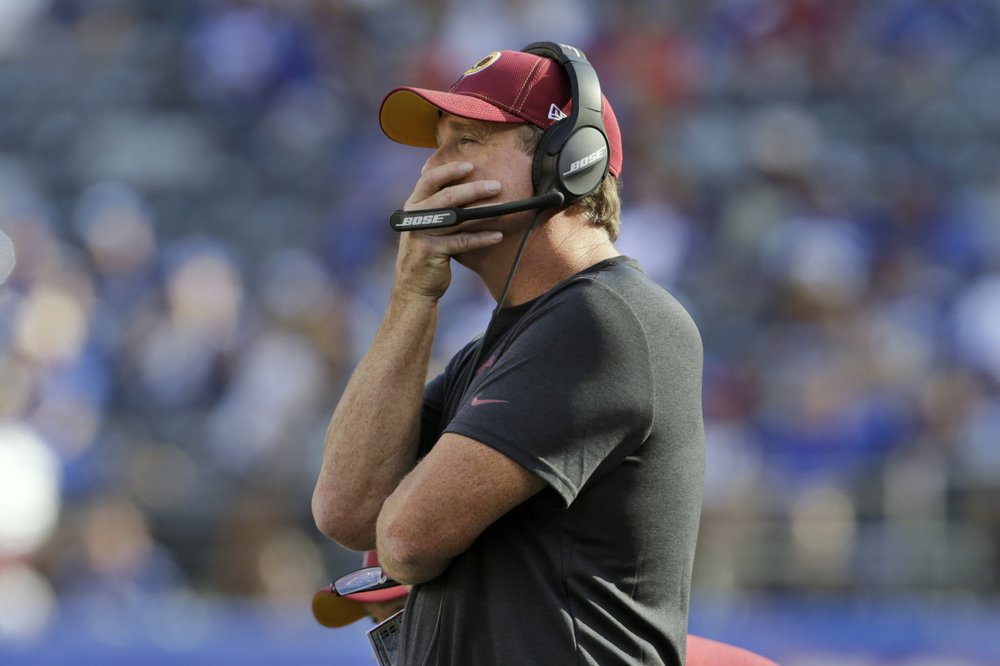 Washington Redskins head coach Jay Gruden watches the game against the New York Giants during the second half of an NFL football game, in East Rutherford, N.J., September 29, 2019.  The Giants defeated the Redskins 24-3. Gruden was fired as head coach of the Washington Redskins on October 7, 2019, after an 0-5 start to the sixth season of a tenure that featured only one playoff appearance. (Photo: AP)

Jay Gruden was fired as head coach of the Washington Redskins on Monday after an 0-5 start to the sixth season of a tenure that featured only one playoff appearance.

The Redskins have gone 35-49-1 overall under Gruden, whose brother, Jon, coaches the Oakland Raiders.

A person familiar with the team’s plans told The Associated Press that offensive line coach Bill Callahan would replace Gruden on an interim basis. Callahan has coached the Raiders in the NFL and Nebraska in college football.

Owner Daniel Snyder and team president Bruce Allen informed Gruden he was out early Monday morning, a day after a 33-7 loss to the New England Patriots. Allen was scheduled to make a rare appearance at a news conference Monday afternoon.

The statement announcing that Gruden would no longer be the head coach said: “Through the first five games of the 2019 season, the team has clearly not performed up to expectations, and we all share in that responsibility. Moving forward we are committed to doing all that we can collectively as an organization to turn things around and give our Redskins fans and alumni a team they can be proud of in 2019 and beyond.”

After the home loss to New England, Gruden was asked if he knew where he stood with the Redskins.

“Nobody’s told me anything, and I don’t have a concern. I’ll just wait and see,” said Gruden, whose contract ran through next season. ”(If) my key works on Monday, keep working.”

This season alone has seen star left tackle Trent Williams hold out, a shuffle at quarterback after Dwayne Haskins was taken No. 15 overall in the draft, a series of injuries up and down the roster — and, perhaps most upsetting to team leadership, increasingly large contingents of visiting fans attending games at Washington’s home stadium.

The Redskins rarely have even been competitive this season, ranking 30th out of 32 NFL clubs in both scoring, averaging 14.6 points, and defense, allowing 30.2 points per game. The only club that ranks worse than Washington in both categories — the Miami Dolphins, who are 0-4 and had a bye this week — will host the Redskins next Sunday.

Cornerback Quinton Dunbar wrote on Instagram that he owes Gruden “for life” for helping him by switching him from wide receiver after college and added: “Sorry we couldn’t get the job done for you.”

Gruden initially was hired by Washington in the hopes that he could help Robert Griffin III develop into a star quarterback, but that forced partnership quickly soured.

And while Gruden had some success drawing up and calling creative plays for Washington’s offense, his area of expertise, he never seemed to get a feel for other aspects of the job.

Despite never before being a head coach in the NFL, and despite never winning more than nine games in a season, Gruden managed to stick around longer than anyone else who’s held that job for the Redskins during Snyder’s unsuccessful two-decade stint as team owner.

Gruden’s teams finished with winning records just twice — 9-7 in 2015, then 8-7-1 in 2016 — and he took the Redskins to one playoff game, a loss. The team went 7-9 in each of the past two seasons, leading to speculation about whether he would be back.

Those questions about his job status reached a crescendo with the terrible start to this season, which has been a mess on and off the field for a franchise that won three Super Bowls under previous owner Jack Kent Cooke but has been in disarray throughout Snyder’s stewardship, including the last 10 years with right-hand man Allen running things as general manager and now president.