CULTURE Jimmie Johnson gears for another milestone with 600th start

Jimmie Johnson gears for another milestone with 600th start 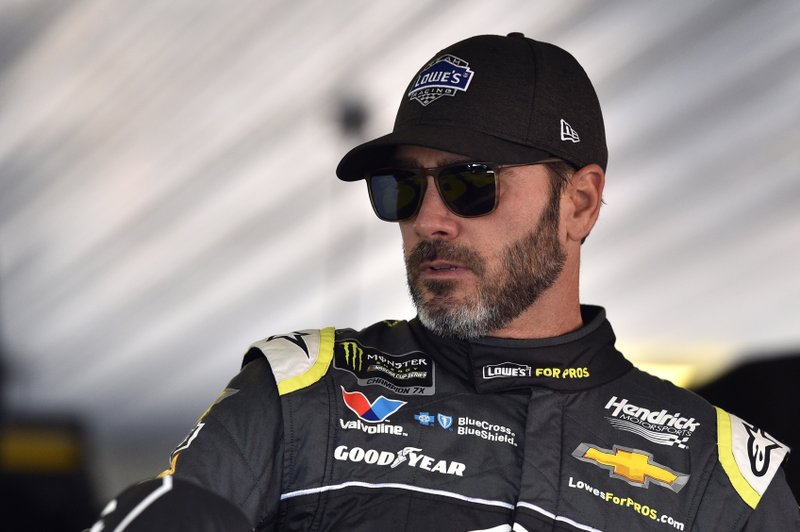 Jimmie Johnson had been plucked from NASCAR’s farm system to drive for owner Rick Hendrick with a resume so ordinary the team wondered if it made the right call on the California kid.

Until Johnson could join Hendrick Motorsports in late 2001, he plodded along for a second-tier team on the brink of closing and had flashed just the occasional spark of future stardom.

His early 2001 results hardly seemed worthy of a teammate about to be paired with NASCAR champion Jeff Gordon.

“The real concern was, had we made a good decision?” Hendrick mainstay Ken Howes said.

Howes, who has spent more than three decades at Hendrick Motorsports, had worked as a crew chief and was assigned to help the rookie driver with his learning curve at the elite Cup level. Johnson went out for a test session in one of Gordon’s Chevrolets and found the power in a car that suited his driving style and humbled the doubters in his camp.

“I came home and reported back and said, ‘Guys, stop worrying. It’s going to be OK,’” Howes said.

Just a few months later, Johnson was set for his Cup debut.

Johnson made his first career Cup start on Oct. 7, 2001 at Charlotte Motor Speedway and on Sunday he’ll earn one more slice of NASCAR history when he becomes the 30th driver to make 600 career starts.

Over the first 599 starts, he has blazed through a career that stamps him on the short list of all-time greats: Johnson has a record-tying seven championship, 83 wins, 35 poles, 224 top-five finishes and 348 top-10s.

“If anybody stood up at that time stood up and said, ‘Hey, this guy’s going to win seven championships,’ they’d probably send you to a drug test,” Howes said. “Your hope was that he had talent, he would gain experience and go on to become a good competitive driver. Win some races each year and kind of start there. Perhaps challenge for a championship.”

Through a confluence of events for Johnson that included a bold meeting with Gordon and splendid timing once Hendrick decided to expand four cars, he was the chosen one at HMS despite one win in 72 career starts with Herzog Motorsports.

“I was in my own weird mental space of wondering if I was ready for Cup or not,” Johnson said.

With Howes as crew chief, Johnson got a test run for three races in 2001.

He raced with a heavy heart in his debut in the wake of the death of his best friend, fellow racer Blaise Alexander. Alexander was killed that weekend in an ARCA race. What should have been a complete celebration, instead turned into a period of mourning. Johnson has honored his friend with a decal of Alexander’s initials on the back of his Chevy.

As Johnson pulled off pit road, the “this is it” moment hit him as he was surrounded by NASCAR greats that included Dale Jarrett, Rusty Wallace and Mark Martin.

Johnson had one mild concern — not to wreck Gordon

“One thing I was instructed to do was not interfere with Jeff Gordon or get in his way at all,” Johnson said, chuckling. “We’re in the race. They’re coming to lap me and I spun out directly in front of Jeff. All I could see was that flaming orange hood that he had on his car missing me by a couple of inches. I damn near took him out.”

Gordon would win his fourth and final championship in 2001. Johnson finished 39th, 25th and 29th in his brief stint under Howes.

“He told me, ‘We’re just running three races. When you have your real team, your full team around you, I promise everything is going to be just fine,’” Johnson said.

Johnson was paired with crew chief Chad Knaus in 2002 and they won the pole for the Daytona 500. The 48 team won for the first time nine races later on April 28, 2002 at Fontana.

“Winning that first race, I could finally take a deep breath and be like, OK, I’m going to be here for a little while,” Johnson said.

The relationship has thrived at a Hall of Fame level to this day — even through some precarious times — and Knaus recently signed a two-year contract extension.

It’s easy to spot when most athletes are finished. The fastball doesn’t pop in the 90s anymore. The knees are shot on the 30-something running back. But the decline is harder to gauge to the naked eye in racing. The results and lap times don’t necessarily tell the complete story on an aging driver.

The 42-year-old Johnson has slogged through the worst season of his 17-year career. He’s yet to win a race and has only two top-five finishes in 20 starts. But Hendrick Motorsports — Johnson, Alex Bowman, William Byron and Chase Elliott — just hit an ignominious milestone: One year since any HMS driver won a race. A chunk of the blame lands at the wheels of Chevrolet, which unveiled a Camaro clearly not ready to race with the big boys at Toyota. Chevy has just one victory this season.

“It’s hard to just pin it on the body itself,” Johnson said. “We know from an engine standpoint and also from a chassis standpoint there’s lot of things to do. I don’t think it’s all in one spot. But aero’s king, especially at the speeds we run.”

Howes said the Camaro had its challenges.

“The short version is, it just wasn’t what we thought it was going to be,” Howes said. “Jimmie is not having a very good year. I just put it back on us. I think way too much of him. He’s still young enough, he’s fit enough, he still has the energy and the want-to.”

Johnson, married and with two young daughters, has remained encouraged that the 48 team can turn the season around.

“I still love to compete, I still love the process,” Johnson said. “That’s how I keep showing up each week optimistic and excited and bring everything I can to the team. But age has brought perspective. I look back on those young years and realize, wow that was just a really special place and time and I hope I can recreate it once again.”

If he can reclaim his spot atop the standings beyond this season, it will come without career sponsor Lowe’s on the hood. Johnson has placed calls and sat in pitch meetings for potential sponsors to replace the departing corporate giant but nothing firm has materialized.

He’s not ready to retire, though he’s intrigued by the idea of joining former teammates Gordon and Dale Earnhardt Jr. in the broadcast booth.

“There’s a lot of other racing I want to do. I want to get back into some off those off-road vehicles I used to race. Sports car racing,” he said. “I don’t know where it would take me. The booth is an option.”

Johnson, mired in the longest losing streak of his career, will call the shots on retirement.

He’s focused this weekend on winning at Pocono Raceway and joining Richard Petty as the only drivers to win in his 600th start.

“That’s in the window. That’s a possibility, for sure,” Johnson said.

He paused and asked about the record for concurrent starts.

“I think that’s safe,” he said, laughing. “I don’t have seven more years.”

But there’s a 600th start in sight, a drive toward a record eighth title that fuels him, and more time to show his critics there’s again no reason to worry about Jimmie Johnson.