Jobless fret as rent comes due again amid virus outbreak 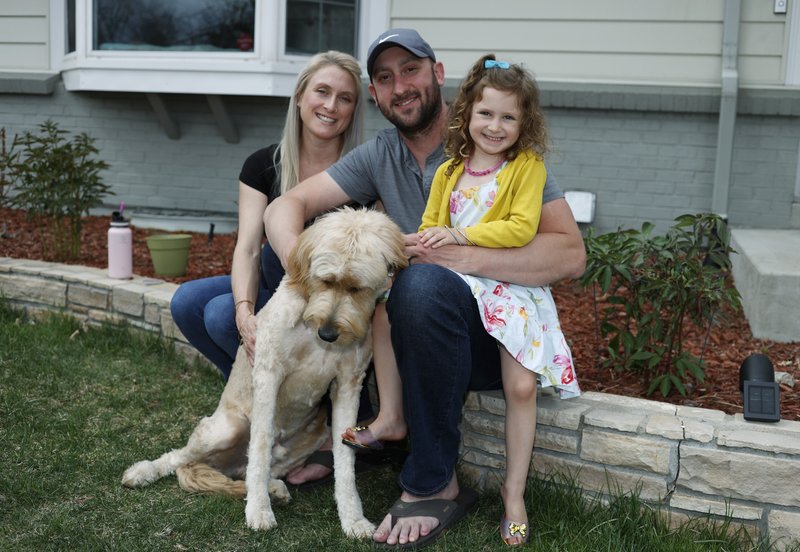 Eli Oderberg, center, sits with Katie Evers, left, their 4-year-old daughter, Everlee, and the couple's goldendoodle outside their home in southeast Denver on Thursday, April 30, 2020. Oderberg, like 30 million people around the United States who have filed for unemployment benefits after losing their jobs during the coronavirus pandemic, is facing the specter of paying the monthly rent with the flip of the calendar. (Photo: AP)

Rent and mortgage payments are due again for more than 30 million people around the U.S. who have filed for unemployment benefits after losing work in the coronavirus pandemic.

Jason W. Still has been waiting six weeks for his first unemployment check since losing his job as a cook at an upscale restaurant in Spokane, Washington. Out-of-work bartender Luke Blaine in Phoenix got his first check three weeks ago, but now has to pay his landlord again.

And Eli Oderberg in Denver has his mortgage due after being swept up in a later wave of layoffs as the pandemic’s effects spread from restaurants to corners of the economy, like the oil company where he had worked on apps to track spills and leaks.

Federal data released this week show the U.S. economy contracted at a 4.8% annual rate last quarter as the pandemic put the nation into a recession. Economists expect January-March to be just a taste of the widespread pain being recorded for April-June. And while a record number of people have applied for unemployment insurance payments, there are many other out-of-work people who don’t qualify or couldn’t get through the states’ overwhelmed systems.

More than three dozen cities and states, including San Francisco, Los Angeles and New York state, have put in place their own policies to halt evictions, foreclosures and utility shutoffs out of concern that the economic fallout from massive job losses will push many people to the brink of homelessness at a time when they need to stay in their houses and apartments.

But all this really means is that deputies won’t be knocking at their doors, for now. The money is still due, and delaying the payments just puts off the pain.

Still said he’s filed for unemployment every week, with nothing yet to show for it, since he was first interviewed by The Associated Press a month ago, just before he paid April rent. His wife still has her job in the legal marijuana industry, and his $1,200 stimulus check helped pay an assortment of bills. “But I’m about to hit my savings and I really don’t want to do that,” he said.

“I’ve made about 900 calls over the last month trying to find out what’s going on,” Still said. On April 24, he finally got into an on-hold queue behind 83 other callers to Washington state’s unemployment office, and after hours of waiting, he was transferred to a claims specialist, but then the call was dropped.

It took him until this week to reach a human, who said there seemed to be a minor glitch in his file that needs to be worked out.

“It seems to be getting closer, but it’s not clear to me what’s going on at that end,” said Still. “I think I’m the last person who was laid off at my restaurant who hasn’t gotten an unemployment payment yet.”

The restaurant, Clover, remains in limbo. Washington Gov. Jay Inslee this week announced a partial opening May 5 of some recreational offerings like state parks, fishing and golf courses, but restaurant dining rooms and most other businesses will remain closed for now.

Blaine counts himself lucky: He started receiving unemployment checks three weeks after being laid off on March 17. Several coworkers are still waiting for their money after losing their jobs at Fez, a popular restaurant in Phoenix.

“I feel very fortunate based on what I’ve heard from my friends here and around the country,” said Blaine, who also was interviewed by the AP a month ago. His boyfriend, Kyle Schomer, still has his job in the tech industry, and is working from their home in a trendy neighborhood of adobe homes. They have a huge vegetable and flower garden out back.

Blaine also said that he and everyone else he knows have received their stimulus money. With that and the unemployment checks, which through July include an additional $600 per payment, Blaine has made ends meet, for now.

“We will be back,” Fez management promised on the restaurant’s Facebook page. “We hope sooner rather than later.”

Anything but an opening soon is unlikely resolve the anxieties of people whose savings are running out as the initial wave of service-industry layoffs sweeps up other hard-hit sectors, like energy.

Oderberg lost his job in Denver on April 19, as global oil futures plunged into negative territory following the shutdowns of air travel, factories and commuting around the world.

He said his wife got her first unemployment check after losing her job in retail, but he’s still waiting for his. The Colorado website for benefits has confirmed he is eligible, “but I haven’t been able to get through to talk to anyone after making about 100 calls each time,” he said.

In the meantime, Oderberg has been lining up job interviews in information technology, including at least four this week, and hopes to land something quickly, before he has to scramble for their next mortgage payment for the house he shares with his wife, who is pregnant, and their 4-year-old daughter.

“From my job, I’m accustomed to planning everything six months in advance,” said Oderberg. “So we’re going to be OK, for now at least.”