Jordan, a blockbuster location for Hollywood 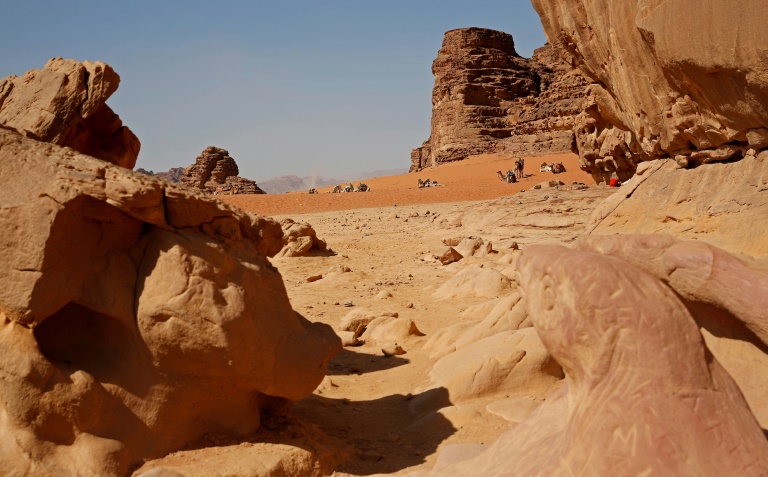 Jordan's Wadi Run desert, also knows as Valley of the Moon, has served as a backdrop for many Hollywood blockbusters including Lawrence of Arabia and the last episode of the Star Wars saga. (Photo: AFP)

The lunar landscape of Jordan's Wadi Rum valley gets a starring role this week when the next and final episode of the Star Wars saga opens to global audiences.

The spectacular desert, with its shimmering red sands, majestic dunes and stunning rock formations was also where Peter O'Toole was filmed riding his horse in the 1962 epic "Lawrence of Arabia".

From Matt Damon in "The Martian" to Will Smith in Disney's "Aladdin", Jordanian authorities have worked to ensure the country's diverse landscape features in some of Hollywood's biggest blockbusters.

"When you travel to locations everything changes inside of you," Smith told a news conference earlier this year in Jordan's capital Amman.

"When we landed in Jordan all of a sudden you begin to embody the feelings of the characters like when we were in Wadi Rum... it was absolutely spectacular."

Jordan's Royal Film Commission was set up in 2003 to promote the country as a "huge open air studio", says its managing director Mohannad Al-Bakri.

To entice foreign filmmakers, the commission -- chaired by Prince Ali, one of King Abdullah II's half brothers -- offers financial incentives.

Production companies can enjoy a cash rebate of between 10-25 percent for a minimum of $1 million (0.9 million euros) spent in the kingdom, as well as tax exemptions on equipment imported for filming.

Petra and the holy grail

But filmmakers also come to Jordan to shoot because they are attracted to the diverse and rich landscape they find in the desert kingdom, according to Bakri.

Over the years dozens of foreign and Arab movies have been filmed in the country, including Hollywood classics such as "Indiana Jones and the Last Crusade".

Steven Spielberg's 1989 movie starring Harrison Ford brought to the big screen the magic of the rose-red archaeological city of Petra, famed for its ornate temples cut into rock.

The stunning and well-preserved sandstone facade of Petra's Al-Khazneh (Treasury), which some say dates back to the first century BC, featured as the entrance to a temple housing the Holy Grail.

Parts of Disney's Aladdin remake was filmed in Wadi Rum -- "the natural choice" for us, director Guy Ritchie told reporters in Amman in May.

Naomi Scott, who played Jasmine opposite Smith, said: "it is beautiful."

"Like Will said it makes perfect sense... when you are in an environment like this" it helps enforce the character the actor is trying to portray.

"There is such a peace out there in the desert. There is nothing like it," he told the same news conference.

Wadi Rum served as the backdrop for director David Lean's award-winning "Lawrence of Arabia" which critics have described as perhaps the best, or second best, film ever made.

"Rogue One: A Star Wars Story" was also filmed in the breathtaking desert, which is often known as the Valley of the Moon, before the location was again chosen for the saga's latest and final episode, "The Rise of Skywalker".

Munir Nassar, managing director of Zaman Project Management, a production services company in Jordan, said it took five months to prepare for the filming of the last Star Wars instalment.

"When the actors came (to Jordan), filming was completed in 12 days and then they left," Nassar, an ex-tourism minister, said.

His company was also involved in the filming of four other movies in Jordan, including "Mission to Mars", providing everything from meals to hotel bookings and transport.

"The unique, timeless and diverse landscape of Jordan, along with its highly motivated production crews, makes it an ideal destination for filming," Prince Ali is quoted as saying on the film commission's website.

The picturesque town of Madaba south of Amman has been used to replicate old Greek villages while the Azraq westland natural reserve east of the capital has served to recreate South Asian regions.

Iraq war film "The Hurt Locker", which won Oscars for best picture and best director in 2010, and the thriller "Zero Dark Thirty" about CIA operatives tracking down Osama bin Laden were also filmed in Jordan.