Just a bit outside! Uecker throws out NLCS 1st pitch

The pitch from Bob Uecker was, predictably, just a bit outside. 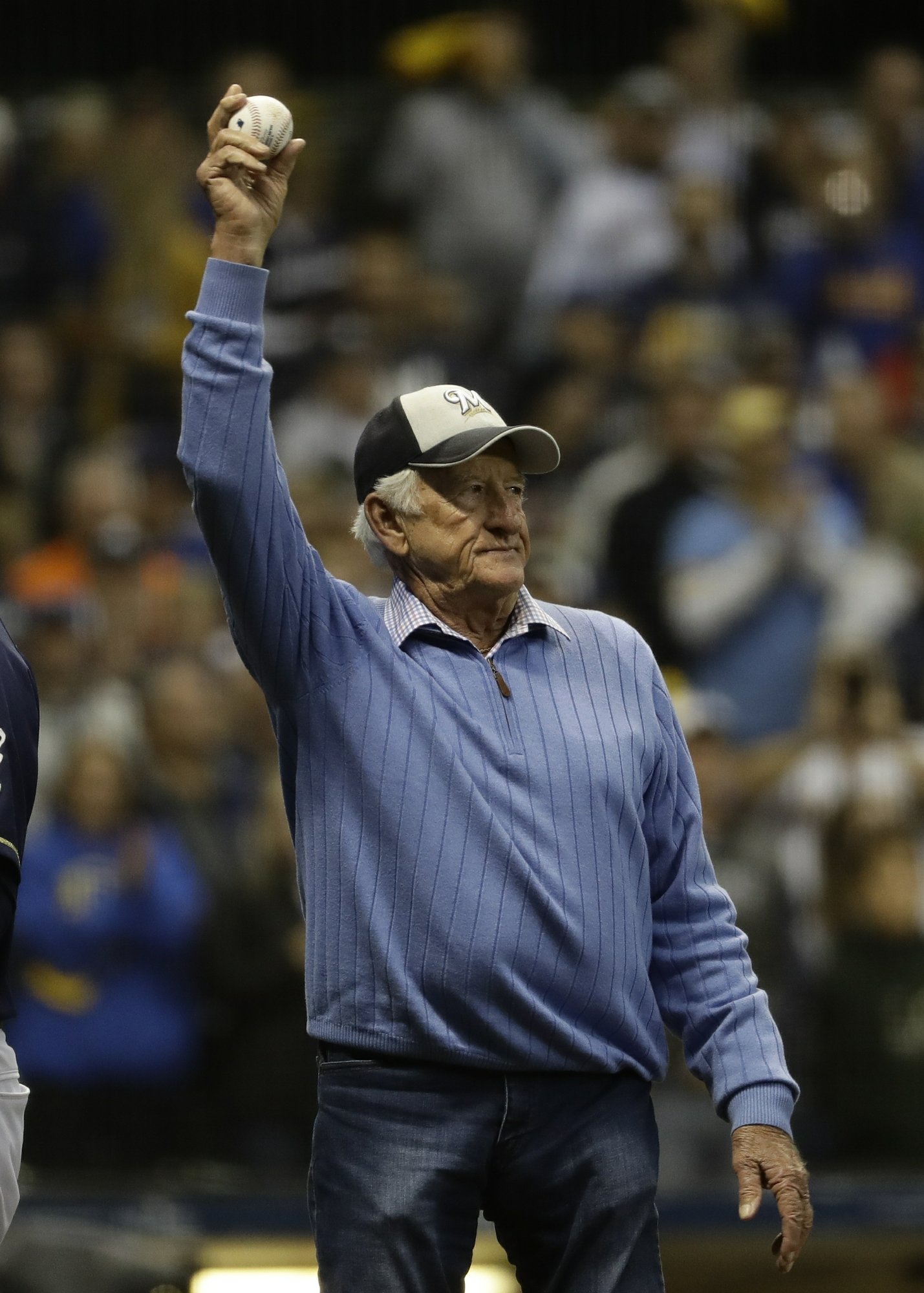 Bob Uecker throws out the ceremonial first pitch before Game 1 of the National League Championship Series baseball game between the Milwaukee Brewers and the Los Angeles Dodgers Friday, Oct. 12, 2018, in Milwaukee. (Photo: AP)

The Milwaukee Brewers announcer is always good for a laugh, even before the first game of the NL Championship Series.

“Bob will be throwing out the (ceremonial) first pitch tonight,” a press conference moderator said as Uecker walked to a podium a couple hours before the Brewers hosted the Los Angeles Dodgers at Miller Park.

“I am,” the straight-faced Uecker joked quizzically.

There is perhaps no better ambassador for Brewers baseball than the 84-year-old Uecker.

In his 48th season calling Brewers games, Uecker is beloved in his hometown of Milwaukee for his dry wit and entertaining calls.

The Brewers have two statues dedicated to Uecker at Miller Park, including one in the last row of the upper deck that commemorates one of Uecker’s commercials for Miller Lite in which he repeated the phrase “I must be in the front row!”

He remains an important member of the Brewers, considered as much a part of the organization as MVP candidate Christian Yelich or veteran outfielder Ryan Braun. 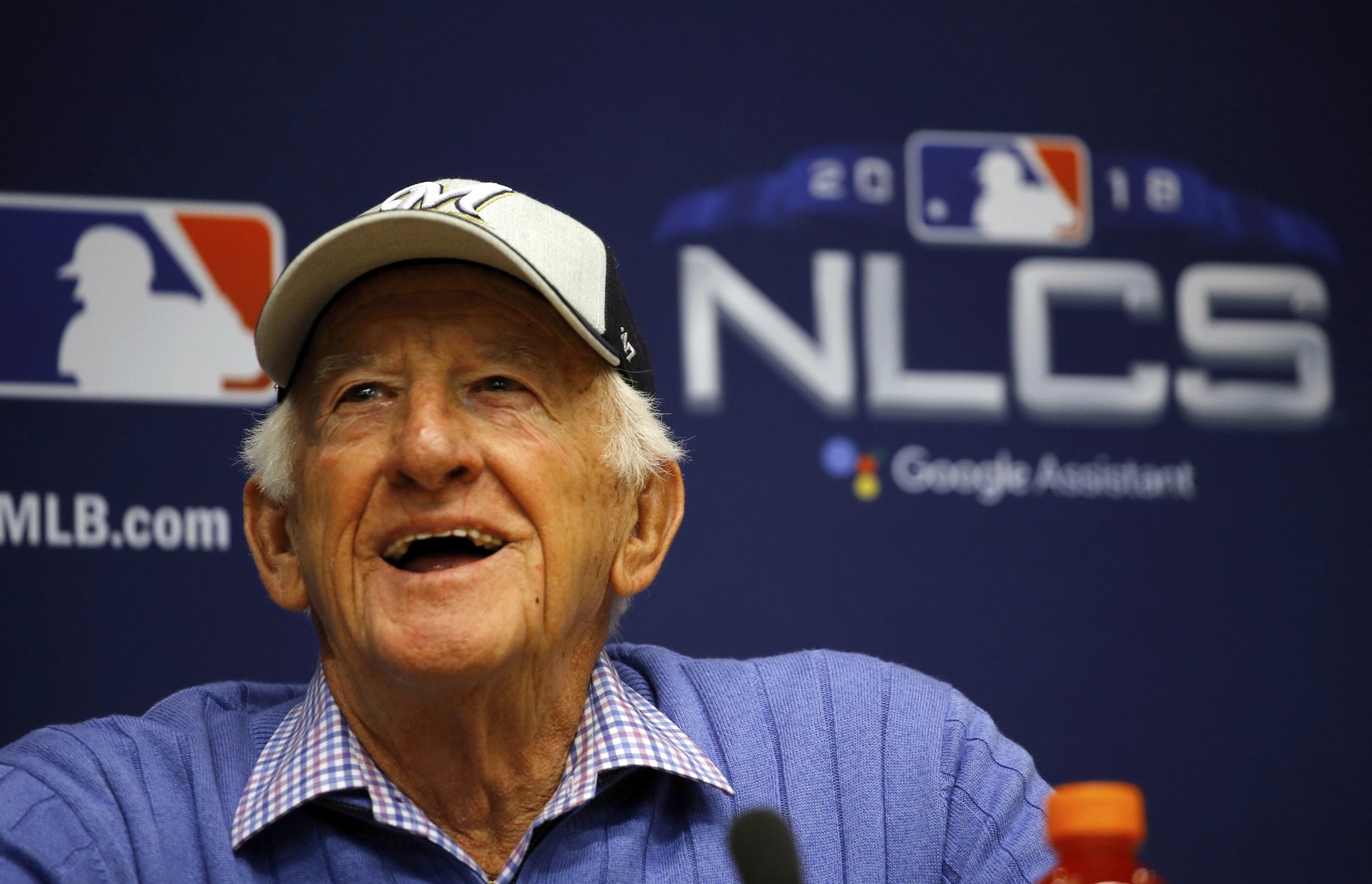 Milwaukee Brewers sportscaster Bob Uecker speaks at a news conference before Game 1 of the National League Championship Series baseball game between the Milwaukee Brewers and the Los Angeles Dodgers Friday, Oct. 12, 2018, in Milwaukee.

A Hall of Fame broadcaster, Uecker can relate to the current generation of players in different ways.

First off, he’s a former major league catcher, having played six years with three teams. His career ended in 1967, when the lifetime .200 hitter managed just a .150 average playing with the Phillies and Braves.

“Well, I think for the most part they know that I played, and I think that’s where the relation really comes in,” Uecker said.

“I’ve been on the same side where you’ve got a 10-game losing streak. You’ve got to talk to the press. It’s not sometimes the most pleasant thing, but you have to do it. And I know what that’s like,” he added.

He also starred in the TV series “Mr. Belvedere” and the movie “Major League,” two sequels to the baseball franchise - though don’t get him started on the third one.

“The third one stunk,” he said. “It was really bad. I could have played in that one.”

But he is thoroughly enjoying the Brewers’ run to the NLCS in their first postseason appearance since 2011.

“And I think the bottom line is that Bob ... belongs in a baseball clubhouse. He fits. He gets it,” manager Craig Counsell said. “His sense of humor doesn’t have an age span.”

Cover photo: A worker gets the field ready for Game 1 of the National League Championship Series baseball game between the Milwaukee Brewers and the Los Angeles Dodgers Friday, Oct. 12, 2018, in Milwaukee.